While many Americans may pronounce the 2015 SCOTUS Decision ‘OBERGEFELL ET AL. v. HODGES, (No. 14–556)’ as the law, and must be obeyed immediately, our US history will show many instances of SCOTUS’s ‘wrong’ rulings.

The OBERGEFELL ET AL. v. HODGES decision is certainly one example as another one of these ‘wrong’ SCOTUS verdicts.

Over the years, many Americans have chosen to oppose other earlier and unacceptable SCOTUS ‘Decisions’; based on ‘wrong’ SCOTUS findings:

1.  Scott v. Sandford (1857) (60 U.S. 393) SCOTUS ruled that African Americans, whether enslaved or free, were not citizens of the United States.  African Americans did not have the right to sue in federal court.  SCOTUS ruled that the federal government could not prohibit slavery in the territories.  Later, the 14th Amendment to the Constitution provided that anyone born or naturalized in the United States is a citizen of the nation and of his or her state. https://www.law.cornell.edu/supremecourt/text/60/393

At this point, may I suggest that this must have included ‘legally’ born, and not for those born ‘illegally.  As an analogy, when a criminal robs a bank, it is crime.  It is an ‘illegal’ act.  Just getting away does not allow the robber to keep the money.

2.  ROE v. WADE, (1973) No. 70-18  SCOTUS declared a pregnant woman is entitled to have an Abortion until the end of the first trimester of pregnancy without any interference by the state. https://www.law.cornell.edu/wex/roe_v._wade_1973

One of my first classes in Army’s Basic Training at Ft. Bragg, NC, we were taught and/or reaffirmed was to always uphold our USA, our Constitution, and our American flag.

The incident of Kim Davis being jailed as she refused to honor our Judiciary’s conclusions with the SCOTUS ruling was and is ‘wrong’ as a majority members of SCOTUS have overruled our Constitutional 1st Amendment’s ‘Freedom of Religion’.

It appears a majority of SCOTUS Justices have disregarded our Constitutional ‘freedoms’ as determined by our founding Fathers based on Judeo-Christian values.  Our historical ‘Federalist Papers’ will substantiate these findings as facts. http://thomas.loc.gov/home/histdox/fedpapers.html

In SCOTUS’s majority decision rejecting ‘God’s Law’, our Holy Bible, as addressed by many of our Founding Fathers,  it could well be compared to Rev. Martin Luther King’s decision on ‘Civil Rights’.

Many other instances in US History will disclose that many Americans have been rejected on other Constitutional ‘Rights’; members within (y)our majority and minority communities across the USA.

Today is a sad day for a SCOTUS majority of Justices to disallow our US Constitutional freedoms, including our 1st Amendment’s ‘Freedom of Religion’, and based on Judeo-Christian values to be disallowed as the ‘law’ of (y)our precious nation.

Looks like our invincibly arrogant Supreme Court is on a Progressive roll--a veritable steamroller of errant and overreaching Delphic rulings quite at odds with our Constitution.

On the heels of the Court's outrageous ruling yesterday on Obamacare, here it goes again by "ruling" that same-sex marriage is a "constitutional right". Huh? Constitutional right? This ruling is much more than mystifying; it is subversive.

While the same-sex ruling was entirely predictable--no less so than the Obamacare, aka SCOTUScare, ruling yesterday--I am no less stunned by this judicial quackery and lawlessness.

Thinking I may have missed something along the way, this morning I carefully re-read my copy of the Constitution, and for the life of me I couldn't find marriage of any kind defined as a "constitutional right". Nowhere! In fact, marriage isn't even mentioned in the text.

Per the 10th Amendment of the U.S. Constitution, any power not specifically/expressly delegated by the States to the federal government remains with the States and the People. Thus, defining marriage is a State power and same-sex marriage is constitutional ONLY if the individual State and its citizenry says it is. This isn't rocket science, folks. It's  the law. And the obscene misapplication of the 14th Amendment's ""equal protection" clause yet again cannot nullify the authority of the 9th and 10th Amendments. Only a constitutional amendment can do that.

Just what Constitution are these Progressive judicial oligarchs reading? Have they even read the Constitution? And, if so, do they at all regard the US Constitution as the supreme law of the land? Obviously not. Clearly, Judicial Supremacy has virtually supplanted Constitutional Supremacy. And therein lies the seed of our self-destruction.

Wouldn't it be splendid--indeed, principled and courageous--were the States to exercise their lawful authority by NULLIFYING this outrageous judicial usurpation of State sovereignty? Without spine and political courage at the State level, the US Constitution is, without question, D-E-A-D and this "constitutional republic" but an illusion.

Until this judicial tyranny is stopped, what precious remains of this tattered constitutional republic will be relegated to the dustbin of history.

I do not see a good end to this lawlessness. As to a remedy, let our Founders be our guide ... 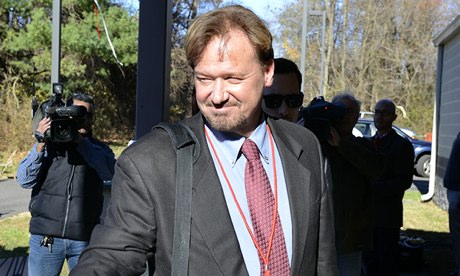