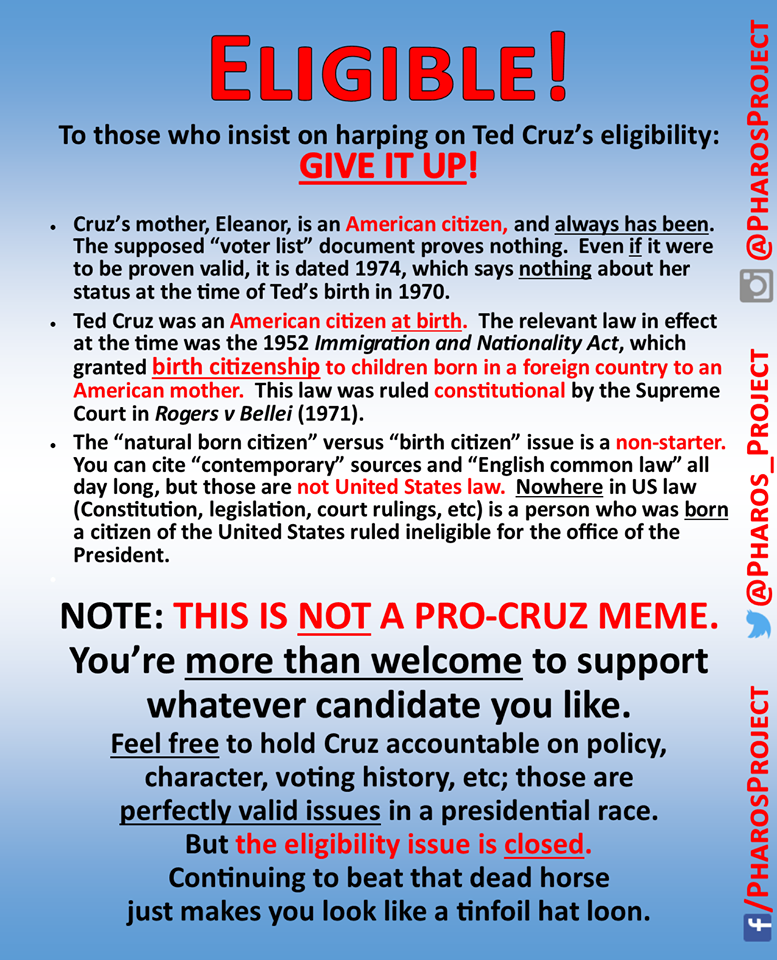 For all, many courts across America have ruled on the eligibility of Sen. Ted Cruz for POTUS.  Will everyone listen?  The settlement has been resolved by SCOTUS.

Our US Constitution is founded on 3 ‘equal’ branches of government; Executive, Legislative, and Judiciary.

Our Founding Fathers had the wisdom of knowing that someday, one branch of government may go awry in a determined effort to destroy our Constitution, and America.

These ‘wise’ authors inserted a ‘check and balance’ so that in event one branch of government goes astray, another branch may be able to stop the activism, save our Constitution, America, and our American flag.

Activism has met its moment of activism with the unexpected death of Justice Antonin Scalia.  American voters have chosen a POTUS to the Executive branch who has intertwined and continues to distort the structure as permitted within the Executive branch; to be the administrator of government, and to serve as the ‘Commander in Chief’ of the Armed forces of the United States.

POTUS lacks the authority to write, dictate, or otherwise demand new laws.  Many of President Obama’s ‘Executive Orders’ are directed outside the privileges of our Constitution.

President Obama’s and the Democrat Party’s ‘left-wing’ activism must be stopped in an effort to save our Constitutional freedoms based on Judeo-Christian values.

The Legislative branch of government; the US Senate is the ‘balance’, as constitutionally defined.  President Obama may appoint a ‘left-wing’ Justice who may vote changing activism into a reversing 5 to 4 vote.

The Senate must refute any Obama nominee who may dishonor, disobey, or destroy America’s Founding Fathers’ wisdom.

There is nothing wrong with our Constitution.  It must remain intact, be enforced, and honored based on Judeo-Christian values.

Another problem is that American voters with personal ‘greed’ elect nominees without any future visions to the costs of all; as our mounting national debt exceeds $19 Trillion.