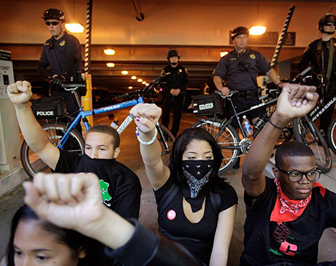 On Friday, in the closing days of the presidential election President Barack Obama encouraged his supporters in Ohio to head to the polls on Tuesday with hateful revenge in their hearts.  He shouted out that this election result must be about revenge and not about America’s noble principles, values or even future.  This runs counter to his post 2008 election, when he implored Americans to accept his word that he would usher in a new type of non-partisan presidency.

Obama used revenge as his clarion call to battleground state, Ohio, to top off the last hours of his campaign. Is hate and revenge truly what undecided voters are searching for?  Should Americans embrace the insidious nature of his closing argument for the courtroom of the American public?  Consider how the true nature of Obama has lowly become unmasked.  His hate-filled attack ads were reminiscent of his religious mentor and teacher Rev.  Jeremiah Wright.

Why should Americans be surprised?  This president lied about being present when his religious mentor Rev. Wright spoke with venom in his voice about hate. Remember, in 2003 he shouted from his pulpit, “God Bless America.’ No, no, no, God damn America!”  Obama after doing some fancy verbal footwork, around the issue, quickly threw Rev. Wright and his association with him, under the bus.

So, Obama is not unfamiliar with hate or with use of revenge as a useful tactic.  Contrast Obama's behavior with Romney’s revenge voter edict. Romney insisted that Americans should go to the polls on November 6th, “to vote “for love of country!”

Imagine that, “love of country.”  Not unique for a true leader who truly loves his country.  Not unique for a presidential candidate who believes in building up a nation and its future instead of a president stumbling through  four years of mediocrity, incompetence and multi-trillion dollar deficits.

But think about it a minute.  What was President referring to when he asked supporters to take revenge to the polls on November, 6th?   What type of revenge could he be considering?  After all the “Blame Bush” rhetoric is a dog that will not hunt anymore.  Could it be a diversion away from his unwillingness to leave no one behind in the murders of four Americans in Benghazi?  Could it be that the October surprise is that Islamic world tour apologies will no longer cut it with the American public, grown tired of excuses?

Worst yet, could President be a real life Manchurian Candidate who through is youthful foreign travels and Muslim upbringing is truly contemptuous of America as a Judeo-Christian nation?  So consider again the narcissistic placement of the word “revenge” in taking it to the polls on November.  Is Obama a possible foil for socialism or other “ism” that was hatched by his ideological mentor and admirer of Satan, Saul Alinsky?  In fact it was Saul Alinsky who gave a supportive nod in his book, “Rules for Radicals to Satan.  ( read more )

The latest budget news has Oregon State Director of Athletics Bob DeCarolis suggesting that if their recently announced fund raising efforts are not successful the Beavers may be forced to drop teams.

To be sure, fall's exact enrollment numbers won't be in for a few more weeks, as students can still enroll or unenroll from classes.  Nonetheless, preliminary numbers suggest Oregon schools have used stimulus dollars and tax measures to make way for tens of thousands of new students this fall.

OSU
For Oregon State University in Corvallis, where the brother-in-law of the current U.S. President coaches basketball, record enrollment has translated to longer lines and greater competition for everything from classes to parking places.

OSU officials say they expect an estimated 24,000 students this year – marking another record enrollment year. Student registrations have grown gradually over the school's 142-year history. However, within the past three years the pace has increased dramatically.

Why the jump? According to The Oregonian, OSU joins other Oregon universities trying harder to retain students. This comes after the newest numbers show one in five freshmen usually quit in the first year. The O also reports such universities as OSU are hiring additional support staff: enlisting more advisers, tutors and mentors and expanding programs to help students manage everything from course load to finances.

This comes as OSU spends its American Recovery and Reinvestment Act dollars, including $252 million in federal research grants and contracts earned in 2009. The school's website reports the $252-million amount is "more than that received by all other Oregon public universities combined."

Some of the funding for expansion also came from state stimulus dollars. These funds were approved for "capital construction" projects as part of Oregon Senate Bill 338. For example, OregonLive.com reported that $500,000 in state stimulus money paid for part of a $3.7 million renovation of OSU's Gill Coliseum, where the Beavers play basketball.