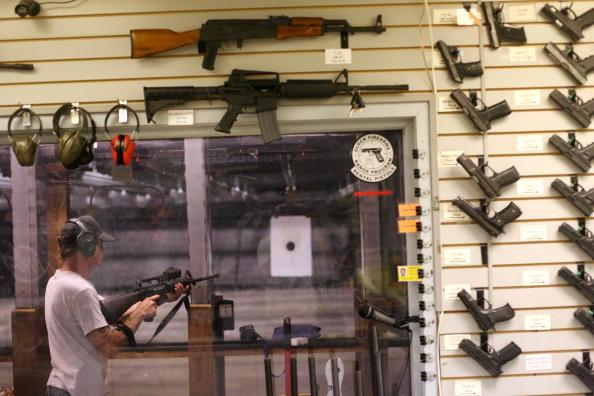 On Sunday night, NBC sportscaster Bob Costas decided during a Halftime break to tell America that your Second Amendment gun rights should be dialed back if not eliminated. He was reacting to the Saturday morning murder-suicide committed by Jovan Belcher, former linebacker for the Kansas City Chiefs. According to police officials, Belcher’s chose a gun to murder his 22-year-old girlfriend Kasandra M. Perkins, in an apparent domestic violence dispute.

Did Costas misuse his position as a sports commentator to decide upon his own, without knowing the factual circumstances of the domestic dispute? Was he legitimate in broadcasting a determination before law enforcement authorities had completed their investigation, of Belcher’s use of a gun to commit both her murder and his suicide? Should he have linked the murders to a condemnation of legal gun owners in 43-55 million households in America?

While the nation grieves for the murders which are devastating for both families and the young 3-month old child of the dead parents, Bob Costas decided to become judge, jury and executioner of the Second Amendment guarantees, by issuing a political verbal assault during the halftime show of the game between the Dallas Cowboys and the Philadelphia Eagles.

There is a line in the sand that legitimate law abiding gun owners must draw and it must be firmly placed and unmovable. The use of the public airwaves to continue the assault against the U.S. Constitution is not something that should be continuously witnessed nor permitted to go unchallenged.

Why didn’t Costas do his homework before he went on the air with his fictional beliefs? Sure, there has been an increase in firearm ownership. In fact, there are approximately 43-55 million households in America with guns, which is about 43 to 50% of US households. Yet, what Costas neglected to mention is that with the increase of legal gun ownership in America, there has been a steady decline of murders due to gun violence. An armed American is a safer American.

Instead, Costas plays upon the fearful images that are fortified in the conscious of the nation, by media imagrey of horrific assault and murders of innocents like Aurora, Colorado's murder in July. With the attack by shooting suspect James Holmes charged with 24 counts of first-degree murder, liberal gun control advocates targeted the Second Amendment as the convenient villain.

NYC Mayor Michael Bloomberg demanded more detailed gun control measures from both presidential candidates, Obama and Romney. He stated in July, “I can tell you what we do here in New York. The State Legislature passed the toughest gun laws.”

It must be very comforting for families of victims who could not fight back, that with New York State’s stricter gun controls the murder rate has remained close to the current 4.0 and 4.05 per 100,000 as it has for last several years. In New York City, the tough “Stop and Frisk” measures have been attributed by law enforcement as the real solution to the lowering of gun murders in New York City, not tougher gun control laws.

So where does that leave law abiding citizens who continue to be victimized by liberal media pundits, as well as network news and sportscasters who feel compelled to interject personal opinions and nonsensical fabrications and cast them into cement as news?


http://www.washingtontimes.com/weblogs/watercooler/2009/oct/16/video-juan-williams-responds-racial-attack/
Obama Losing Liberal Californians
Black Liberal Insults Black Moderate
I. A recent poll of Californians showed that only 45.6% of the Golden State’s voters approve of the job done by Barack Obama as president while 49.6 DISapprove. 34.0% of Californians believe the country is going in the right direction while 61.2% say America is on the wrong track. Congress (headed by California girl Nancy Pelosi and Nevada’s Harry Reid gets only 24.6% approval and 69% DISapproval. California’s Generic Congressional Preferences show a virtual tie with Republicans receiving 43.8% support and Democrats 43.6% in a generic survey.

II. A Black radio talk show host went on national TV on FOX News’ The O’Reilly Factor and when it appeared he was losing his debate with FOX contributor and frequent replacement-host Juan Williams (who is also Black), Warren Ballentine implied that Williams was not “a real black person” and then added the racial slur, “It’s OK, you can go back to the porch, Juan.” The code term “go back to the porch” is Blackspeak for “Uncle Tom,” “House Nigg_r,” or “Slave-brown noser.” Of course, Ballentine refused to respond to information that many of the people who wanted Rush Limbaugh dropped from the potential new ownership consortium for the St. Louis Rams were playing fast and loose with the truth. To top matters off the next day, Ballentine was literally bragging on his radio show about his insult to Williams. So the liberal keepers of political correctness can use racial slurs and can invent willy-nilly intolerances that don’t exist; racism that doesn’t exist; and accuse patriotic conservative people of stupidity and being haters falsely . . . and that’s always OK, huh?

Their original argument was about Rush Limbaugh being criticized by some NFL blacks who don’t want him owning an NFL team and by Ballentine. Williams showed that a Black LA Times columnist had created the “Barack the Magic Negro” song that Limbaugh revealed to his listeners and that Limbaugh was just reporting on the growing disgruntlement with Obama across the board. When Ballentine realized that he’d been caught not doing his homework, that’s when he got “nasty.”

Later when Williams was a substitute host for O’Reilly, he showed that the leader of the NFL attempt to reject Limbaugh’s ownership is a black man who was extremely close to Obama and a big part of his 2008 campaign. Williams also translated for White folk the insult he’d been given and intimated that Ballentine was “not a man” because he hadn’t apologized for his crudeness but actually bragged about it instead. Williams also spoke with a Black ex-NFL player, the Reverend Ken Hutcherson, PhD., who called Limbaugh “my friend” and “decent” and said that he was “very angry about the lies used against Rush.” The pattern is clear . . . .

Item: Clarence Thomas is a conservative judge who was pulled through the ringer by false claims of sexual harassment over a decade old during his confirmations. The “lady,” raising the charge for the first time, was apparently so “off-put” by her first experience that she deliberately transferred jobs so that she could then claim continuing harassment by Thomas for a new employer which she also never made until Thomas's confirmation hearings. She was also a lawyer who had the wherewithal to stand up for herself immediately IF such outrageous conduct ever happened (Conclusion: it never did); and all without being able to show one shred of real evidence. Compare that to the National Organization of Women (NOW) and feminist reporters complete absence of censure for the continuing 20-year pattern of philandering and sexual harassment by their golden boy Slick-Willy Clinton who admitted to lying and . . . oh, yes, there was that semen-stained blue dress wasn’t there? By the way, Thomas has also been criticized for having a wife who is White and a conservative.

Item: The reason that Andrew Breitbart ran his clip of Shirley Sherrod's speech (which created the huge uproar) was totally overlooked, perhaps deliberately by the mainstream media (MSM). Sherrod was speaking before the National Association for the Advancement of Colored People (NAACP) and Breitbart's point was that even though the listeners didn't know the "outcome" of her anecdote they were snickering and laughing when she admitted her racism in dealing with the White farmer . . . . Since 4.2% of Blacks voted for McCain and just short of 48% of Whites voted for Obama (more than Gore or Kerry received) it's time we admitted that Black racist conduct is alive and well . . . and time we lightened up on "racist" charges against Whites when they're undeserved.

Item: Actor-singer Harry Belafonte called Colin Powell “a house slave” when many were considering him an ideal presidential candidate. Compare the experience and solid credentials and patriotism of Powell to the man in the Oval office today.

Item: Clarence Thomas was depicted as a “lawn jockey” on the cover of prominent Black magazine Emerge in 1996.

Item: The NAACP applauded a preacher telling their convention how he and other Blacks beat up a Black entrepreneur selling “Audacity of Dope” buttons (depicting Obama with a joint between his lips – the man had made a fortune selling Pro-Obama buttons in 2008) and in the telling calling the man “Uncle Tom” and “Oreo” (White on the inside) and “House Nigg_r.” The four assailants were arrested for their criminal behavior but applauded loudly at the NAACP convention nevertheless.

Item: Just as conservative women are pounded by the Liberal media as some sort of Judases, Black and Hispanic conservatives are insulted and threatened continuously. Blacks at TEA Party events are insulted and receive innuendo of “stupidity” by mainstream media (MSM) interviewers who usually refuse to run the resulting stories (which only get run because FOX News was there covering the MSM’s treatment of the TEA Party at the time). Harry Reid recently made the patronizing remark that he didn’t see “how any Hispanic could ever vote Republican.” And elected Black and Hispanic Republicans are just never interviewed by the MSM in Washington or New York, etc. (outside of their own districts and states).

Item: Black and Hispanic CEOs and entrepreneurs likewise are among the missing on MSM business coverage unless their business is funded by the federal government.

Item: Former leftist, now moderate, lesbian talk show host Tammy Bruce outlined the Obama administration’s; the NFL players’ Union’s; the Black establishment’s and the MSM’s coordinated attacks upon Limbaugh since he first attempted to become an NFL owner on the show with Williams. She detailed how when she was on the left, these kind of attacks were common but that she’d never seen such a powerful coordinated effort as the one made by the left to destroy the name of Rush Limbaugh. Bruce, by the way, has received a lot of heat for her "constant criticism of the left and Obama's job performance."

Item: Racial incivility and “racism” claims by the left have reached new lows (or is that new highs in "lowness") since our “post-racial” president took office.