I didn’t want to do this…but because of the abject stupidity of it, I now feel compelled to issue this article and address it to specifically those…whatever they were…at last weekend’s parade of pussies in Washington DC.

What in THE hell, were you bunch of drooling, slobbering liberals thinking?

Seriously…you wanted to have a voice…you had the biggest stage imaginable…you wanted yourselves and whatever cause it was you claimed to represent to be taken seriously, and you dressed up like clowns from a circus of hookers, drew up vulgar signs and pranced about like a 500,000 member gaggle of shrieking, malcontented, pissed-off sufferers of PMS pansies.

In just 24 hours, you mangy morons managed to show more disrespect, more abject hatred of your own gender and did more to demean your cause that President Trump could possibly do in a lifetime.

And speaking of gender…

It’s time to call them exactly what they are. Except for the date, 1984, George Orwell had it right.

Replete with doublespeak, innuendos, and outright falsehoods, the Inauguration speech given by Barack Hussein Obama to launch his second term was a verbal déjà vu of the 2009 $787 billion stimulus package…a wish list for “progressives.”

The full blown Orwellian hypocrisy was on clear display before Obama even opened his mouth. 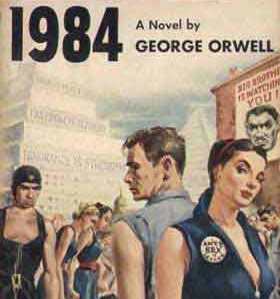 Beginning with an invocation where the United States was describes as “One nation…indivisible…with liberty and justice for all.”  What happened to “under God” in that invocation?  When does one give an invocation at a presidential inauguration where the words of the American Pledge of Allegiance are intentionally edited to omit the word “under God”, and why?

That this glaring omission would be immediately followed by a magnificent rendition of The Battle Hymn of the Republic was truly ironic.

Then the Oval Office occupant, who happens to be the most politicized, divisive, partisan human in Washington DC, who has openly launched multi-pronged assaults upon the U.S. Constitution, publically committed perjury by taking the oath of office.

After that, the utter hypocrisy in his inaugural address was spoken before a gathering roughly one third the size of the 2009 inaugural crowd.

Obama preached that: “Together, we discovered that a free market only thrives when there are rules to ensure competition and fair play.”

The American free market Capitalist system and free people making decisions that are in their best interests ensure competition and define fair play, not government interference.

He continued: “For we, the people, understand that our country cannot succeed when a shrinking few do very well and a growing many barely make it. We believe that America’s prosperity must rest upon the broad shoulders of a rising middle class. We know that America thrives when every person can find independence and pride in their work; when the wages of honest labor liberate families from the brink of hardship.”

A people, freed from the shackles of needless government involvement, built America into the most inventive, prosperous, generous and powerful nation in world history.  No matter how long or how often the Marxist mantra of equality is repeated, those recitations do not change that a people free to pursue their happiness within a free market Capitalist system have a better chance of achieving prosperity than do unionized government sector clerks working for a federal ministry.

Obama pronounced: “For we remember the lessons of our past, when twilight years were spent in poverty, and parents of a child with a disability had nowhere to turn. We do not believe that in this country, freedom is reserved for the lucky, or happiness for the few. We recognize that no matter how responsibly we live our lives, any one of us, at any time, may face a job loss, or a sudden illness, or a home swept away in a terrible storm. The commitments we make to each other – through Medicare, and Medicaid, and Social Security – these things do not sap our initiative; they strengthen us. They do not make us a nation of takers; they free us to take the risks that make this country great.”

When twilight years were spent in poverty?  Before big government socialist programs, which now account for over fifty percent of federal spending by a government that is over $16 trillion in debt and which borrows over forty percent of every dollar spent, one’s twilight years were spent living with family, who took better care of their elders with far more love and concern than is possible from an impersonal government bureaucracy where the elderly individual is little more than a number.

When parents of a child with a disability had nowhere to turn?  Disabled children were loved and cared for by their families.  When families looked for help, they looked to churches and private charities.  They did not look to a bureaucrat more concerned with their own salaries and benefits than with the public they allegedly “served.” 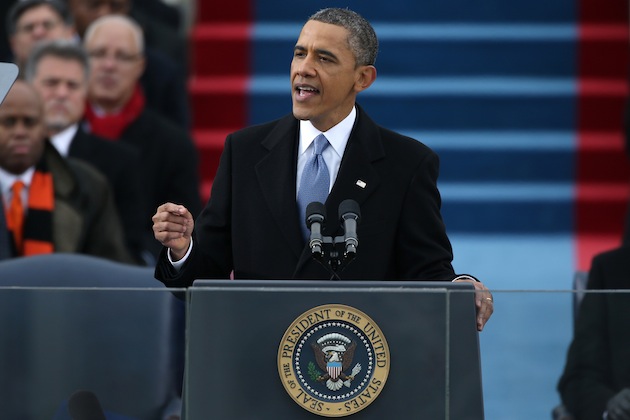 He went on: “We, the people, still believe that our obligations as Americans are not just to ourselves, but to all posterity. We will respond to the threat of climate change, knowing that the failure to do so would betray our children and future generations. Some may still deny the overwhelming judgment of science, but none can avoid the devastating impact of raging fires, and crippling drought, and more powerful storms. The path towards sustainable energy sources will be long and sometimes difficult. But America cannot resist this transition; we must lead it. We cannot cede to other nations the technology that will power new jobs and new industries – we must claim its promise. That is how we will maintain our economic vitality and our national treasure – our forests and waterways; our croplands and snowcapped peaks. That is how we will preserve our planet, commanded to our care by God. That’s what will lend meaning to the creed our fathers once declared.”

This is where another item on the “progressive” laundry list comes to light.  Here Obama reveals that based upon the junk science propagandizing “climate change” mythology, the disastrous waste of money on green energy companies and the lining of his political supports’ pockets at taxpayer’s expense will both continue unabated.

A true display of “progressive” doublespeak followed: “We will defend our people and uphold our values through strength of arms and rule of law.”

Through the strength of arms?  This coming from a politician who, despite the fact that Islamofascists are waging war on America, is bent on retreating from the battlefield, unilateral nuclear disarmament and reducing national defense?

Rule of law?  This from a fringe leftist career politician who chooses which laws his Attorney General enforces based upon their partisan political agenda?  Who ignores legally passed laws while violating the U.S. Constitution by dictating his own through Executive Order?

On foreign policy the newspeak was on crystal clear display: “America will remain the anchor of strong alliances in every corner of the globe; and we will renew those institutions that extend our capacity to manage crisis abroad, for no one has a greater stake in a peaceful world than its most powerful nation.”

America will remain the anchor of strong alliances?  This from someone who upon taking office shipped the bust of Winston Churchill back to Great Britain and who displays open disdain for Israel and its leaders?  Who continues to put Israel at existential risk by insisting on negotiating with an inflexible Iranian theocracy committed to Israel’s destruction?  Who rushed the withdrawal from Iraq, thereby squandering the blood, treasure and sacrifice spent to create another ally in the Middle East, and is rushing withdrawal from Afghanistan, risking that the Taliban and Al Qaeda will fill the vacuum?

Our wives, mothers and daughters earn a living equal to their efforts?  This coming from a White House 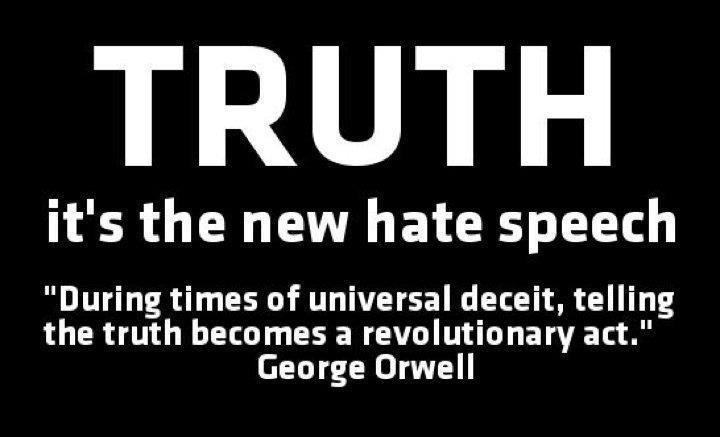 Promoting gay marriage, attacking voter registration laws, amnesty through immigration reform and disarmament of Americans through gun control will be on the Oval Office check list.

Then the ultimate in hypocrisy was revealed: “For now decisions are upon us, and we cannot afford delay. We cannot mistake absolutism for principle, or substitute spectacle for politics, or treat name-calling as reasoned debate.”

We cannot mistake absolutism for principle?  This from quite possibly the most inflexible absolutist in American political history?  The real crisis lies in “progressives” mistaking Americans standing on American principles for absolutism.

We cannot substitute spectacle for politics?  This from a non-stop political campaigner who is the poster child for photo-ops?

We cannot treat name-calling as reasoned debate?  This from a rigid political ideolog who lectures and scolds his political opponents over their choice of words but remains absolutely silent when his political brethren use far more incendiary, unreasoned and divisive words?

This was a declaration that once again the era of big government is at hand.

Unlike the great inaugural speeches of the past, this was not a call for national unity, but a call to arms for his “progressive” allies.

With this speech Barack Hussein Obama ensures that America will remain the divided States.  He confirms that compromise in any way shape or form is at the bottom of his list of priorities.  As was the case in his first term, the destruction of his political opposition remains his primary concern.