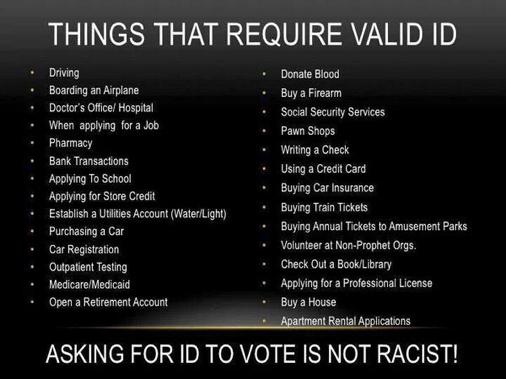 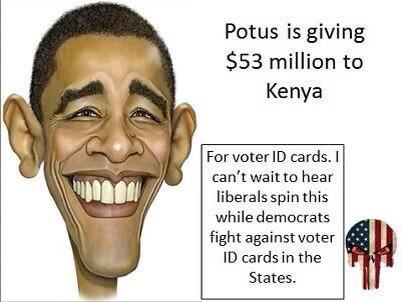 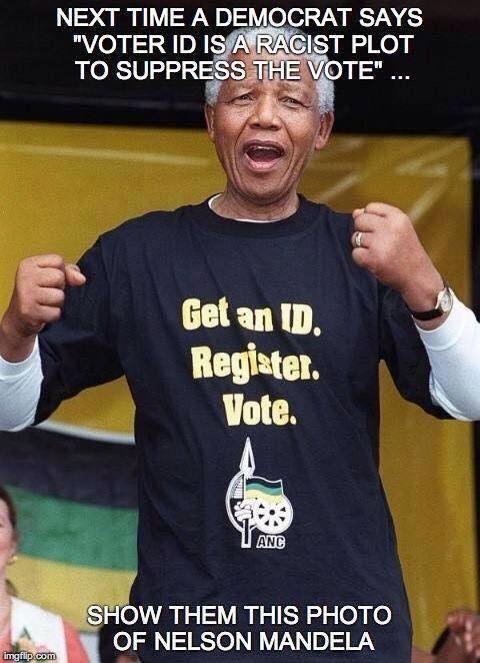 When will the Democrat Party and the NAACP recognize ‘Voter ID’ is a law with principle that will prevent voting fraud in our ‘precious’ election process?

The Democrat Party leaders continue with the NAACP to join together in a fight against ‘Voter ID’, a law with principle that will prevent voting fraud in our ‘precious’ election process. Upwards of 70% to 80% of Americans support ‘Voter ID’ but not the Democrat Party and/or their team supporting NAACP.

We, as Conservative Republicans, who choose to ‘protect the integrity’ of all ‘qualified’ voters in ‘each and every election’, acknowledge this method and defend the ‘qualified’ NC citizens who elect to protect our ‘precious’ election process.  It is sad that the Democrat Party and the NAACP are willing to ‘abandon and disregard’ these ‘precious’ freedoms.

‘Voter ID’ will not add any restrictions on voting rights; only protect each qualified voter’s precious election(s) process by testing to protect only one person per vote in each election period.

My latest blogs have concerned themselves with the means at our disposal to effect positive changes in the government.  During our discussion today I will be talking about the Tea Parties.  Yeah.  That pluralization is deliberate.

Let’s talk about three things in that regard.

There seems to be three tea parties in our country and they differ in kind.

There is The Tea Party Patriots with a web site located here. They claim to be the original and have three basic principles which almost all conservatives can agree on.

Then there is the Tea Party Command Center a somewhat pretentious name and organization that has fifteen “core values”.  All of them good, but they represent a shot gun approach to what is essentially a surgical situation.  Their primary benefit to the movement is their strict adherence to the first amendment and allowing any member to post blogs with any content.  Good site, but you sometimes have to get through the rants to find the good stuff.  Website here

Then there is The Tea Party Express.  The web site is here.  if you look in their “about” page you will see six mission statements.  The second of which is pertinent here:  Reduce the size and intrusiveness of government.  I don’t really know much about this one except I have learned to read the news they put out.  Usually quite trustworthy.

OK.  Let’s talk about that solution I mentioned.

There are actually enough votes out there to stop the liberal agenda if these groups and their spinoffs can just get together on a one or two issue agenda for the very next election.  Yes I am saying we could take over the senate and put some real conservatives in the house.  We could begin to correct the Obama agenda of destruction.

The key (and hardest part) of that program is getting so many people to agree on which is the right path.  Of course I have some suggestions and some reasoning to back them up.

The very FIRST thing is a voter ID law in the key states at the very least.  Let’s take a look at the state of Nevada as a prime example.  Harry Reid has been elected each time after going into election day behind in the poles by a considerable number of points and that number grows with each election.  He also gets elected each time regardless of those polls.  Makes one wonder how many of the dead in that state come back to life for the election.  Or try California.  Yeah, I know lots of illegals voting but that doesn’t account for Feinstein.  A true mental midget and devout Democratic minion and voter, regardless of her constituency.  Pennsylvania:  Mitt Romney actually got ZERO votes in some precincts!  Now that is just not feasible!  Florida – it would seem that many admitted non citizens took pleasure in voting, some more than once, if we are to believe the news.  Legal actions?  None.  Ohio – a democrat poll worker openly admitted to voting twice for Obama and in fact for the entire democratic ticket.  It even made the news! Action taken?  None.  She wasn’t even removed from the list of poll workers for upcoming election.  The list goes on and on and on.

Enforced voter official ID laws will stop many if not most of these abuses.  The left argues that Voter ID will disenfranchise the elderly and others.  Again this is a gross exaggeration.  The complex I live in is almost entirely senor citizen in population and I know of not one person that didn’t vote because of age or infirmity. Voter ID would not change that.  A certified photo copy of your state ID, already a requirement in almost all states, works just fine for the absentee voter.  So just who would it disenfranchise?  Only those unable to vote legally.  So I guess it might truly disenfranchise a lot of the liberal support.  No wonder they oppose it.

The only other thing we need in the immediate future is a term limit amendment.  One of my earlier posts used the figures of one term for the US Senate.  3 terms for the US House.

Don’t misunderstand me here I like the proposed “28th amendment that is all over the emails for the last few years.  I just believe this one is more, much more, necessary in the immediate future..

The only way I see any of this happening is for the various Tea Party factions to get their act together and present a united front for once.  Perhaps firing a couple of their more unanalytical analysts. I honestly believe that if they and we concentrate and I mean CONCENTRATE our resources on just one big thing like the voter ID in most states, we will have a good chance of reversing some of the damage commencing right after the next congress is sworn in.  Think about it.  Please.

Sometimes lies can come back upon the liar in stunning fashion.  In a shocking new video, James O’Keefe’s Project Veritas demonstrates to the middle-aged Black Attorney General of the United States, Eric Holder and to all of us,  just why he and we should be concerned about lack of voter ID laws – when a  young White man walks into Holder’s voting precinct and shows the world that anyone can obtain Eric Holder’s ballot without any identification at all.

The first video-link above shows a young Caucasian man entering a Washington, DC polling place at 3401 Nebraska Avenue, NW, on primary day, April 3, 2012 in Washington, D.C. giving Holder’s name and address and promptly receiving Holder’s ballot to vote.  He was also told that even if his signature didn’t match it was “no problem.”  Ah, America, land of opportunity for voter fraud.”