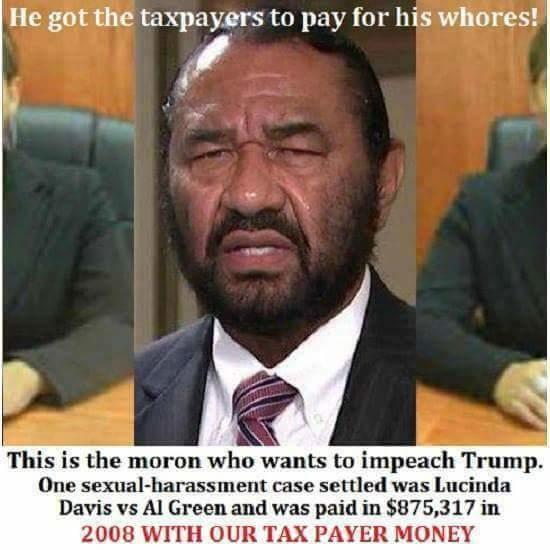 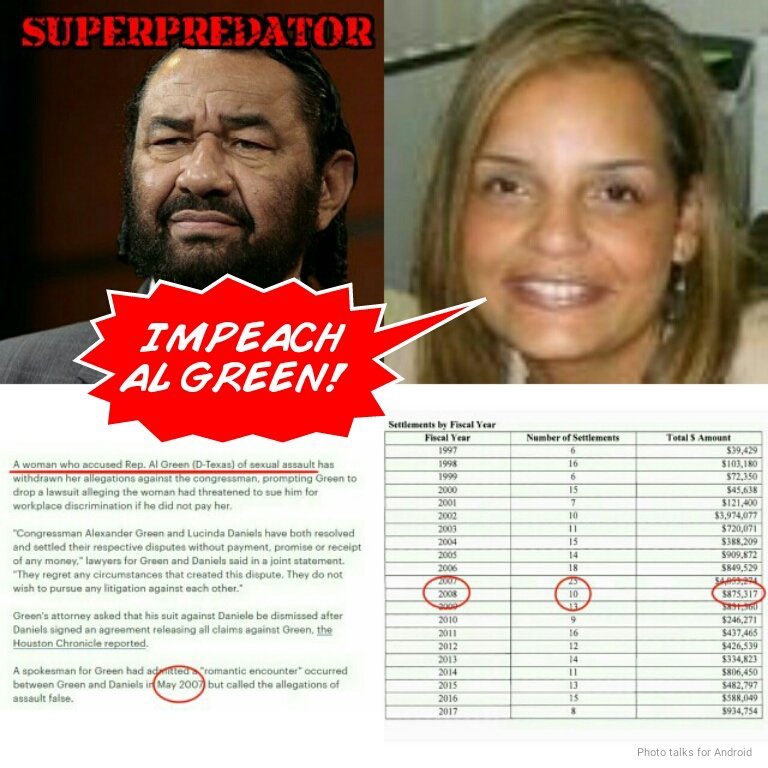 @RepAlGreen’s #SexualAssault victim #LucindaDaniels was paid with $875,317 taxpayers money to silence her. We the people must demand/petition @GOP @TheDemocrats @HouseGOP @HouseDemocrats @SenateGOP @SenateDems to make Al Green pay it back & Expel him from Congress now! 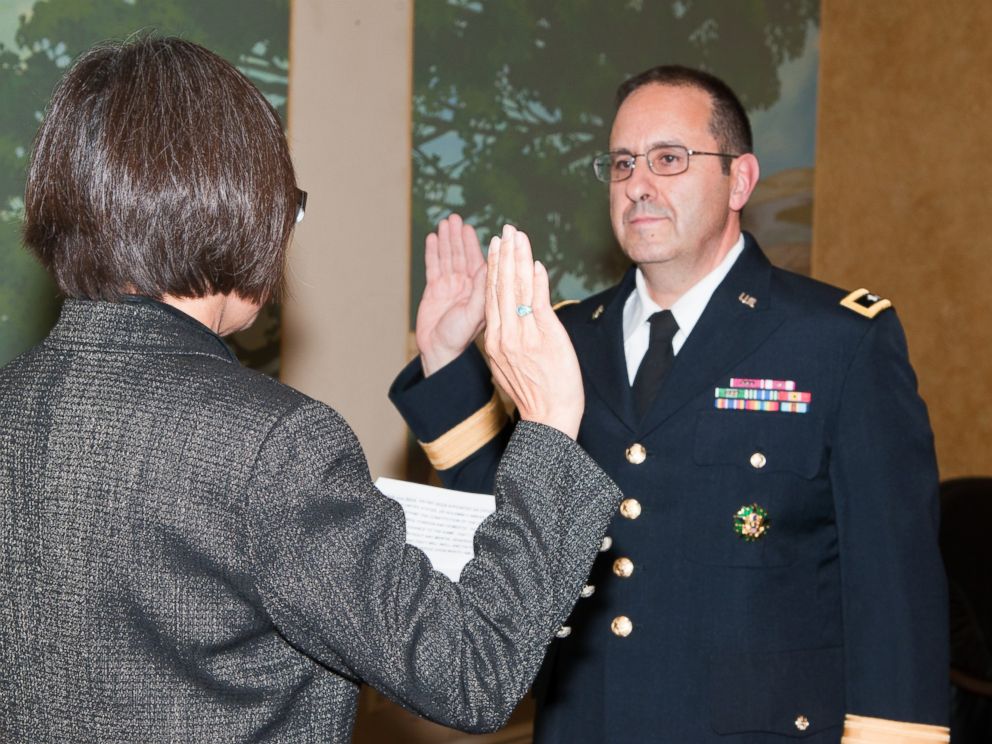 This is Maj. Gen. Harold Greene. He Is Highest Ranking Soldier Killed Since Vietnam. He was killed in Afghanistan by an Afghan soldier.

Do you remember President Obama giving a press conference about his death?

Do you remember him sending Eric Holder over to investigate how he was killed and whether there were any racial tones?

Do you recall him sending representatives to his funeral to show respect?

The answer to all these questions is no. There was no mention of his death, there was no investigation and there was no representative at his funeral.

Shame on this President, using this tragedy as an opportunity to tug at the emotions of people who no longer have confidence in his leadership.

JEFFERSON CITY, Mo. – A bill that would triple Missouri’s waiting period for an abortion has passed the General Assembly and could become law if Democratic Gov. Jay Nixon’s “profound concerns” about the measure don’t lead him to veto it.

“The bill … would require a woman to wait 72 hours after visiting a doctor seeking an abortion to have the procedure. Current law requires a woman to wait 24 hours after the doctor provides information about the abortion procedure, potential risks involved, including the possibility of a loss of ability to become pregnant in the future, and information about alternatives to abortion.”

Missouri would join Utah and South Dakota as the only states with a three-day waiting period for abortions.

“This is going to give people the proper time to actually think about what they’re doing,” said Republican state Rep. Donna Lichtenegger. “I think that life is an important issue, and I don’t think that 72 hours is too long to think about a life.”

It is for progressives, who are characterizing the potential law as more evidence of the GOP’s “war on women.”

“They actually think what is best for a woman who has been raped and impregnated by a relative, is to remain pregnant and wait 72 MORE hours to think about whether or not she wants to terminate,” writes abortion activist Lizz Winstead, according to Care2.com. “No really. This is how they value women. The message is loud and clear.”

Actually, the only thing “loud and clear” is the left’s hypocrisy on this issue.

The pro-life lawmakers are simply using the same logic the gun control lobby uses to push for waiting periods on gun purchases.

One of the main reasons progressives give for supporting delayed firearm purchases is so individuals are forced to undergo a “cooling off” period that guards against impulsive acts of violence, like murder or suicide, according to SmartGunLaws.org.

How is that any different than giving a woman a chance to cool down and think twice about taking the life of her own baby?

But wild-eyed leftists refuse to acknowledge the similarities in the policies. Abortion, to them, is the highest expression of a woman’s freedom and autonomy, and anything that impinges on that freedom is unacceptable.

On a lighter note, if Gov. Nixon does sign the bill 72-hour waiting period into law, the abortion activists can blame their Big Labor pals in the Missouri Senate.

According to financial disclosure reports, President Obama has an estimated net worth of  $7 million dollars.

Since he was worth $1.3 million in 2007, that makes the millionaire  438% more wealthy than when he first ran for office.

As reported by the International Business Times:

President Barack Obama and first lady Michelle Obama listed assets worth between $2 million and $7 million for 2013, of which $1 million to $5 million were in Treasury notes, according to financial disclosure forms released Thursday.

Let me be clear, there is nothing wrong with being a millionaire.  The United States is home to the most millionaires because of the kind of opportunity it offers to hard-working entrepreneurs.

While the average US citizen has a median income of roughly $51,000, Obama rakes in the cash with an annual presidential salary of $400,000. In addition, he receives money from book royalties and other investments.

The activist left said Mitt Romney was too rich to be president, but had no problem supporting John “I’m Wealthier Than Romney” Kerry when he ran for the same post in 2004.

Under President Obama, income inequality has increased dramatically. Asreported here earlier, of the last three presidents, “the income gap didn’t change overall during the Bush years, increased second most during Clinton’s time, and has increased the most with only 5 years under Obama’s belt.”

Why is it that the Democrat Party, Republican Party, the media, homosexual groups like GLAAD, pro-abortion groups, and all other liberals who spout vile things about the TEA Party and Christians never have one word of criticism about Islam?????   A Christian can’t decline to bake a cake without national outrage but homosexuals being hanged for “aberrant sexual behavior” in Moslem nations bring no response.   If I called a homosexual any “defamatory name or term” such as “teabagger” I would immediately be inundated with the harshest of criticism but Moslems glue a man’s private parts closed and fill him with food and water until he is about to explode then hangs this same person and not a word is heard from the left wing homosexual crowd.

The article discusses a topic that is itself, dumbfounding; however comma, the nerve of any politician thinking he/she is better than other American citizens is ludicrous. "We face a higher degree of risk because we’re known and people might not like our opinions,” Springer said.

Uh, dillweed, I am known and am a globally recognized figure because I wore the USMC uniform from 1982 - 2011. Your stupidity puts me more at risk even when I am wearing jeans. All Marine Officers learn to 'lead from the front,' and 'never put your Marines in places you would not go yourself!"

Dillweed, if you want to take away my right of self-protection, why the hell should your rights be better than mine?

Obama has divided our country as no other president in history has done. The signs were there during the campaign, but too many were caught up in his aura. His polarizing finally became obvious with the 'teachable moment' and the police who acted 'stupidly'. In his July 2009 speech (doesn't give press conferences), he undeniably played the race card, which he attempted to cover with the first [of many to come] bogus 'summits'.

Something not true is not a mere competing narrative, but a flat-out lie. http://bit.ly/aGlu9Y

Read more…
We have all heard about the corruption of politics, but not with the force this administration has wielded. We not only heard about it, but witnessed it in a front row seat. The Democrats always overreach, but this time it was in your face, to use one of Obama's favorite idioms. A classic example of things to come was the scene outside a Philadelphia polling place with Black Panther thugs wielding nightsticks intimidating white voters [charges mysteriously dismissed], but most people didn't want to face that little tidbit.TECHNOCRACY: THE DEMOCRATS' TECHNOLOGICAL THUGGERYhttp://tinyurl.com/ygl6648
Read more…