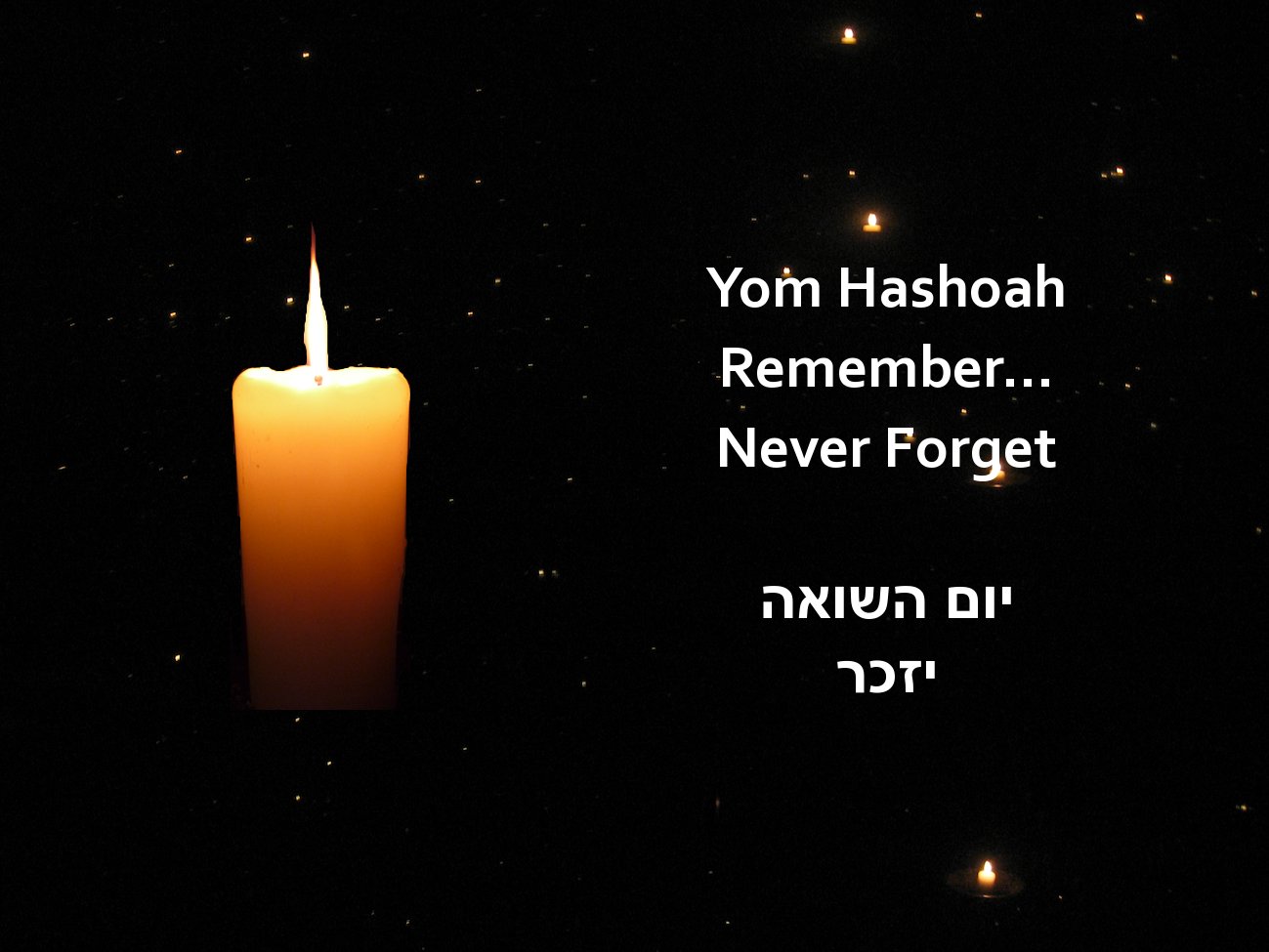 Yom HaZikaron laShoah ve-laG’vurah ( יום הזיכרון לשואה ולגבורה; “Holocaust and Heroism Remembrance Day” ), known colloquially in Israel and abroad as Yom HaShoah ( יום השואה ) and in English as Holocaust Remembrance Day, or Holocaust Day, is observed as Israel’s day of commemoration for the approximately six million Jews who perished in the Holocaust as a result of the actions carried out by Nazi Germany and its accessories, and for the Jewish resistance in that period. In Israel, it is a national memorial day. It was inaugurated in 1953, anchored by a law signed by the Prime Minister of Israel David Ben-Gurion and the President of Israel Yitzhak Ben-Zvi. It is held on the 27th of Nisan (April/May), unless the 27th would be adjacent to Shabbat, in which case the date is shifted by a day. Yom HaShoah Ye Holy LAND of ISRAEL – We Will Always REMEMBER and NEVER FORGET YOU!! Shalom Ye ISRAEL and ISRAELI-AMERICANS!!

Recently I stumbled upon THE scariest blog of the decade.

And I posted this reply

Reading both might take a few seconds, but WORTH IT!

WHY all this armor for DHS?

Do we have enough “dedicated- to- America” Military to prevent an Obama holocaust?

We ask ourselves who has caused the protracted holocaust in the world. Could it be that for evil to win only one thing is necessary - good people who do nothing? Or that the hottest places in hell are reserved for those who, at the time of moral crisis, retain their neutrality?

True, there are people in our world who have lost their moral perspective. Human knowledge has become vast and unmanageable. Astronomy has revealed a world beyond the imagination of man, physics a universe in the atom, biology a microcosm in every cell, physiology mysteries in every organ, and psychology dark secrets in every dream. Theology has crumb-led, technology has exploded, economics has shattered, and politics has inflamed the world. The scientific specialist knows more and more about less and less, the philosophic generalist knows less and less about more and more, and both have put their blinders on to shut out any moral decision. The door is opened wide for a lasting holocaust.

Knowledge has to be man's prime instrument for action and survival.

Introductions that enumerate the institutions of learning where I have earned my degrees amuse me. They miss the most important school and the most influential teachers I have ever had - my home and my parents. They were simple, hard-working people who had little time and very few luxuries to give. They did give me, however, their personal example and a firm spring-board from which to jump into the world of confusion, terror, and war which followed. They professed one simple basic belief: Something is either good or bad, it is either decent or indecent, it serves either God or the devil, and most important they believed that it was my duty to find out what is right and what is wrong. This was what their education was all about.

When we fail to make decisions, someone else will make them for us. In times of intimidation, revolution, and war this "someone" is more apt to be the mobs in the streets who care little for facts or concepts. The result is tyranny.

If freedom and democracy are to survive, it will take a miracle - a miracle that only dedication and commitment can bring about. After the technological and intellectual revolutions, a moral revolution is necessary.

When trapped in a world of indolence, incompetence and impotence, when challenged by ambivalence, arrogance and aggression, when you feel insignificant, you can and must do your duty!

You know the needs of your family, your neighbor, your town, your state and your community. You have here a duty to perform.

There is no time to waste. The revolutionary forces shaking the earth have converged upon us, presenting us with difficult choices - with a need for action, for ideas, for concerted and sustained commitment as a nation and as individuals.

We must meet the challenge with the conviction of our beliefs. We must remember that as Americans - by birth or by choice - we are heirs to a permanent, continuing, liberating revolution. Our great ancestors left us an unparalleled moral and political weapon that we must share with the suffering peoples of the world.

In April '945, the Second World War was coming to an end. In Central Europe great numbers of people were still dying. In our village fifty hostages had been taken by Nazi soldiers. I was among them. Orders had been given for ten of us to be executed each time one of their retreating soldiers was killed by our guerrillas. Being first in the alphabet, I found myself in a courtyard facing two soldiers armed with machine guns, not knowing if I had one minute, ten seconds, five seconds to live.

Almost unknowingly, I began to pray, a prayer of thanksgiving to God, that if I had not lived for a noble cause He was now giving me the opportunity at least to die for a noble cause - to die in resistance to the tyranny and misery represented in those two Nazi soldiers. Happiness momentarily filled my being - finally my life made some sense.

Without any advance warning, the guards were ordered to take me back to jail. Eventually we were released. From that moment on I have believed in miracles.

Only those who are willing to die for a noble cause are fit to live.

I believe there is a great difference between Americans and the people of other countries. Whenever I travel I recognize this difference. These people have a dream, a sense that there exists a powerful force capable of leading the world to justice and peace. They are aware that there is a unique society in the world where God has put together all nationalities, races, and interests of the globe for one purpose - to show the rest of the world how to live. The dream around the world, in spite of all contrary propaganda, is America.

I ask you, where is your America?