It’s everything you’d expect from All In With Chris Hayes, and so much less … less common sense, less intellectually honest, and less respectful of faith. Renowned Jesuit author Fr. Jam 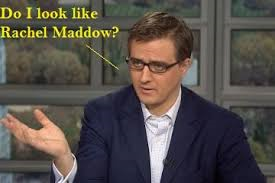 es Martin looks at times like he’d accidentally wandered into a lunatic asylum during this segment, and after watching five minutes of Chris Hayes and Harvard’s Christopher Robichaud treat the now-cancelled “black mass” event like an actual religious practice rather than a hate-speech mockery of the Catholic Mass, Fr. Martin will not be alone in that confusion:

Martin offers a very close analogy when he suggests that Harvard wouldn’t have tolerated the burning of a Koran, even if wrapped in pseudo-religious practice. Muslims see that as a desecration of their religion, just as Catholics see the “black mass” — and given the nearly step-by-step mockery of Catholic liturgy in the latter, Catholics have a much better case to make. The entire point of this “service” is hatred towards Catholics in particular. Instead of addressing this point, though, both Hayes and Robichaud accuse Martin of spouting “false equivalencies” and start moaning over the power of “major religions” to keep the “marginalized” out of the debate.

Father Martin is not some finger-wagging, down-shouter of a shepherd (all-pulpit-no-pasture and forever on the harangue), and because that is true, and because his easygoing manner is well-known, you would think that his sobriety, here — his stark refusal to budge on the subject of Satanism, and the offensiveness inherent to any Black Mass being “re-enacted” in the public — would make an unusually strong impression on the host, Chris Hayes, and other guest.

You might think it, but sadly, you’d be wrong. No one in this video clip is thinking, “gee, Martin is no lunatic, and his gravity is palpable, so maybe there’s more to this than I know…” Rather, Hayes seems incapable of fully masking his amused condescension toward Martin’s concerns, and is willfully choosing not to hear his words; the two men prefer to travel campus-comfortable tracks, ranging from the predictable to the bigoted to the silly, with a side-trip to pick up a straw man. …

Notice, Martin addresses the “Black Mass” situation on Harvard Extension’s own terms. That body characterized the insult as a “cultural” event and compared it to a re-enactment of a Shinto Tea Ceremony; Father Martin suggests that a similar “re-enactment” of an anti-semitic or racial horror, like a lynching or a cross-burning, would quite rightly be a denounced as having no place on any campus or indeed in any public place. Why, then, would the mockery of the Catholic Mass be an acceptable insensitivity?

The answer does not come. Instead Hayes and Harvard’s Christopher Robichaud tries to rebut with overarching smugness. Unable to admit “rem acu tetigisti”, Robichaud suggests that Martin is intellectually “sloppy” and risks credibility by rejecting the priest’s very accurate question as a “false equivalency”; his argument essentially boils down to this: “marginalized communities” deserve sensitivity protections and respect, but “big powerful religions” do not. I wonder if he’d be fine, then, with a public burning of the Koran, since Islam, claiming a billion members, is a “big powerful religion.”

He and Harvard would most certainly not be fine with that. They would chalk that up as oppression of a marginalized community too, although the true motives would almost certainly be a little more in line with their survival instincts.

The chief absurdity, though, comes from the religious-liberty equivalency argument Hayes and Robichaud make in regard to the Satanists and the “Pastafarians,” a juvenile and tiresome satirical group of atheists mocking religious practice in general. The event was not staged as a religious event but a cultural event, and in any case the controversy wasn’t about the rights of Satanists to do what they do on their own property. It was about Harvard’s decision to host and sponsor the event, directly and indirectly, while claiming to be opposed to hate speech, marginalization, etc etc etc. Religious freedom wasn’t the issue at all, but that was the dodge Hayes and Robichaud used.