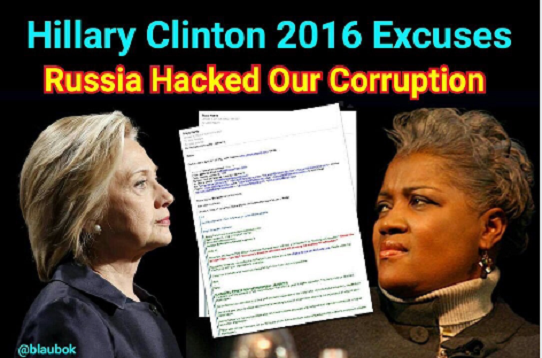 And don’t forget Uranium One, Fusion GPS, keeping classified emails on an iunsecured private server, deleting 33,000 emails under subpoena, and, well, you get the idea. Unfortunately our AWOL AG Jeff Sessions, whose face was last seen on the side of a milk carton, does not. So we are left with the absurdity of a spcial prosecutor looking into Trump-Russia collusion where there is none while overlooking the multiple Clinton elephants in the room.

The revelation that both the DNC and the Hillary Clinton campaign were funneling money through a law firm to Fusion GPS to produce a slimy and fake dossier on Trump culled from foreign sources was bad enough. Now we find, courtesy of the one truthful and remorseful Democrat on this planet, former DNC Chairperson Donna Brazile, that the DNC was bought and paid for by Hillary Clinton, who probably violated multiple FEC campaign laws in rigging the primaries against Bernie Sanders and shifted cash around in a manner that could only be called, what’s the word Robert Mueller would use, money-laundering:

In an excerpt from her upcoming book, Brazile says she discovered a document that explained why the Clinton campaign had such a stranglehold on the DNC. It was published in Politico Thursday.

“When I got back from a vacation in Martha’s Vineyard,” she wrote, “I at last found the document that described it all: the Joint Fund-Raising Agreement between the DNC, the Hillary Victory Fund, and Hillary for America.”

The agreement—signed by Amy Dacey, the former CEO of the DNC, and Robby Mook with a copy to Marc Elias — specified that in exchange for raising money and investing in the DNC, Hillary would control the party’s finances, strategy, and all the money raised. Her campaign had the right of refusal of who would be the party communications director, and it would make final decisions on all the other staff. The DNC also was required to consult with the campaign about all other staffing, budgeting, data, analytics, and mailings.

Hillary Clinton staged a political coup worthy of a banana republic. Brazile has confirmed what the Sanders campaign claimed as early as May of 2016, charges that Hillary Clinton was engaging in money-laundering to help her campaign:

Despite Clinton’s pledges to rebuild state parties, Politico found that less than 1 percent of the $61 million raised by the Victory Fund has stayed in the state parties’ coffers.

“Secretary Clinton is looting funds meant for the state parties to skirt fundraising limits on her presidential campaign,” Weaver said. “We think the Clinton campaign should let the state parties keep their fair share of the cash.”

Sanders’ and Clinton’s primary campaigns both raised about $26 million in April, but Politico documented how the Hillary Victory Fund, a supposedly joint fundraising committee, has been exploited to inflate her presidential primary campaign.

“Secretary Clinton has exploited the rules in ways that let her high-dollar donors like Alice Walton of Wal-Mart fame and the actor George Clooney and his super-rich Hollywood friends skirt legal limits on campaign ontributions,” Weaver added. “If Secretary Clinton can’t raise the funds needed to run in a competitive primary without resorting to laundering, how will she compete against Donald Trump in a general election?”

Turns out that even with money-laundering, Hillary couldn’t win. On a receny edition of Fox News Sunday. House Oversight Committee Chairman Trey Gowdy, R-SC, notes that in addition to laundering her campaign cash through her wholly-owned subsidiary, the DNC, Hillary Clinton used a law firm to funnel cash to Russia-linked Fusion GPS:

Gowdy said, “I’m not an election law expert, but the good news is you don’t have to be too understated the absurdity believing you can just launder all of your campaign money by just hiring a law firm. Imagine if you and I were running for Congress, and we just hired a law firm and said ‘Hey, you go to all the opposition, you go buy all the television, you go buy all the bumper stickers, you go higher all the experts, and we will launder all of this through a law firm. I can’t think of anything that defeats the purpose of transparency laws more than that.”

He continued, “I am interested in that, and I am also interested in sharing some memory tricks with folks at the DNC because no one can remember who paid 10 million dollars to a law firm to do oppo research. I find that stunning. $10 million and no one can remember who authorized it, who approved it. So you’ve got two issues, a memory issue and then the lack of transparency by laundering money through a law firm.”

And did we forget the Clinton Foundation? As Fox News legal analyst Greg Jarrett notes, it was used in an influence peddling scheme to enrich the Clintons and advance their political ambitions, colluding with the Russians to, among other things, sell 20 percent of our uranium supplies to interests and donors aligned with Moscow:

It is against the law for the Clinton campaign and the Democratic National Committee to funnel millions of dollars to a British spy and to Russian sources in order to obtain the infamous and discredited Trump “dossier.”  The Federal Election Campaign Act (52 USC 30101) prohibits foreign nationals and governments from giving or receiving money in U.S. campaigns.  It also prohibits the filing of false or misleading campaign reports to hide the true purpose of the money (52 USC 30121).  This is what Clinton and the DNC appear to have done.

Most often the penalty for violating this law is a fine, but in egregious cases, like this one, criminal prosecutions have been sought and convictions obtained.  In this sense, it could be said that Hillary Clinton is the one who was conspiring with the Russians by breaking campaign finance laws with impunity.

But that’s not all.  Damning new evidence appears to show that Clinton used her office as Secretary of State to confer benefits to Russia in exchange for millions of dollars in donations to her foundation and cash to her husband.  Secret recordings, intercepted emails, financial records, and eyewitness accounts allegedly show that Russian nuclear officials enriched the Clintons at the very time Hillary presided over a governing body which unanimously approved the sale of one-fifth of America’s uranium supply to Russia.

Hillary Clinton was the godfather, or is it godmother, that ran multiple criminal enterprises. The existence of a special prosecutor investigating Trump-Russia collusion is based on a fake dossier she controlled the financing of. Paul Manafort and his co-defendants could make the “fruit of a poison tree” argument, that since the dossier that sparked the investigation into collusion and resulting indictments was politically motivated and financed, and its unverified contents may have been used by the FBI to obtain FISA warrants, anything that resulted from it should be summarily dismissed.

As for the aforementioned Marc Elias, his involvement in Hillary’s crimes is just one facet of his involvement with the crimes of Hilary and the Democrats. Remember he sat between former DNC Chair and Congresswoman Debbie Wasserman Schultz and John Podesta as they invoked the Sergeant Schultz (no relation) defense regarding Fusion GPS

Did DNC and Team Hillary attorney Marc Elias lead John Podesta and Debbie Wasserman Schultz into a perjury trap? According to CNN, the two testified to congressional investigators that they did not have any knowledge of the funding for the Fusion GPS dossier that prompted an FBI probe into Donald Trump campaign figures.

In recent closed-door interviews with the Senate intelligence committee, Podesta and Wasserman Schultz said they did not know who had funded Fusion GPS, the intelligence firm that hired British Intelligence Officer Christopher Steele to compile the dossier on Trump, the sources said.

Podesta was asked in his September interview whether the Clinton campaign had a contractual agreement with Fusion GPS, and he said he was not aware of one, according to one of the sources.

Sitting next to Podesta during the interview: his attorney Marc Elias, who worked for the law firm that hired Fusion GPS to continue research on Trump on behalf of the Clinton campaign and DNC, multiple sources said. Elias was only there in his capacity as Podesta’s attorney and not as a witness.

Whether or not this testimony was under oath, it is a crime to provide false testimony to Congress.

Indeed it is. Add it to the list of crimes that go uninvestigated and unprosecuted as AG Jeff Sessions contemplates his navel. A special prosecutor needs to be appointed and a grand jury empanelled to investigate this list of crimes that would make a mafia don proud. Justice should be blind and not brain-dead. Unless there is a double standard at play here, there is no equal justice under the law and Hillary Clinton was right when she said laws are for the little people.