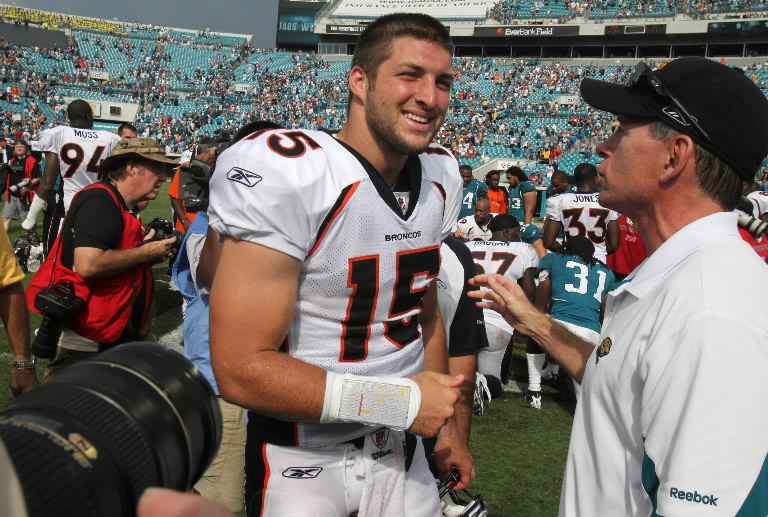 I recently learned President Ronald Reagan designated 1983 as the national Year of the Bible. I seriously doubt such a proclamation would pass Congress today.

President Obama has declared, “We do not consider ourselves a Christian nation”. https://www.youtube.com/watch?v=QIVd7YT0oWA

For those of you who do not follow football, former college football quarterback superstar, Tim Tebow is an outspoken Christian. The liberal media and pro abortion groups were furious when the story of how Tebow's pro-life mom was advised by doctors to abort him, but refused, was featured in a Super Bowl commercial. https://www.youtube.com/watch?v=qLds7Xcs0-w

Tebow is now a pro football rookie quarterback with the Denver Broncos. Some sports analysts and media say Tebow does not have the skills needed to “make it” in the NFL. While some of the naysayers and criticism may be justified, some desire to see Tebow fail because he is so outspoken regarding his Christian faith.

My doc says exercise helps control my diabetes. That Sunday, I was at the gym on the ellipse machine watching the Denver/Miami NFL football game. It was Tebow's first start as a pro.

An elderly husband and wife couple approached the aerobic section. They visually scanned the bank of TV sets. I suspected they were looking for the Tebow game. I was correct.

I asked, “Are you folks Tebow fans?” They smiled and replied, “Yes” I said, “So am I”. The woman said, “Thank you”. Something in her voice told me their support of Tebow extended beyond football. I suspect millions across America share similar feelings about Tebow.

Rather than giving you a play by play of the game, let's say for 95% of the game, Tebow's performance was unimpressive. Miami was beating Denver 15 to zero. Then, with 2 minutes left in the game, Tebow brought his team back to tie the score. Tebow's team won the game in overtime. Wow!

When interviewed after the game about his amazing comeback and win, Tebow said the last thing I am sure the liberal media wanted to hear, “First, I would like to thank my Lord and Savior Jesus Christ...”

Folks, I yelled, “Yes!” and felt a little tearful.

Please do not get me wrong. I am not suggesting Tim Tebow walks on water. I am saying that in our culture which celebrates crudeness and the lowest common denominator, it is extremely refreshing to see this young man boldly standing up for traditional wholesome principles and values.

Unquestionably, the American left has launched a war against Christianity. We are lectured and threatened with political correctness to respect every religion under the sun except Christianity.

It is open season on trashing Christians in movies, political interviews and etc. The Christian is portrayed as the nut job, the loser or the nerd.

Rumor has it, Tebow is an extremely hard worker and a born leader; sounds similar to a fire ball from Wasilla Alaska who is also despised in the liberal media for similar reasons.

Be prepared for an all out campaign by the left, throughout his pro football career, to destroy and discredit Tim Tebow.

Thus far, Tebow has done three things to infuriate the left and secure his name permanent residency on their excrement list. First, Tebow dodged being aborted and went public with his story. Second, Tebow won his first game in the NFL and publicly thanked Jesus for it. Dem there is fightin' words to the left! Third, without being intentionally political, Tebow's life promotes Conservatism.

Culturally, we have fallen a long way from President Reagan declaring a national Year of the Bible. Such a proclamation would be impossible today. Tebow publicly thanking Jesus in a secular setting is deemed fanatical by liberal media standards in America today.

And why is the left so angry and threatened by Tebow's mom's decision not to kill him?

Congratulations Tim Tebow on your super NFL debut. Millions are praying for you. And thanks for scoring one for us Christians.

Gubenatorial candidate and Denver Mayor John Hickenlooper’s 23- year association with the ultra-radical Chinook Fund has given ammunition to his Republican opponent Dan Maes as one questionable decision after another has been exposed. Hickenlooper was one of the founders of the Chinook Fund in 1987 and he’s given tens of thousands of dollars to the fund over the years. He refuses to say if he’s still connected with Chinook at present.

Chinook has donated more than $2 million in just the past 20 years to various Colorado non-profit agencies. Some of the recipients work with the homeless and mentally ill, others seem too radical to believe. For some examples . . . .

Colorado ACORN is part of the greater national organization that has undermined the nation’s financial stability by shaking down home lenders to force unwise loans to people lacking ID; lacking jobs; lacking income other than foodstamps; lacking reasonable credit ratings; lacking even rental history; welfare recipients; and other unworthy borrowers including illegal aliens. ACORN both in Colorado and across the nation has been infamous for massive involvement in voter fraud.

Transform Columbus Day Alliance a group supporting the Colorado American Indian Movement (AIM) is mired firmly in the past, seeking to “transform the ‘racist’ celebration” of the life of Christopher Columbus.

Somos America is a group mainly campaigning for the “rights” of illegal Hispanic immigrants in Colorado and has called upon Latinos and other Coloradoans to boycott Budweiser Beer because the brewery’s distributor Hensley Beverages Co. contributed to state lawmakers who voted for the Arizona Illegal Immigration Law.

HARM Reduction Action Center is a group which enables drug users in Denver rather than seeking to help them stay clean.

Recreate ‘68 is a very radical organization which besides war protests, harrassed, intimidated and annoyed Delegates to the 2008 Democratic National Convention held in Denver during August, 2008. Their name was taken from the massive and ugly student-led riots and police counter-actions in Chicago in 1968 both inside and especially outside the Democratic Conventions. Aligned with the Colorado ACLU, Recreate ‘68 spent most of its time complaining about the heavy Denver police presence which they said “deprived our protesters of their 1st Amendment rights to freedom of speech and freedom of expression.” Since Hickenlooper was ostensibly doing everything possible to ensure a smooth-running DNC in the city he serves as mayor, his charity’s long-standing association with radical groups such as those mentioned and especially with Recreate ’68 seems a product of questionable judgment at best. Hickenlooper refused to disavow Chinook, Recreate ’68 or any of the other groups that Chinook subsidizes.

The mayor has found himself dogged by many improprieties and annoying revelations of late . . . apparent preferential treatment his restaurant received in cases involving liquor violations and frequent hiring of illegal alien workers have not gone down well with the voters. But the two most high-profile situations are the loss of 31,000 jobs in Denver as Hickenlooper oversaw tax hikes and made Denver a “sanctuary city” bringing thousands of illegal aliens to town to exploit Denver city services. The Chinook, and particularly the Recreate ’68, donations raise deep questions of judment. How does a politician promise to execute a flawless national convention while donating money to people who’s stated interest is to disrupt and villify the convention and the conventioneers? But Hickenlooper’s connection to the utterly corrupt ACORN organization bent upon Cloward-Piven tactics and strategies to undermine the nation’s economy and advance marxist goals shows the man’s real character.