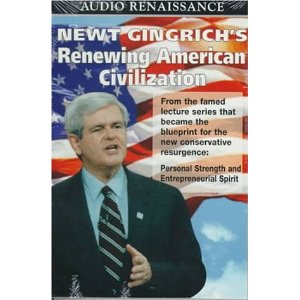 The Republicans sat around for years peacefully enjoying the bonuses and perks from taxpayers. They were totally disengaged refusing to perform their God given duties to maintain a Government of the people, by the people and for the people. They had formed an Elite Club and were most protective of the status quo. They really didn’t aspire to be a majority in the House – why ruffle any feathers when their cushy jobs gave them special perks, bonuses and lots of time to dwell on their social life.

In fact politics was the Republicans’ hobby and they weren’t inspired to make it a real job and become a public servant. But, Newt Gingrich came along and their lives were changed forever, although many resented Newt he was able to reach across the aisle and join hands with President Clinton. Clinton and Gingrich weren’t bosom buddies, absolutely not - but they both agreed that our Nation was stumbling and in need of major repairs.

Newt was aggressive, demanding and on a mission that the Republican establishment didn’t wish to participate in, now that they were a House majority after 40 years some of the younger studs decided they’ve remove this “super star” so they could re-establish their Elite Club and live happily ever after.
Newt definitely was one of Clinton’s best resources and when it came to foreign policy Newt was definitely an ally of the White House.

This was one time in our Nations’ history that that Republicans and Democrats reached across the aisle and our Nation became strong. The budget was balanced with a surplus of approximately a quarter of a trillion dollars. 2012 our Nation is Over 15 trillion in debt, it’s hard to envision a surplus, but it can be a dream come true in the next few years.

Newt Gingrich and President Bill Clinton accomplished more in a short time than any two men in our Nation’s history. Due to the bills passed unemployment went to 4%, millions of Americans were working again. The two corrected many of the core problems that our Country is facing now.
Together they addressed and implemented regulations on financial institutions, income equality working together on poverty – in short they brought a struggling Country back to a Nation with a robust economy, a balanced budget and both Republicans and Democrats concentrated on those who were in the poverty bracket.

But, as so often seen when one person jumps to stardom literally overnight, there were those who would rather “fight than switch.” So overnight a few renegades decided to bring the star back to reality; they felt they’d lost their identity and were determined to remove Gingrich as Speaker of the House.

So Congressman Tom Delay the exterminator and majority whip devised a scheme to remove Gingrich from office. Tom surrounded himself with Republicans that he thought he could trust to undertake this mission. Tom Delay along with majority leader Dick Armey, G.O.P. conference chairman John Boehner and leadership chairman Bill Paxon--not to mention 20 or more insurgents from the rank and file started to make their move only to find they hadn’t dotted their “I’s” or crossed their “T’s.” Gingrich actually was empowered by the failed coup, but he was already making plans to step down as Speaker of the House and make a run for President of the USA.

It is possible America to put America back to work, just think we have a pipeline that would put thousands of Americans back to work. We have some of the greatest sources of energy in the whole World – we just need to tap into our God given resources. Although Republicans and Democrats have kicked our American Dream under the bus – we can still retrieve it and bring it back to America.

It is possible for Republicans and Democrats to reach across the aisle working together to restore our struggling Nation. President Bill Clinton and Newt Gingrich are the proof of the pudding – nothing more needs to be said at this time except put Newt Gingrich in our White House as President of the United States of America in 2012.