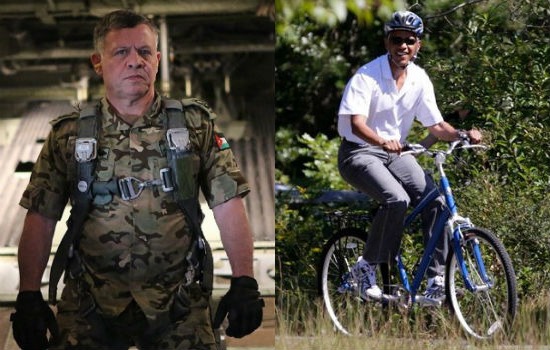 King Abdulla of Jordan has always been a friend and supporter of the United States. He has shown by ordering a direct and instant response to the savage and horrible torture murder by fire of his young fighter pilot that he King Abdulla, is a man of courage and honor! There are suggestions that King Abdulla has led some of these raids himself as he is a skilled fighter pilot. He is indeed a hero!

Here is a real man and compassionet and honest leader. He obviously cares deeply abour all his people. Enough to put his life on the line to avenge one of his young flyers! Can we ever hope to have a man like this in the White House again? Can we ever call the coward Obama a hero about anything?

The communist tyrant Obama could take lessons from King Abdulla! Like honesty, integrity, bravery, and being a patriot! Our mock commander of sheep cannot event utter one word of patriotism or truth. Obama is truly a piece of low life shit! It is about time someone said this in the media and in Washington. Obama is a discrace to America and his policies are an abomanatin to God

Now, the whole world is watching Obama. The cat is out of the bag to all the world about the fraudulent and egocentric human being he really is. The scandal's and outrageous incidents both national and international are multiplying weekly. How  can this corrupt, cowardly and perverted administration survive much longer. The whole world is laughing at us. The whole world now disrespects us....The truth will set us free!

The state of our great country has brought back some fond memories from my past and new insights into the present.
We had a partying womanizing liar as Commander in Chief caught in an adulterous affair with one Monica Lewdinsky. To take the American peoples mind off his impeachment “Slick Willie” started a WAR against Christians on the other side of the pond.
Luckily, now, we have a radical left wing anti American doing the same type stuff. In an effort to hide the attacks and deaths of Americans in Lybia, inaction by another Clinton aiding in this fiasco, Obummer has caused a FAKE Fiscal Fiasco, and trying to cause as much harm and Fear in These Great United States as possible by disgracing and disrespecting Real Americans that either Served this country or love it very much.
By trying to force socialism on us all, this community organizer and Coward (having never served  this country in any real fashion) is trying to break our (real Americans) hearts, minds, souls spirits, and Banks, all to cover up his failure as a leader in any sense of the meaning.
Whatever did happen in Benghazi and when will this madness ever end?
Impeach and Defund now. You Guys Know what I mean, I’m sure.
May God Have Mercy on us all.