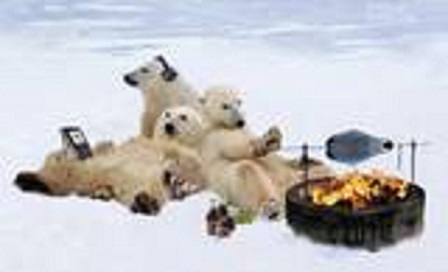 If the Associated Press report is accurate, President Trump is going to pull the United States out of the Paris Climate Accords, an economic albatross based on junk science the rest of the world wants to hang around the neck of the United States. It could happen as soon as the day after tomorrow. As the AP reported:

President Donald Trump is expected to pull the United States from a landmark global climate agreement, a White House official said Wednesday, though there could be "caveats in the language" announcing a withdrawal, leaving open the possibility that his decision isn't final….

Trump tweeted on Wednesday morning: "I will be announcing my decision on the Paris Accord over the next few days. MAKE AMERICA GREAT AGAIN!"

Well, the only way to make America great again is to renounce the Paris Climate Accords as the scripture of a false climate change religion. The Accords would doom Trump’s plans to resurrect American energy production and liberate fossil fuels from the chains of regulation. It would make no sense to agree to the Accords after ending the war on coal and relieving industry, particularly the energy industry, from oppressive and job-killing regulations.

Yes, the earth has been warming. It has been warming ever since the Little Ice Age. That is a good thing, Crops love CO2 and longer growing seasons – good news for a hungry world. The fact is that global temperatures have essentially flat lined in the past two decades.

Recently published data from independent meteorologists Dr Ryan Maue of WeatherBELL Analytics and Dr Roy Spencer show that global temperatures have fallen back to about the levels of 20 years ago despite our alleged gushing of CO2….

The explanation of the temperature pause since 1998 – which contradicts the computer models used by the Intergovernmental Panel on Climate Change (IPCC) – has been the subject of widespread discussion in academic journals, including the American Geophysical Union journal, Geophysical Research Letters, as well as Climate Dynamics, and the Scientific Report of the Chinese Academy of Sciences. All agree that temperature rises have stalled, but there is no consensus on the cause.

Dr Roy Spencer publishes every month the average global temperature derived from satellite observations. Since 1979, satellites have been sending back to earth data on the temperature of the lower atmosphere, and this data is published by the University of Alabama, Huntsville (UAH) and on Dr Spencer’s website.

William Happer, Cyrus Fogg Brocket Professor of Physics, Emeritus, at Princeton University, writes in the Washington Times that CO2, which every human being exhales, is a blessing and not a curse:

Climate has been changing since the Earth was formed — some 4.5 billion years ago — according to geological evidence. Climate changes on every time scale — decades, centuries, millennia and even longer periods.

The climate of Greenland really was warm enough for farming around the year 1100, and the Little Ice Age really did drive Norse settlers out of Greenland by the year 1500. Like these changes, the very minor warming we have had over the past few centuries is mostly from non-human causes.

Each human exhales about two pounds of CO2 a day from simply being alive. Living creatures, humans, animals and plants are largely made of carbon. Carbon dioxide is essential to the growth of plants. By the standards of geological history, plants have been coping with a CO2 famine for several tens of millions of years. Satellites already show dramatic greening of the Earth as CO2 levels begin recovery toward their historical norms. These were measured in thousands of parts per million (ppm), not today’s puny 400 ppm.

Ironically, the American energy industry through innovate technology has done more to reduce emissions of so-called “greenhouse gases” than any parchment agreement could ever have. It is fracking that has produced a boom in the production of natural gas, a fossil fuel, that has produced a significant reduction in the U.S. of those so-called “greenhouse gases”. As the Washington Times reported:

“For those of you who are not breathlessly following the most recent data that has come out, I would note recent data that we’ve seen suggests or finds that for the first half of 2016, energy sector emissions in the United States are actually down 6 percent from last year, and 15 percent from 2005,” said Mr. Deese. “And they’re at their lowest level in nearly 20 years.”

He said nothing about the U.S. natural gas boom, an omission that critics say has become par for the course as the Obama administration highlights renewable energy and emissions restrictions without acknowledging the role of fracking in natural gas extraction.

“To add dishonesty to injury, his administration is bragging about the reduced CO2 emissions of [the] U.S. industry without crediting the fracking for natural gas, a fossil fuel, that largely caused it,” said Alex Epstein, author of the book “The Moral Case for Fossil Fuels.”

There us no moral case to mage for the recipe for global povery that the Paris Accords represent. As Sen. Ted Cruz notes at CNN Opinion, the Paris Accords is akin to trying to repeal the Industrial Revolution. It would be a lot of economic pain for little or no temperature gain:

Following a successful international tour and the G-7 Summit in Italy, President Trump has an opportunity to relieve our nation of the unfair and economically devastating requirements of the Paris Agreement, the United Nations climate treaty he pledged to rip up during the campaign….

According to a recent National Economic Research Associates Economic Consulting study, the Paris Agreement could obliterate $3 trillion of GDP, 6.5 million industrial sector jobs and $7,000 in per capita household income from the American economy by 2040. Meeting the 2025 emissions reduction target alone could subtract $250 billion from our GDP and eliminate 2.7 million jobs. The cement, iron and steel, and petroleum refining industries could see their production cut by 21% 19%, and 11% respectively….

In return for crippling our economy, the Paris Agreement would do next to nothing to impact global temperatures. Under the EPA's own models, if all carbon emissions in America were basically eliminated, global temperatures would only decrease by less than two-tenths of a degree Celsius.
While the agreement would have a negligible impact on temperatures, America would be putting itself at a competitive disadvantage. That's because while the Obama administration irresponsibly committed America to immediate, real cuts in emissions, our global economic competitors would have no such handicap. In fact, Russia is permitted to increase its emissions approximately 50% and China and India have no meaningful cap on emissions until 2030.
President Trump has made a crusade against unfair trade deals. This climate deal is an economic disaster which has more to do with the global elites gain control over the world’s economy. They want to control and regulate the means of production and dictate every minute aspect of our daily lives – just as President Obama sought to do. Hey, isn’t that the classic definition of Marxism?.

Global warming hype is nothing more an attempt by climate change scammers to impose what has become a religion. MIT Professor Richard Lindzen is quoted in the Daily Caller questioning  the tenets of this new religion:

Throughout history, governments have twisted science to suit a political agenda. Global warming is no different, according to Dr. Richard Lindzen of the Massachusetts Institute of Technology.

“Global climate alarmism has been costly to society, and it has the potential to be vastly more costly. It has also been damaging to science, as scientists adjust both data and even theory to accommodate politically correct positions,” writes Lindzen in the fall 2013 issue of the Journal of American Physicians and Surgeons….

Lindzen compares global warming to past politicized scientific movements: the eugenics movement in the early 20th Century and Lysenkoism in the Soviet Union under Stalin. However, the MIT professor argues that global warming goes even beyond what these past movements in terms of twisting science.

“Global Warming has become a religion,” writes Lindzen. “A surprisingly large number of people seem to have concluded that all that gives meaning to their lives is the belief that they are saving the planet by paying attention to their carbon footprint.”

The goal is to use climate change as a means to increase government power over every aspect of our lives, what we make, how we make it, what energy we use, what cars we drive, even what food we eat. The scientific record, as Investor’s Business Daily notes, shows that climate change is a scam:

…a paper published recently in the journal Global Environmental Change found that carbon dioxide emissions are essentially self-regulating and that after countries reach a higher GDP level, CO2 emissions either stabilize or even decline, without the need for carbon taxes or carbon capture technology.

Here in the U.S., the fracking revolution has released from our vast shale formations vast natural-gas deposits that have done more to reduce carbon emissions than any IPCC report.

A study published late last year by the Energy Information Administration reported that the "carbon intensity" of the electricity produced in the U.S. actually fell by 13% from 2007 to 2012.

British climate-change skeptic Lord Christopher Monckton recently pointed out at Marc Morano's Climate Depot that the "Great Pause" in global temperatures — now at 18 years and counting — has occurred even as carbon dioxide concentrations have risen.

This 18-year period constitutes roughly half the satellite observation period that began in 1979.

Physicist Gordon Fulks of the Cascade Policy Institute notes that the warming pause since 1997 has occurred while atmospheric CO2 concentrations have increased 25%.

Carbon dioxide is not a pollutant but the source of all plant and animal life. Even if emissions were a threat, and they are not, it's prosperity and the technology that comes with it, such as fracking, that reduce overall emissions in the atmosphere.

And now the high priests of the global warming religion are demanding what other false religions have demanded – human sacrifices upon their altar.