Any attempt to act against the Syrian government will make Islamic State and other terror groups in the country stronger, London-based consultancy IHS Markit said in a recent report, calling such situation an “inconvenient reality” for Washington.

Over the last 11 months, 43 percent of Islamic State (Is, formerly ISIS/ISIL) military actions carried out were against the Syrian government forces of President Bashar Assad, the open-source data gathered by IHS Markit’s Conflict Monitor revealed.

The US-backed “moderate opposition” accounted for 17 percent of IS fighting between April 1, 2016 and March 31, 2017, with the remaining 40 percent being the jihadists’ skirmishes with rivaling rebel groups.

“It is an inconvenient reality that any US action taken to weaken the Syrian government will inadvertently benefit the Islamic State and other jihadist groups,” Columb Strack, senior Middle East analyst at IHS Markit, said as cited by the company’s website.

Strack described the current state of events in Syria by comparing Assad’s forces “the anvil to the US-led Coalition’s hammer.”

“While US-backed forces surround Raqqa, the Islamic State is engaged in intense fighting with the Syrian government around Palmyra and in other parts of Homs and Deir al-Zour provinces,” he said.

According to the analyst, weakening the Syrian forces, which are already overstretched on a large front, may lead to the jihadists moving from the desert to populated areas in the west of the country, which endangers such cities as Damascus and Homs.

Strack believes that Deir ez-Zor is currently the main strategic goal for Islamic State, as capturing the largest city in eastern Syria would allow the group to gain “a new major population center from which to run the Caliphate” after losing Mosul and Raqqa.

IHS Markit is considered on the leading providers of information, analysis and solution, boasting over 50,000 customers in highest business and political circles 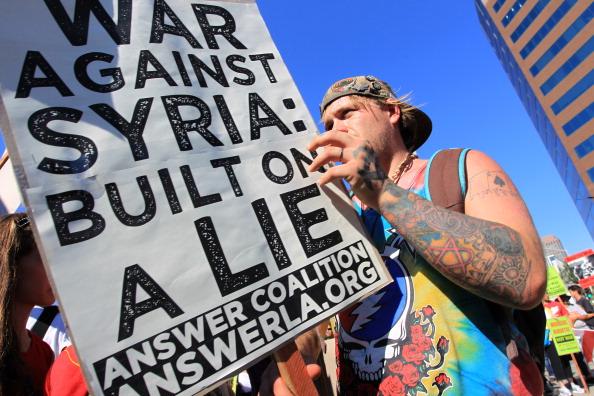 The red line in the sand was drawn by President Obama in August of 2012, and it was at that point he committed America to a rendezvous with war in Syria. The president only managed to respond publically in the hopes that the mainstream media and the liberals in the nation would view his tepid response as being presidential.

The president said this nearly as flippantly as he has commented on other pressing domestic or foreign issues, in the hope that his obedient mainstream media would ignore it and move on to shoring up his then re-election bid against challenger Republican presidential candidate Mitt Romney.

Since then, the president’s red line has moved with each international focus on the Syrian civil war conflict. In each event, Obama has kicked the can down the road. Several times this year when it was clear that according to international chemical weapon experts the deadly weapons of mass destruction were used, Obama feigned responsibility. This was not a failure to act, but a failure to lead.

Meanwhile, during his absence on the international stage as America’s Commander in Chief, he looked the other way as 100,000 plus Syrians died in the conflict. He first spoke about regime change in 2011, during the Syrian street demonstrations, but did little else, but played golf and found new and innovative ways to circumvent the U.S. Constitution.

Now, with the world watching Obama could not kick the can down the road because videos surfaced showing 1,400 Syrian victims of Sarin of a gas attack. The horror of seeing women and children murdered by yet unproven rebel or government officials had to move Obama to unavoidable action. Now in front of the entire nation and the world he had to accept responsibility for his own August 2012 words which have come back to haunt him.

Yet, he even managed to dither back and forth about what he said and what he meant. In each incarnation of Obama’s remembrance of how he would punish Syrian President Bashar al-Assad, he somehow could not make up his mind about sending Assad a well telegraphed love tap of missiles to keep him in line, while the Syrian president moved all of his military assets and chemical stockpiles.

While Obama could not determine which account of the red line he would erase next, country after country, including Britain have decided he had not made the case for war. In fact, according to the Washington Post they found 208 solid no votes against Obama's war resolution. Even as late as Sunday afternoon, ABC News has the House members leaning heavily in favor of voting the Syrian military use resolution down to defeat. Members of the Free Syrian Army reportedly attacked the Christian-dominated al-Duvair village in Reef on the outskirts of Homs on Monday, where they massacred its citizens, including women and children, before the Syrian Army interfered.

This reported attack comes shortly after intense fighting in the city of al-Qusseir over the weekend, in which Bashar Al-Assad’s forces inflicted heavy casualties on the rebels.

Assad’s forces launched an offensive in April in an effort to cut off supply lines to the rebels by taking the city and its surrounding areas from the rebel groups that had been entrenched there since last year. Two weeks ago, the Syrian forces reached the center of the city

While the sources describing Monday’s massacre are supportive of Assad, it’s possible that it occurred since the rebel groups fighting the Assad regime are composed mainly of members of al-Qaeda and al-Qaeda affiliated groups and have committed war crimes and atrocities in the past.

Jabhat al-Nusra, the branch of al-Qaeda that fought and killed American and allied troops in Iraq, have positioned themselves in Syria and control the rebel movement.