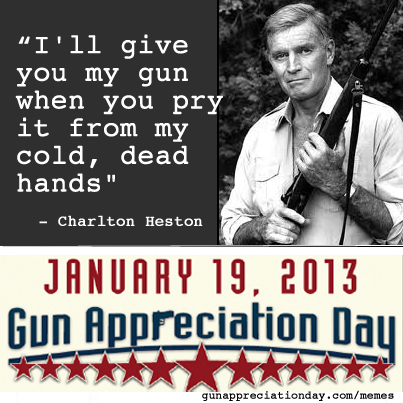 Gun Appreciation Day is not just a time to celebrate the right to bear arms, but it is a time to acknowledge the precious gift that no other nation on earth possesses. This is the gift for every man and woman in this nation to stand toe to toe with an oppressor either foreign or domestic; and announce, “As for me and my family my right to bear arms will not be abridged nor shall it be stolen!”

This day is your way of demonstrating that constitutional gun rights do matter. This is your opportunity to stand up and acknowledge that a nation that fought a War of Independence to be free from tyranny of an imperial elite will not bow on bended knee to a 21st century version of that now residing in the White House. January 19th is the nation’s day to go to your local gun range, gun store or gun show and bring your American Flag and a ‘Hands off my Guns’ sign to show your support!

In fact, according to a national Fox News poll released Friday, January 18th, 71 percent do not think tougher laws can stop shootings like the mass killings that occurred in Newtown, Connecticut in December. “Nearly twice as many voters say there would be less violent crime if more law-abiding Americans owned guns, than if guns were banned.”

On the other hand, liberal gun control organizations have launched advertising campaign to scare parents in homes across America into accepting the tepid rationale of President Obama’s official response to the Sandy Hook Elementary School massacre. Obama wants to disarm America be frightening America with edicts that do not address the reason for the mass killings.

No parent in America wants to be on the receiving end of a call from a school or receive a knock on the door from a police officer about fatal shootings at their child’s school. Yet, in the post Sandy Hook Elementary school shootings era, gun control alarmists have ratcheted up their threats on gun rights, by using the main stream media. The words of these media talking heads has been vitriolic and poison the airwaves that permeate American homes daily with lies.

Gun control measures are not new and one of the most infamous examples where this has been used as a precursor to attacking its own citizens was done by Adolph Hitler and his Nazi government, five years after being in power. Sound familiar.

In 1938, the Nazi Party enhanced the Weapons Law and enacted handgun control. Firearms ownership was restricted to Nazi party members and other "reliable" people. Later that year, the government barred all Jews from owning any weapons or seeking weapons from businesses that sold them. 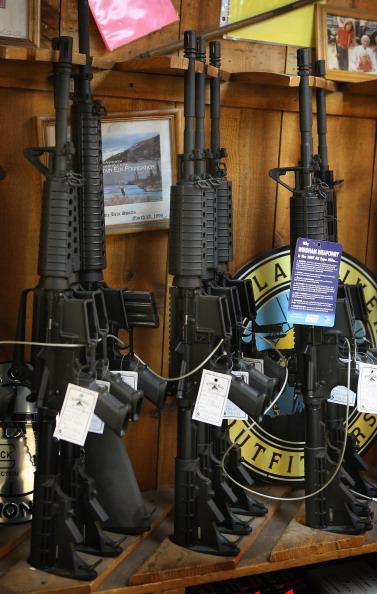 Where do you draw the line in the sand in defense of your life, your family and your community? What happens when the President of the United States, determines that it is illegal for you to use the very guns which are constitutionally protected because he issues an executive order against ownership? What alternative are you left with, and who can you turn to?

Your weapons which are constitutionally protected may need a local sheriff who will stand against the federal tidal wave of unconstitutional White House directives to protect gun rights!

States and local sheriffs in several jurisdictions are leading a resurgent awakening in the nation in protecting the gun rights of citizens from being quashed by federal edicts. In fact, some of these states which are considering legislation to criminalize efforts of federal employees that attempt to enforce gun control executive orders. Some of these states considering legislation action include Alabama, Missouri, Montana, South Carolina, Texas, and Wyoming, among others.

Reaction to the proposed legislative edicts by President Obama for a reinstated sticker assault-weapons ban and a 10-round limit on magazines is raising concerns by local law enforcement officials. According to CNS News, Oregon, Linn County Sheriff Tim Mueller has already told Vice President Biden in a letter, that he will not enforce any recommended gun laws he deemed unconstitutional.

Another sheriff has joined the growing effort to prevent the assault on legal law abiding citizen’s Second Amendment rights in the state of Kentucky. According to Breitbart, Sheriff Denny Peyman of Jackson County, Kentucky stated recently, “My office will not comply with any federal action which violates the United States Constitution or the Kentucky Constitution which I swore uphold."

A state legislative leader in Texas is tackling this gun control overreach by the Obama administration and gun control advocates. Rep. Steve Toth (R) is planning legislative action to make it illegal for the state of Texas to enforce any federal laws that restrict the constitutional rights of its citizens to own semi-automatic firearms or the size of gun magazines.

Is this not the legal obligation of all local sheriffs and state legislative officials to uphold the dictates of the U.S. Constitution as well as their own state constitution? Is this not their oath of office? In fact, it makes perfect sense that every county, parish and borough in America has a sheriff or law enforcement officials who has taken such an oath to uphold the U.S. Constitution.