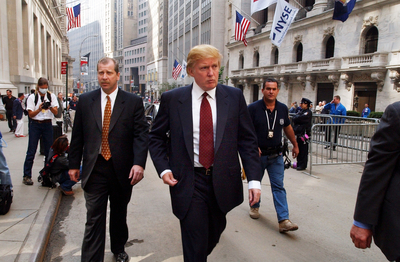 Donald Trump and hundreds of his workers helped search the rubble for survivors after the September 11 terrorist attacks in Lower Manhattan.

My fellow Americans, I became you; you became me. On that tragic day we became one: Let us never forget

The old man behind the country store counter clasped my hand with eagle talon strength, squeezing tighter and tighter, his pained, bloodshot eyes locked with mine. Panicking, wishing I had not stopped for a cold drink, disregarding change from the bill on the counter for payment, I struggled to free my hand and flee.

“They hit us! They hit us!” he bellowed over and over. “Me and my brother … we fought in the Pacific. My brother, he never come back. I seen war’s death and destruction, but it was over yonder. Now I see it all over again, right here in America — the country my brother died for!”

“Mister, what in God’s name are you talking about?” I asked when he finally released my hand and turned away, trembling and sobbing. He motioned me back into tiny living quarters that provided his only comfort over countless lonely years, eking out a living, selling snacks, cold drinks and sundry items to a trickle of customers in this sparsely populated outback region.

What I saw on the tiny television simply would not register. One minute it seemed to be two giant sand castles — perhaps built by laughing, happy children. The next minute they seemed to crumble before an unseen wave, collapsing in an enveloping cloud of dust, debris, and destruction.

But in the minute I will never forget — the minute no real American will ever forget — what I saw was the result of two hijacked commercial jets arcing across a clear blue New York sky, streaking at several miles per hour into the World Trade Center’s twin towers, killing, injuring untold thousands of innocent people, and leaving countless more mourning their loss.

Before that minute, the part of me that had been typically American — glad to be one, but not always mindful of, nor thankful enough, for the opportunities and freedoms I too often took for granted — became as American as the stars and stripes sewn by Betsy Ross. In that minute, I grasped the true meaning of E Pluribus Unum: from many, one.

In that minute, I became every American who ever was, is, or yet to be. I became the first Pilgrim stepping on Plymouth Rock. I became Neil Armstrong stepping on the moon. I became Generals Lee and Grant at Appomattox. I became those patriotic heroes: Alvin York of World War I and Audie Murphy of World War II. I became Ira Hayes and other marines, hoisting Old Glory at Iwo Jima.

My fellow Americans, I became you; you became me. On that tragic day we became one: Let us never forget.