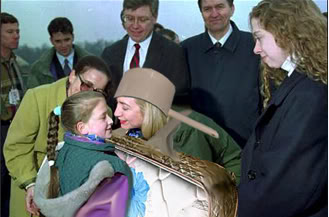 The Democratic Party is already tripping over themselves in their hasty preparation to lay the groundwork to elect the first woman president to follow up on their successful election of the first black president. In the next few months we will begin to see a lot of information resurface in regards to Hillary “formerly Rodham” Clinton’s past exploits, scandals, and sometimes confusing history.

I’m here to help get the ball rolling early on that. As the current occupant of the white house was elected with virtually no vetting whatsoever, a good many of us believe it is important to get ahead of the game this time around as soon as humanly possible. Below is an inspiring story along those lines that I’m sure you’ll enjoy.

In case you didn't know or don’t remember, the former first lady and later Secretary of State Mrs. Clinton had a very close call during a goodwill trip to Bosnia in the nineties during the bloody Bosnian war. It occurred during the bloody Bosnian war while her husband was president. In an apparent horrible failing of pre-landing intelligence and security she "remembers landing under fire...we had to lower our heads and run for the cars..." Perhaps even more alarming is the fact that not only was her life apparently in danger, but she had Chelsea with her as well.

How brave and courageous for her to have put her life on the line in an active war zone to help bring peace to an oppressed people.

Fortunately for her, a CBS report includes the footage of this traumatic and heroic action. It is a dramatic piece of footage and one that will undoubtedly be included in her upcoming election commercials as an example of her grace and courage under fire.

Mrs. Clinton has accused her critics in the past of “swiftboating” her in regards to her own claim of coming under fire by Serbian snipers. I can only assume that the term swiftboating is defined as “pointing out the truth in response to a Democratic presidential candidate’s dubious claim.”

How Hillary Clinton remembers it:

This, of course, is just one of the many well documented lies perpetrated by “she would replace ‘the One’ as the leader of the free world.”