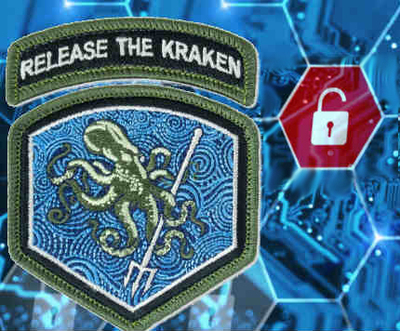 The Kraken is a Department of Defense, Cyber Warfare Program designed to track, hack, expose, and acquire evidence of nefarious activity from enemies both foreign and domestic.  (...we have enemies in abundance)

The swamp rats are in the CIA, FBI, DOJ, Silicon Valley, the Media, Academia, the leadership as well as many in the rank and file within the Democrat Party and their hand puppets, BLM and Antifa. The program is designed to expose actions by any group wishing to do harm to the United States. This group does indeed want to do us harm. It is their intent to overthrow this government and take complete control.

Democrats capable, willing to silence millions of American voices, take on an operation of cyber-warfare against the United States of this magnitude during a presidential election is beyond disturbing, comprehension and beyond sedition. It is treason!!!

While the media, including Fox News, has been withholding overwhelming evidence of election fraud, and putting on a 24/7 continuous blitz that Trump lost and needs to concede, Democrats are announcing their intention to deliver us to a global reset. They have compiled an enemies list (Jennifer Rubin, Washington Post), and make no secret that Trump supporters need re-education (Bernie Sanders’ field organizer, Kyle Jurek). This is an operation to destroy this nation as founded, and people are becoming increasingly distressed, and are now suspicious that some massive fraud has taken place. And indeed it has. All added to the fear mongering from Democrats and the media for a minor pandemic to keep us off balance.

When Sidney Powell recently said to Lou Dobbs on Fox Business that the Kraken was going to be released, it was not a clever quip related to Greek mythology. Ms. Powell looked straight at the camera, never blinking.

Ms. Powell and the Trump Team contend that President Trump won the election in a massive landslide. They argue that an algorithm was plugged into the servers to shift votes from Trump to Biden, that votes were deleted, that the envelopes millions of ballots rode in were tossed so as not to prove their mismatched signatures. Poll workers were told not to look for defects in ballots. Also, thousands of ballots arrived after election day in the middle of the night with all votes for Biden, a statistical impossibility. Many precincts also reported that there was a multitude of over-voting…more votes than registered voters, all for Biden. 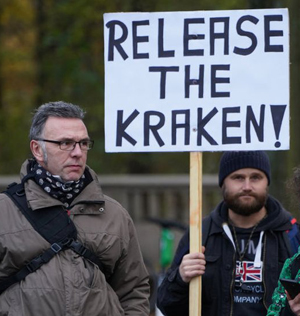 ability to drag and drop votes anywhere they wanted, and were infected with a malware called Qsnatch, allowing unauthorized persons to log into the servers from anywhere in the world. And now Eric Coomer, Voting Systems Officer of Strategy and Security for Dominion Systems, a member of Antifa, is nowhere to be found to answer questions. These servers were originally built for Hugo Chavez, who had every intention of being in power for life. Giuliani’s team will also show that illegal ballots were produced in abundance, with some that looked like they were never even folded to fit in an envelope.

There is little doubt this election will prove to be the greatest act of cyber warfare in U.S. history, where some political operatives even had financial ties and support from Communist China. The former Defense Secretary and Democrat, Leon Panetta, said in 2012: “Well, there’s no question that if a cyber attack, you know, crippled our power grid in this country, took down our financial systems, took down our government systems, that that would constitute an act of war.”

These crimes are so egregious, so seditious, so traitorous, as to harm, maybe permanently, the integrity and security of our election system, the bedrock of our Republic. This election was not an election at all, it was an attempt to take over the government of the United States by the Deep State and the Democrat Party, a self-proclaimed resistance, an opposition, to destroy this nation and remake it in their image, ready for global governance.

This is the party of the 60s anti-America, pro Marxist radicals, the street revolutionaries. If the Trump Team and Sidney Powell are successful in proving their cases, they deserve no less than the Presidential Medal of Freedom, the highest civilian honor.

This is not the Democrat Party of past generations. This is the party of the 60s anti-America, pro Marxist radicals, the street revolutionaries. They are the radicals that planted bombs in police stations, the U.S. Capitol, and the Pentagon, traveled to North Vietnam to support the enemy, that now dominate our media, our education, our political institutions. We have slept and winked at their discord way too long. They have now morphed into an army of enemy combatants. Bill Ayers, of the 60s and 70s Weather Underground, even suggested in September of this year that the civil war has already begun.

That the Democrat Party, a major political party in the United States, is capable and willing to silence millions of American voices, to take on an operation of cyber-warfare against the United States of this magnitude during a presidential election is beyond disturbing, comprehension and beyond sedition. It is treason.