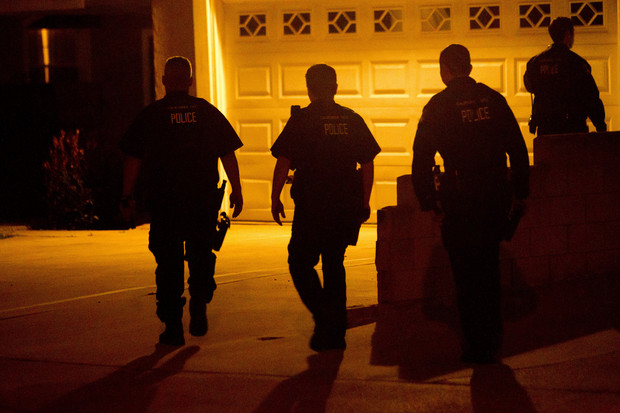 California Department of Justice police agents walk towards a house near Ontario, California on March 5, 2013.

California Department of Justice police agents walk towards a house near Ontario, California on Tuesday, March 5, 2013. The agents, working for the only state-level program to confiscate illegal firearms from owners, targeted people who’d once legally purchased firearms and lost the right after being convicted of violent crimes, committed to mental institutions or hit with restraining orders.

Special Agent Supervisor John Marsh who coordinates the operations around California, said: “We’re not contacting anybody who can legally own a gun. The only people we’re contacting are people who are prohibited from owning guns.”

Weapons and ammunition seized from the home of Lynette and David Philllips by agents with the California Department of Justice police in Upland, California.

Lynette Phillips, 48, and her husband, David Phillips, 51, sit in their home in Upland, California on March 5, 2013. Lynette, a nurse, had to surrender three guns after spending two days in a mental hospital in December.

Special Agent Supervisor John Marsh with the California Department of Justice drives out to seize illegal firearms near Ontario, California on March 5, 2013.

They knocked on the door and asked to come in. About 45 minutes later, they came away peacefully with three firearms.

California is the only state that tracks and disarms people with legally registered guns who have lost the right to own them, according to Attorney General Kamala Harris. Almost 20,000 gun owners in the state are prohibited from possessing firearms, including convicted felons, those under a domestic violence restraining order or deemed mentally unstable.

“What do we do about the guns that are already in the hands of persons who, by law, are considered too dangerous to possess them?” Harris said in a letter to Vice President Joe Biden after a Connecticut school shooting in December left 26 dead. She recommended that Biden, heading a White House review of gun policy, consider California as a national model.

As many as 200,000 people nationwide may no longer be qualified to own firearms, according to Garen Wintemute, director of the Violence Prevention Research Program at the University of California, Davis. Other states may lack confiscation programs because they don’t track purchases as closely as California, which requires most weapons sales go through a licensed dealer and be reported.

“Very, very few states have an archive of firearm owners like we have,” said Wintemute, who helped set up the program.

Harris, a 48-year-old Democrat, has asked California lawmakers to more than double the number of agents from the current 33. They seized about 2,000 weapons last year. Agents also took 117,000 rounds of ammunition and 11,000 high-capacity magazines, according to state data.

“We’re not contacting anybody who can legally own a gun,” said John Marsh, a supervising agent who coordinates the sometimes-contentious seizures. “I got called the Antichrist the other day. Every conspiracy theory you’ve heard of, take that times 10.”

The no-gun list is compiled by cross-referencing files on almost 1 million handgun and assault-weapon owners with databases of new criminal records and involuntary mental-health commitments. About 15 to 20 names are added each day, according to the attorney general’s office.

Merely being in a database of registered gun owners and having a “disqualifying event,” such as a felony conviction or restraining order, isn’t sufficient evidence for a search warrant, Marsh said March 5 during raids in San Bernardino County. So the agents often must talk their way into a residence to look for weapons, he said.

At a house in Fontana, agents were looking for a gun owner with a criminal history of a sex offense, pimping, according to the attorney general’s office. Marsh said that while the woman appeared to be home, they got no answer at the door. Without a warrant, the agents couldn’t enter and had to leave empty- handed.

They had better luck in nearby Upland, where they seized three guns from the home of Lynette Phillips, 48, who’d been hospitalized for mental illness, and her husband, David. One gun was registered to her, two to him.

“The prohibited person can’t have access to a firearm,” regardless of who the registered owner is, said Michelle Gregory, a spokeswoman for the attorney general’s office.

In an interview as agents inventoried the guns, Lynette Phillips said that while she’d been held involuntarily in a mental hospital in December, the nurse who admitted her had exaggerated the magnitude of her condition.

Todd Smith, chief executive officer of Aurora Charter Oak Hospital in Covina, where documents provided by Phillips show she was treated, didn’t respond to telephone and e-mail requests for comment on the circumstances of the treatment.

Phillips said her husband used the guns for recreation. She didn’t blame the attorney general’s agents for taking the guns based on the information they had, she said.

“I do feel I have every right to purchase a gun,” Phillips said. “I’m not a threat. We’re law-abiding citizens.”

No one was arrested. Most seized weapons are destroyed, Gregory said.

“It’s not unusual to not arrest a mental-health person because every county in the state handles those particular cases differently,” Gregory said by e-mail. “Unless there’s an extenuating need to arrest them on the spot, we refer the case” to the local district attorney’s office, she said.

of 10 Next
This reply was deleted.