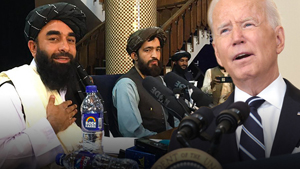 How Did The Taliban Know The Joe Biden Afghan Surrender Was Coming? Not all Taliban members are from Afghanistan many of them are U.S. Citizens and white and may hold high offices in Washington.

They knew. The Taliban knew that the newly-elected Joe Biden regime would pull out all the stops in Afghanistan leaving the entire country and anyone left there at their heartless mercy.

How is it possible that the Taliban knew about the human catastrophe before the 10,000 to 45,000 Americans in Afghanistan knew?

Imagine trusting not your own forces but trusting in the brutality of the blood-thirsty Taliban!
How is it possible that any American administration—Democrat or Republican—could leave the Taliban some $48-billion worth of weapons, including helicopters, armoured vehicles and fighter jets?

It’s because as columnist/videographer Kelly O’Connell asserts in today’s CFP column: It was “a Purposeful Choice by Far Left Dems To Destroy US Global Standing”.

“What is happening in Afghanistan is not by accident.

“The disaster that is Afghanistan is so defective in so many profound and different ways that it has to be a purposeful decision to try and destroy America’s standing in the world. Nobody could make so many mistakes at that level and have it all be by accident. We know the leftist Biden administration has already done everything they can to sabotage America. And by creating such a gigantic avoidable disaster we are communicating to the world that we can’t be trusted.”

Imagine trusting not your own forces but trusting in the brutality of the blood-thirsty Taliban!

There’s an apparent déjà vu and familiarity about the human tragedy that is playing out in Afghanistan.

Was it because it was being politically planned by former President Barack Obama when he released five prominent members of the Afghan Taliban from the U.S. military prison at Guantanamo Bay, Cuba in exchange for captured American Army Sgt. Bowe Bergdahl, in 2014?

“Bergdahl, who had been held in Taliban custody since 2009 when he wandered off a U.S. army base, was given a dishonorable discharge last year and fined $1,000 on charges of desertion and misbehavior. (The Associated Press, Oct. 30, 2018)

Was a proven U.S. army deserter who put his own brothers in arms at risk by having to go look for him worth the release of five top Taliban commanders?

Is it merely coincidence that it was Taliban spokesman Zabihullah Mujahid who first announced that the five Obama-released commandos had joined the insurgent group’s political office in Qatar—and was first to announce on Tuesday that the Taliban was now in control in Kabul, or was it something more sinister?

“Why did it take a French politician to call out that Twitter is now the playbook of the Taliban? “ (Canada Free Press, Aug. 16, 2021)

“Zabihullah Mujahid’s account is not verified but has nearly 280,000 followers and is regularly cited by major news outlets. He recently tweeted an update on “military units” entering Kabul. He wrote that their “advance is continuing normally.”(Fox News, Aug. 16, 2021)

Was Barack Obama working in tandem with the Taliban as far back as 2014?

“They will now be among Taliban representatives negotiating for peace in Afghanistan, a sign some negotiators in Kabul say indicates the Taliban’s desire for a peace pact.” (AP)

Is what we are seeing this week in Afghanistan “Peace”?

“Others fear the five, all of whom were close to the insurgent group’s founder and hard-line leader Mullah Mohammed Omar, bring with them the same ultra-conservative interpretation of Islam that characterized the group’s five-year rule that ended in 2001 with the U.S.-led invasion.” (AP)

“In an unexpected development, Pakistan also bowed to a long-standing Afghan Taliban demand that it release its senior leader, Mullah Abdul Ghani Baradar, who had been in jail in Pakistan since 2010. At the time, Baradar was reportedly jailed after bypassing Pakistan to open independent peace talks with Hamid Karzai, who was then Afghanistan’s president.

“Baradar issued an audio message after his release to the Taliban. The Pashto-language message, heard by an Associated Press reporter, seemed to indicate he was preparing for a role in the insurgent movement moving forward.”

“When Taliban leader Mullah Abdul Ghani Baradar arrived at Afghanistan’s Kandahar airport from Doha on a Qatari Air Force C-17 on Tuesday, he was welcomed by jubilant Islamist militants as a conquering hero. Yet Baradar’s success had come not on the battlefield but in the dealmaking room.(UKTodayNews, Aug. 20, 21)

“Back in 2010, Baradar, then a top Taliban military leader, had been arrested in the Pakistani port city of Karachi in a joint operation by Pakistani and US spies. Eight years later, he was freed, supposedly at Washington’s behest, and flown to Doha to head the Taliban political office. This is the de facto embassy of the militant group that ruled Afghanistan under strict Islamic law from 1996 until the US-led invasion in 2001.

“In Doha, Baradar represented the Taliban in talks with US president Donald Trump’s administration, which culminated in the February 2020 deal for withdrawal of all US troops from Afghanistan. That, in turn, paved the way for the Taliban’s seizure of the Afghan capital, Kabul, on Sunday, after an almost unobstructed sweep across the country, as Afghan army units, demoralised by the loss of US support, stood down.”

God help America and all who depend on her stability because from here on in, it is only going to get a lot worse, that is unless We the People remove the Washington trailors.