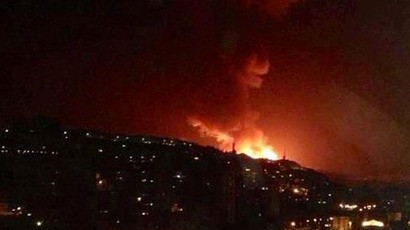 What’s disturbing about this picture?-You Decide:

“At the end of a week when the Obama administration signaled its intention to send heavy weaponry to Al-Qaeda-led Syrian rebels, Israel launched air strikes inside Syrian territory that will only serve to embolden jihadist militants who have openly espoused their desire to destroy both Israel and the United States.

Israeli rockets bombarded areas on the outskirts of Damascus early this morning in an apparent raid on Iranian missiles bound for Lebanon’s Hezbollah. This followed a separate Israeli attack a few days previously, making it three Israeli assaults on Syria so far this year.

Syria’s Information Minister Omran Zoabi responded by warning that the attacks “open the door to all possibilities,” although it is not expected that Bashar Al-Assad will order any military response. Just as it has been demonized for the last two years for responding to an insurgent insurrection, any attempt by Syria to defend itself would provide the US and Israel with the green light to launch a full scale military assault.

Imagine if Syrian warplanes fired rockets into Tel Aviv destroying Israeli military facilities. Israel would instantly treat such a move as a declaration of war and the United States would hop on board to completely raze Syrian cities to the ground within days. Yet Israel bombards Syria over the course of two days and Syria is expected to sit back and do nothing.

Israel has taken the opportunity to attack Syria safe in the knowledge that Damascus’ commitment to fighting FSA insurgents means they won’t be able to retaliate, illustrating once again the symbiotic relationship between Israel and Al-Qaeda terrorists.

“The new Israeli attack is an attempt to raise the morale of the terrorist groups which have been reeling from strikes by our noble army,” said Syrian TV in response to the attack, adding that the assault was “coordinated with terrorists.”

By launching attacks that weaken and distract Damascus from its focus on defeating western-backed insurgents, Israel is aiding the very same rebels who have burned Israeli flags in public and vowed to crush the Zionist regime once they are finished toppling Bashar Al-Assad.

Israel’s attack on Syria again highlights the fact that Al-Qaeda is an organization under the control of the United States and Israel which is used to destabilize Israel’s enemies in the region. Not only has Israel supported Al-Qaeda-led rebels in Syria, even setting up field hospitals for injured fighters, but back in 2002 Israel was caught actually creating an Al-Qaeda group in order to justify attacks on Palestinians in the Gaza Strip.

As we have exhaustively documented, opposition fighters in Syria are now dominated by sectarian extremists and jihadists who have repeatedly emphasized their hatred for America and their allegiance to Al-Qaeda.

Multiple reports now confirm that the individuals responsible for a plethora of atrocities, many of them part of the Al-Qaeda group Jabhat al-Nusra which “killed numerous American troops in Iraq,” are leading western-backed rebel forces in Syria. After the organization was declared a terrorist group by the US State Department, 29 different US-backed Syrian opposition groups pledged their allegiance to al-Nusra.

The timing of the Israeli attacks also speaks volumes given that the Syrian Army has begun to win the war against the Free Syrian Army, taking back key areas of cities such as Homs in recent weeks.

Israel and the United States will stop at nothing to eliminate so-called rogue states like Syria and Iran, to the point of aiding and arming radical jihadists that claim to be in opposition to Israel, yet who routinely help Israel accomplish its hegemonic agenda in the middle east.”

Note: The following articles, videos and audios relate to this disturbing issue:

“War is an area of uncertainty; three quarters of the things on which all action in War is based are lying in a fog of uncertainty—Carl von Clausewitz”

There is no better testimony that the situation in Syria has deteriorated into a full war than the fogginess accompanying reports from there. “Yesterday, May 3, 2013, unclear targets were hit by unknown forces; but maybe it happened the night before.” This is the only possible conclusion if integrating all what was claimed by mainstream media.

CNN quoted unnamed US officials as saying that Israel had most likely conducted the strike “in the Thursday-Friday time frame” and that Israel’s warplanes did not enter Syrian airspace; they did not believe that Israel targeted a chemical weapons facility. CBS News cited US sources claiming that Israel had targeted a warehouse. On Saturday, an Israeli official told AP that Israel had targeted a shipment of advanced missiles. Bashar Ja’afari, the Syrian ambassador to the United Nations told Reuters: “I’m not aware of any attack right now.” Yet, later, Syrian sources acknowledged the damage but denied the airstrike. NBC reported that a shipment of weapons headed for Hezbollah in Lebanon had been the target. Lebanon’s Foreign Minister, Adnan Mansou, claimed that IAF jets attacked targets in Syria from Lebanese airspace. Other reports were no less confusing.

The entire world had joined forces to spoil this article. How could I extract anything of value from this mess?

Determined not to let the fog of war foil my plans, I got a fan and cleared the area from itspoisonous clouds. The next step was to search Hebrew articles attempting to circumvent Israel’s strict censorship laws. Israeli news outlets often circumvent the censor by reporting stories “as quoted from foreign news sources,” which are not subject to the restrictions of the Israeli military censor (Israel Military Censor hits the USA). Such a report could still be an Israeli Government manipulation inwards, towards its own population, but it could provide useful hints.

Thanks to the fan I had the wind on my back. Minutes later I found what I was looking for in Yedioth Ahronot, the largest paid Hebrew newspaper. The reporter was a well known one, Tzvi Barel. Better even, the article hadn’t been translated yet to the English edition. It started with a thorough description of the targets hit. Only somebody watching the entire theatre from above and the perpetrator could know all these details. Yet, the article sited “sources with the Syrian rebels.” Syrian rebels do not have satellites. Bingo.

Related to this:  Israel Intelligence Directorate Sends America to War   From Iraq to Turkey via Israel

Did you know?   Israel Buys Croatian Path to Syrian Rebels

The Israeli newspaper claimed to have retrieved the data from a Syrian rebels website (but it didn’t provide the address; nasty!). It said that the rebels claimed to have received the data from a source within the Syrian Transport Ministry. According to this source, Israel conducted an airstrike on Damascus Airport. The targets hit were a jet-fuel depot, Syrian Army munition warehouses, military airstrips, and a civilian cargo airplane that had arrived from Iran. Overall, five targets were hit directly and exactly. Four of them were adjacent, the Iranian plane was about one kilometer from the others. Thus, this was unlikely to have been a mortars’ attack by the rebels as claimed by Syrian officials.

This solves the puzzle, if assuming that the Iranian plane contained weapons for the Hezbollah in Lebanon, and that the Israeli Air Force had fired long range missiles from Lebanon into Syria. Under these constrains, most of the reports were accurate. Simply each one provided a different angle of the event. Moreover, it strengthens recent events showing a sharp change of Israel’s policy toward Syria.

Moreover, veteran readers of this website may have right now a déjà vu moment. On January 29, 2013, the Israeli Air Force attacked a Syrian convoy in Jamraya, between Damascus and Lebanon (Assad’s Best Friend Attacks Syria), an event that was accompanied by a fogginess similar to the current one. For many years, the Syrian-Israeli border has been Israel’s quietest border. As analyzed in the article linked in this paragraph, that the leaders of both countries were silently cooperating between them. Syria and Israel had been fruitfully collaborating for a generation. This is a basic characteristic of many situations studied by Game Theory. In small enough groups, let’s say oligarchies<img src=”http://www.assoc-amazon.com/e/ir?t=roto-20&amp;l=ur2&amp;o=1” alt=”” width=”1” height=”1” border=”0” />, opposing subgroups can collaborate fruitfully without having direct contact. Since they have shared interests—in this case control over their respective civilian populations—they benefit from similar strategies, like the portrayal of each other as an archenemy while behaving like friends. While the ignorant masses applaud ultra-nationalistic discourses, deals are silently agreed; basic Game Theory.

Yet, now this has changed. Israel is attacking Syria in a variety of Ways. Recently it was reported a possible supply of weapons to the rebels by Croatia, to which Israel was an extorting party. Moreover, Israel opened a path linking the Mediterranean Sea with the Jordan/Syrian/Iraqi triple border. The Croatian weapons were handed to the rebels from Jordan. Moreover, there were the two abovementioned Israeli airstrikes on Syria and many unprecedented exchanges of firebetween Israelis and Syrians on the Golan Heights. That was enough to prove the point. Yet, the astonishing news were at the bottom of the Hebrew article.

“A question must be asked,” says the article and continues, “Could Israel, or maybe it would be asked to, expand its airstrikes in Syria under the disguise of blocking weapon convoys to Hezbollah and other organizations and as an aerial umbrella designed to protect the rebels? This could be a comfortable solution to the USA, Turkey and Arab countries that are not ready to get involved directly without wide international support. Israel will create a new routine in which Syria will be a legitimate area for its air force strikes as Lebanon is.”

A few days ago there were false rumors that the Syrian Government had used chemical weapons and Israel sent the USA to war (Israel Intelligence Directorate Sends America to War). The plot failed, and now  Israel is planning to drop its American bombs surplus on Syria. The fog is gone.”

Obama To Arm Al-Qaeda Terrorists In Syria: White House set to green light weapons to jihadists who have vowed to destroy America!-Posted on InfoWars.com-By Paul Joseph Watson, Infowars.com-On May 1, 2013:

Above the Law: Israel’s Latest Military Rampage Over Syria!-Posted on Before It’s News-By 21st Century Wire-On May 5, 2013:

The Obama Admin’s blatant disdain for US Military who teach truth about Islam!-Posted on Allen West Republic-By allenwestrepublic-On May 5, 2013:

In Wake of US-Israeli Attack on Syria, UN Reveals Terrorists Not Go...!-Posted on InfoWars.com-By Tony Cartalucci, Infowars.com-On May 6, 2013:

Video: Just Like Iraq: U.S. Arms Butchers Who Use Chemical Weapons On Civilians … and Then Tries to Frame Someone Else!-Posted on WashingtonsBlog-On May 6, 2013:

Was it the Syrian rebels who used Sarin gas on their own people?-Posted on American Thinker-By Rick Moran-On May 6, 2013:

Video: WHITE HOUSE: NO TIMELINE ON ACTION AGAINST SYRIA!-Posted on Breitbart TV-On May 6, 2013:

The Real-Deal About Obama And Congressional/Court Silence!