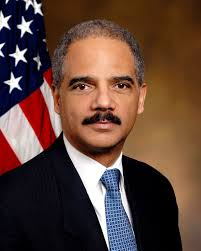 Eric Holder is the Attorney-General of the United States, arguably our number one crime fighter.

Continuing a departure from this role, he recently said felons essentially shouldn't lose voting rights as part of their punishment.

This appeal to states overseeing this issue is his latest salvo, along with president Obama, in championing crack dealers, whose utter destruction of the inner city is called, " victimless " by liberals, in both parties.

They feel this class of criminal has been racially discriminated against and are moving heaven and earth on their behalf!

He aired this recommendation during a speech at the Georgetown University Law Center, despite numerous states having procedures to restore voting rights.

I grew up within and became an anti crime activist in a crack-destroyed inner city community. My suggestion to prospective Black male felons is pick a state with lenient voting rights restoration policies before crying injustice.

Having seen this hell on earth first hand for decades, I feel losing your voting rights for awhile after incarceration, is a small price to pay in exchange for what you've inflicted upon those who can't afford private security, lobbyists or, in the case of retirees & broke younger adults, relocation expenses to escape your chaos.

Shame is something I don't hear anymore in crime discussions.

Black men who poisoned low income communities and used them as free fire zones, should feel ashamed of themselves.

Lowering the bar for us to subterranean levels only confirms the low opinion held by those doing so.

If shame can't occur independently, then serious sanctions help remind felons of the severity of their crimes.

Losing civil rights others died to have recognized is fair considering how crack dealers destroyed much of the legacy of the 1960s.

For the record, I'm not opposed to felons getting voting rights restored after proving rehabilitation.

The tragic fine print in this scenario is the same inner city folks who become crack dealers, whom liberals in  both parties are courting, don't vote.

Inner city polling places are routinely closed because of chronically low turn out. The electoral process isn't a major concern in these zip codes.

I think the Attorney General is pleading voting rights for hold up men and crack dealers more to massage liberal sentiments ( and compete with Rand Paul ), than unshackling folks who chained themselves by committing felony offenses.