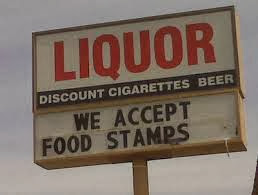 As the worst and dullest in our nation fast on behalf of amnesty for invading criminals, an unintended consequence has resulted:

An unprecedented glut in the supply of food stamps has bureaucrats in the US Department of Agriculture (USDA) in a panic over what to do with all those unused food stamps.

A USDA spokesman reports that the glut is so severe that agency broadcasts (in Spanish) into Mexico to promote food stamps has been scaled back to just two shifts, leaving the graveyard shift and tens of millions of illegal alien wannabes in Mexico grossly underrepresented.

Domestically, food stamp gluts have become pandemic in California, Texas, and Georgia where millions of illegal aliens have joined the fast to protest the lack of respect for Mexican culture and tradition.

Highlighting the “Fast for Families” scam, Vice President Joe Biden made a surprise visit to the D.C. Mall and passed along his great wisdom with these words:

“As my father would say, come hell or high water, we’re going to win this,” Biden said.”

Those who know the VP have observed that the last time he was this giddy was at the signing ceremony for Obamacare when the VP hugged Barack Obama and gushed joyfully, “This is a big f****** deal!”

And so it is that the American people wait to see if the US Congress will repeat the insanity of Obamacare by making legal 11-40 million invading criminals.