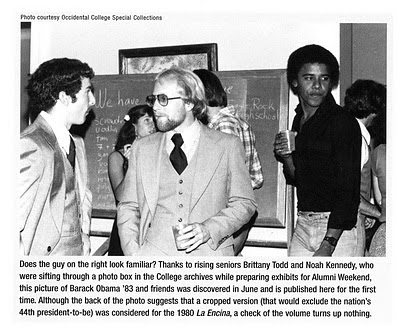 I am kind of proud to report that I got a call from Dinesh D'Souza inquiring about this photograph the young Obama. I explained that I found it while I was skimming the Occidental College alumni magazine (Summer 2010). At the same time,  I also went through the class notes and found that Hasan Chandoo has been in touch with my old girlfriend Caroline Grauman-Boss and her friend Susan (Keselenko) Coll over the years.

I expect that all additional information regarding the lasting social ties between young Obama and his Occidental College friends will give additional credibility to my statements that I knew the young Obama and can affirm that he was a Marxist socialist in 1980-1981. As I have reported elsewhere, Obama and I used to be part of a strong, committed group of revolutionaries. The only difference, as far as I can tell, is that I aged out of that obnoxious ideology in my mid-20s.

Also, this photo illustrates other themes I've communicated regarding the young Obama including the fact that I never saw him with a girl and that he was strikingly effeminent at the time. The larger point, of course, is that the picture of himself that he created in Dreams from My Father is very different from the real Obama that I knew during the 1980-1981 school year.

UPDATE #2: Ironically, Michelle Robinson - the future first lady - apparently had her own doubts about the young Obama. She asked her brother Craig Robinson to check out Barack. Here is a great passage from Christopher Andersen's book, Barack and Michelle: Portrait of an American Marriage:

Right after the game, Craig called Michelle with his verdict. "Your boy is straight," he told her, "and he can ball." (p. 126.)

Obviously, I was not the only person in young Obama's life who had questions about his sexual identity.

UPDATE #3: Jerome Corsi has another new article regarding Obama's time in Chicago which suggests that Obama hid his gay life to become president.

UPDATE #4: Rachel Maddow at MSNBC has launched an attack seeking to ridicule my first impression of young Obama.

I imagine Maddow does not have the nerve or the guts to air my complete and unedited first impression of the young Obama. Nevertheless, I am hoping this little bit of national television exposure will cause more people to look up my take on young Obama and judge its accuracy for themselves.