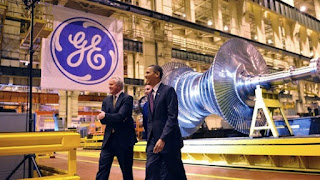 Part two of DOE “Junk” Loans and Cronyism, exposing how General Electric –– CEO Jeffrey Immelt, Chair of Obama’s Job Council –– has raked in over $3 billion, and counting, from the Obama "green" stimulus.

As I was preparing to expose one of the big fish in this green energy scheme –– how General Electric has raked in at least $3 billion of President Obama's "green" stimulus money –– two more government-backed renewable energy projects made headlines. Abound Solar went bust and it seems that Nevada Geothermal Power is going down the drain, both included in the Department of Energy's excessively risky loan portfolio, adding more embarrassment to the president’s “highly touted green energy initiative."

Last April, I began to unleash years of research starting with the "Department of Energy “Junk Loans” and Cronyism, Introduction," setting up the first in a series of at least five topics that will prove cronyism and corruption are the driving forces behind President's Obama's green energy agenda, with total disregard for our economy and national debt.

As a recap: the March 2012 House Oversight Investigation revealed that 23 of 27 recipients of the loan guarantees were rated as junk status investments. And according to GAO statistics (and emphasized in the June 19th Congressional hearing), "For the 460 applications to the Loan Guarantee Program (LGP), DOE has made loan guarantees for 7 percent and committed to an additional 2 percent."

And who were the "lucky" 7 percent? Of the 27 loans issued (26 as BrightSource was counted twice in the House Oversight report) through the 1705 LGP to 21 firms, virtually all of them have meaningful political connections (bundlers, donors, supporters) –– to either President Obama or other high-ranking Democrats — or both!

To add insult to "taxpayer injury," in that same June 19th House Committee on Oversight and Government Reform Hearing, Dr. De Rugy (a senior research fellow at the Mercatus Center at George Mason University), had some pretty damning testimony, including how the DOE justifies the 1705 Loan Guarantee Program. She even disputed the DOE's argument that "by investing in green technology, it would create up to 5 million green jobs." When in reality, De Rugy continues, "the DOE's own data shows that $16 billion in loans were guaranteed [under the 1705 LGP], and 2378 permanent green jobs were created" –– "that means that for every $6.7 million in taxpayer exposure, ONE job was created!"


Keep in mind that 1705 LGP is not the only DOE loan program to be analyzed –– there are three, and since 2009, the DOE has guaranteed a total of $34.7 billion. As you will see, there are also other government agencies and programs doling out billions more in "green" funds.


General Electric, CEO Jeffrey Immelt, Chair of Obama’s Job Council and the Billions They Raked in Through the 2009 Obama Stimulus Package


Whereas General Electric (GE) is a heavy donor to both Republicans and Democrats, and Immelt himself "plays the role of typical corporate donor who hedges his bets on both sides of the fence," in 2008, GE gave the Obama campaign $529,855, marking them a top Obama donor. Nevertheless, GE is a major player on the clean-energy scene as well as in this green energy scheme. Even The New York Times recognized GE’s “green power,” noting that in 2009, GE lobbied Congress to help expand the “clean-energy subsidy programs, and it now profits from every aspect of the boom in renewable-power plant construction,” including “hundreds of millions in contracts to sell its turbines to wind plants built with public subsidies.” In fact, you'll be "blown away" by the billions of "wind energy grants" that blew out of the stimulus package back in February 2010, of which GE is contracted to at least 26% of them as the "Turbine Manufacturer."

In late 2009, it was reported that GE became "one of the newer smart meter players," and that they "had been working with utility Oklahoma Gas & Electric on a 6,600 smart meter trial, and had procured "a contract with Pepco Holdings (PHI)," which received Smart Grid Investment Grants totaling $168 million. GE also has a big contract with Florida Power and Light," also the recipient of a $200 million stimulus grant.

Yet, this is just the beginning of the GE "green bucks"...

While a recent "news flash" was published by the Republican National Committee, confirming via Recovery.gov that "General Electric received over $1.2 billion worth of stimulus loan guarantees, awards, contracts and grants" (the majority of which were for renewable energy projects), they missed billions more. Two large 1705 loan guarantees that I had outlined in April of this year, as well as a forthcoming $490 million cash grant and a $54.6 million loan from the Federal Railroad Administration (FRA). Add in some smaller government subsidies and awards for a multitude of green projects, programs, and through some of their "green alliances," that I found during my 2011 research, and GE's "green tab" exceeds $3 billion in direct (some indirectly) taxpayer cash, and counting. ;

Let's take a look at GE's two projects from the 1705 Loan Guarantee Program, both of which are included the DOE's risky investment portfolio.

GE sponsored the Caithness Shepherds Flat, and also supplied the project with 338 wind-turbines. On top of the $1.3 billion loan, the Caithness project is set to receive a cash grant of $490 million from the Treasury Department once those turbines start turning.

Later, another close associate of, and big donor to the president invested in Caithness. As uncovered by Peter Schweizer in his book, Throw Them All Out, "Google's CEO at the time, Eric Schmidt, served as an informal advisor to President Obama.” Still, Schmidt, Google Executive Chairman, was an Obama donor in 2008, and since April 2009, is a member of the president's Science and Technology Advisory Council (PCAST). Interestingly, Google’s $814,540 contribution to Obama’s campaign made it the fifth largest donor in 2008. As of late, Google has aimed its "search engines" at green technology, many of which have received government "help" –– BrightSource, Solar City, Telsa Motors, and others, but we’ll stay focused on GE.

The House Oversight, March 2012 investigation reveals internal memos of concern over the fact that the Caithness Shepherds Flat project was receiving “an excessive amount of public subsidy (where grants, tax credits and loan guarantees provided 65% of the funding for the project), and that private parties did not have sufficient ‘skin in the game.’”

Further, it goes on to state, “Four months after the DOE approved the Caithness loan, President Obama named Jeff Immelt, the CEO of GE, as the Chairman of Obama’s Job Council” –– a council stacked with Democratic donors, and several Obama bundlers, both for the 2008 and 2012 campaigns.

However, Immelts’ “special entrée” to the White House started two years prior to that February 2011 "Job Czar" position, as a member of President Obama’s 2009 Economic Recovery Advisory Board (PERAB). Besides Immelt’s direct access to President Obama since 2009, GE was privy to Valerie Jarrett’s September 2009 "Clean Energy Summit," where an array of attendees just so happened to "collectively strike gold" with over $5.3 billion in taxpayer funds from the Obama stimulus.

What's more is that GE personnel sit on the DOE’s Electricity Advisory Committee (EAC) of which “recommendations” from their 2008 and 2009 reports made its way into “the American Recovery and Reinvestment Act of 2009 and are being implemented in DOE policies and programs under the Obama administration.” Others on the EAC roster that were given DOE "green money" are American Electric Power (AEP), Austin Energy, NextEra Energy, CenterPoint Energy, to name a few.

As luck would have it, I've tracked at least five members of President Obama’s Job Council that are connected to firms that have cashed in on the green energyspending spree. Besides Immelt, winners include John Doerr partner at Kleiner Perkins Caufield & Byers, Lewis Hay chairman and chief executive officer of NextEra Energy, Inc., Richard Parsons Chairman of the Board of Citigroup, Inc., and Penny Pritzker (also from the PERAB), whom wears many liberal hats, including a prominent position on Obama’s 2008 National Finance Committee.


As for billionaire Doerr, he too served on the PERAB, and in early 2009 extended his influence with Obama's transition team and leaders in Congress, ultimately shaping what went into the energy section of the 2009 economic stimulus package. Doerr is another big winner of government clean-energy funds through his venture capital firm Kleiner Perkins, where Al Gore is also a partner. Doerr and Gore strenuously campaigned for candidate Obama, including financial donations, and in February 2011, Doerr even hosted a lavish high-profiled "tech-exec dinner" for the president, and these days, is considered "a very big-ticket Obama donor."

Kleiner Perkins is a firm that I began to unravel in 2010, stressing that over 50 percent of their Greentech Portfolio secured all kinds of loans, grants, and special tax breaks –– placing them in an "elite green society;" yet it’s a firm to eventually revisit, because since 2010, they have tripled their "investments" and there is much more to expose.

In a twist of fate, Richard Parsons, is connected to SolarReserve and their $737 million DOE "non-investment" grade loan, of which was covered by my new ally, Marita K. Noon, Executive Director of Energy Makes America Great and columnist at Townhall.com. As I attempt to cover the entire DOE "junk bond" Portfolio, together we will be tackling the Special Seven –– those that are not only part of the DOE's risky investments, but received millions (if not billions) from the 1603 Grant Program, both programs created by the Obama administration through the 2009 stimulus package. These firms also received fast-tracked approval by the Department of the Interior to lease federal lands in a no-bid process, and with little scrutiny over environmental issues. They include Abengoa Solar, BrightSource Energy, First Solar, Nevada Geothermal Power, NextEra Energy Resources, Ormat Nevada, and SolarReserve.

Needless to say, just last year, GE –– along with NextEra Energy (also in the House March 2012 investigation), whose CEO Lewis Hay, is also a member of Obama’s Job Council –– bought the California Desert Sunlight project from First Solar, a project that was the recipient of a $1.5 billion dollar DOE loan. Still, NextEra Energy's Genesis Solar project that received a $681.6 million DOE loan, and First Solar –– another "well-connected" solar company that was "awarded" $3 billion in DOE loan guarantees –– are both part of the Special Seven.

Continue reading at my Green Corruption blog because there is much, much more...General Electric Making “Bank” off Obama's “Green” Stimulus Money; Over $3 Billion and Counting

NOTE: This is a rather lengthy article that includes tons of research –– GE is a huge part of this scandal, and in this piece you will find all kinds of other Obama "meaningful" connections. Plus plenty of GE "green alliances" that snagged their "fair share" of stimulus money.