.
Susan Collins, Not Pulosi,
Is the True Profile in Courage 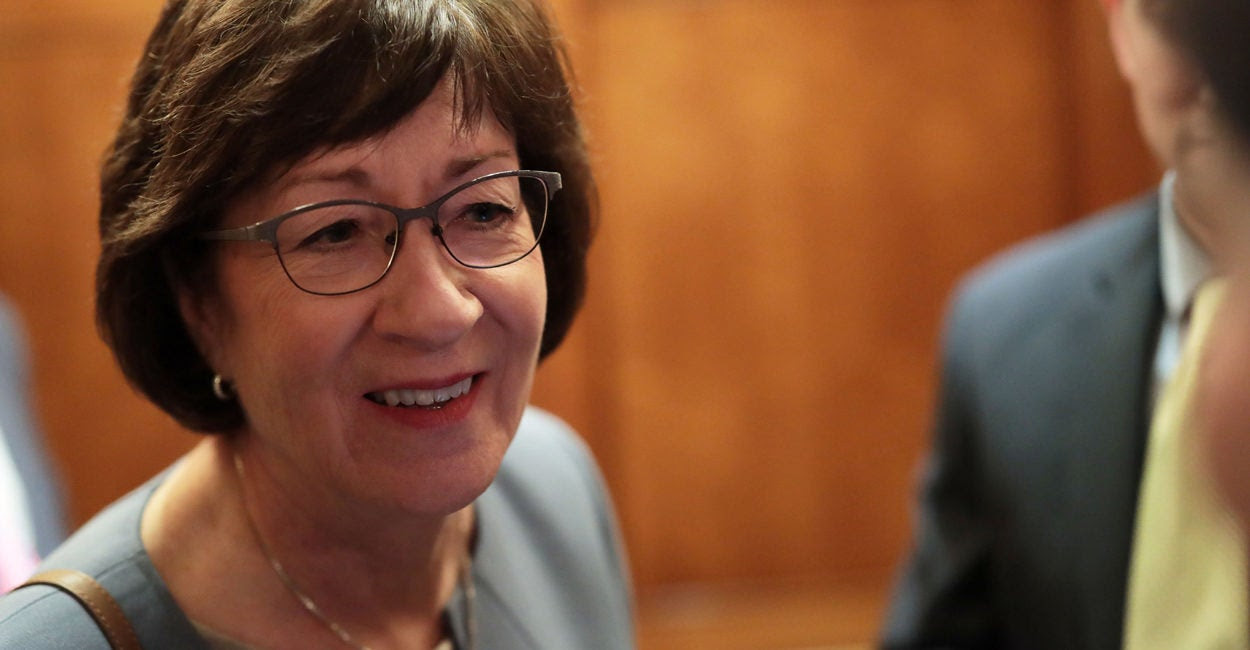 by Peter Parisi
{ dailysignal.com } ~ The John F. Kennedy Library Foundation is set to present its 2019 Profile in Courage Award on May 19 to … drumroll … House Speaker Nancy Pulosi...  It’s not clear what the California Democrat did to deserve the annual award, which claims to recognize public officials whose actions “demonstrate the qualities of politically courageous leadership” and fetes politicians and others “who risk their careers by embracing unpopular positions for the greater good.” It might qualify as “politically courageous” if Pulosi took conservative stances in her ultraliberal San Francisco district, and it’s unclear how she has risked her career as the leader of a far-left House Democratic caucus that largely agrees with her. The selection of Pulosi for the award is all the more perplexing because there was a more obvious—and far more deserving—candidate for this year’s Profile in Courage honor. Sen. Susan Collins, R-Maine, was subjected to threats of sexual assault and even death ahead of the Senate’s vote in early October on the nomination of federal Judge Brett Kavanaugh to the Supreme Court. “There were protests at my home for six weeks in a row, protests at my home here in Washington, death threats, threats of sexual assault against me and my staff,” Collins told Fox News’ Martha MacCallum weeks later in a Dec. 20 interview...   https://www.dailysignal.com/2019/05/16/susan-collins-not-pelosi-is-the-true-profile-in-courage/?utm_source=TDS_Email&utm_medium=email&utm_campaign=MorningBell&mkt_tok=eyJpIjoiTXpNeE1EazNNbVEzTldGaSIsInQiOiIwK1gxalBhVkRtMVlXaE50bnA3aDJHSzV3d1wvRmlKV0h5bWxWaFJ4eTVcL1JhNFNhd0dmcnhvZEtXSkQyaG1EU3BtS0NFaEh3UU5EaENNTW1GcXcwKzkrTW1VcVYrQ0htM2hnUlQrWXhHOEJLeW5hRkQ2bFdFSE42WmtMbWZ5dzhtIn0%3D
.
Back in the News! Dem Chairs’ Secret
Pact to TAKE DOWN the President
by S.Noble
{ independentsentinel.com } ~ We have heard since April that the Democrat chairs in the House formed a secret pact to coordinate their efforts to attack and take down the President... Rep. Jordan repeated that allegation on Fox Business yesterday. Currently, there are 20 Democrat investigations, some are redoing the dirty cop-Mueller probe, and others are looking into the President’s finances and that of his family’s.“When you put it in writing, the coordinated effort amongst the chairmen, to systematically go after the President of the United States, the guy that we all elected President, that’s what we want made public,” Jordan told Dobbs on Fox Business. The chairs have a secret pact in writing as we reported mid-April. The cabal of House Democrats are looking for excuses to impeach the President. Rep. Jordan discovered, and Sara Carter reported in April, that the House Chairs scumbag/mad-Maxine Waters, scumbag-Elijah Cummings, and scumbag-Adam Schiff formed a secret pact, Memos of Understanding (MOU) to target President Trump. In violation of the rules, they did not notify the ranking members. Stalin would be proud of them. It’s how he started out. As his secret police enforcer, Lavrentiy Beria said, “Show me the man and I’ll find you the crime.” This isn’t just harassment, it’s a coup. Rep. Jim Jordan says there is written evidence in the form of a memo of this coordinated effort by the chairman to go after the President. He wants it released and has sent a letter demanding the release of the letter.
https://www.independentsentinel.com/back-in-the-news-dem-chairs-secret-pact-to-take-down-the-president/
VIDEO:  https://www.youtube.com/watch?v=hEqFOjTDP4g
.
Trump Takes a Promising First Step
to Resolving Our Balkanization Crisis 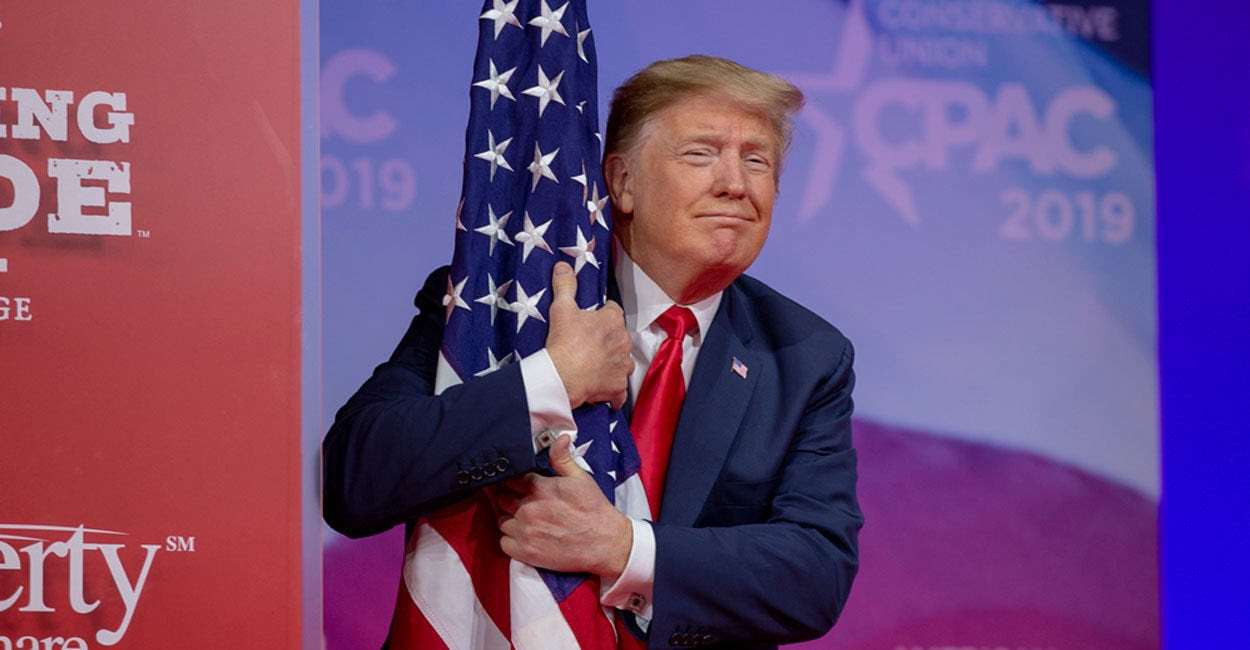 by Mike Gonzalez
{ dailysignal.com } ~ Progressive naysayers will want to denounce immediately President Donald Trump’s call for an immigration approach that “instills the spirit of America into any human heart.”... They should resist the temptation. If they truly love inclusion as much as they say they do, clearly this is the right path. That is not to say that every part of the Americanizing portion in the new immigration policy the president outlined from the Rose Garden on Thursday was airtight. But by adding patriotic assimilation to the policy mix of the new approach, the president took an important first step in the right direction. Trump was returning to a hallowed American tradition that goes back to the Founders, was kept alive by Abraham Lincoln, fed by Progressives such as Theodore Roosevelt and Woodrow Wilson, and was personified by Ronald Reagan. All of them advocated assimilation among immigrants and took pride in America’s unique ability to achieve it. So when Trump opened his remarks by saying, “Out of many people, from many places, we have forged a nation under God,” he was not “breaking norms” as his critics so often charge him with, but returning the country to the norm that has existed for centuries. Only in the past two or three decades have far leftist critical race theorists and street activists attempted to plant the notion that assimilation was anything but desirable or even beautiful. Where the policy misses the mark somewhat is by making a civics test a requirement for an immigration visa. “To promote integration, assimilation, and national unity, future immigrants will be required to learn English and to pass a civics exam prior to admission,” the president said...   https://www.dailysignal.com/2019/05/16/trump-takes-a-promising-first-step-to-resolving-our-balkanization-crisis/?utm_source=TDS_Email&utm_medium=email&utm_campaign=MorningBell&mkt_tok=eyJpIjoiTXpNeE1EazNNbVEzTldGaSIsInQiOiIwK1gxalBhVkRtMVlXaE50bnA3aDJHSzV3d1wvRmlKV0h5bWxWaFJ4eTVcL1JhNFNhd0dmcnhvZEtXSkQyaG1EU3BtS0NFaEh3UU5EaENNTW1GcXcwKzkrTW1VcVYrQ0htM2hnUlQrWXhHOEJLeW5hRkQ2bFdFSE42WmtMbWZ5dzhtIn0%3D
.
The New SAT ‘Adversity Score’
Turns the Idea of Meritocracy Into a Sham 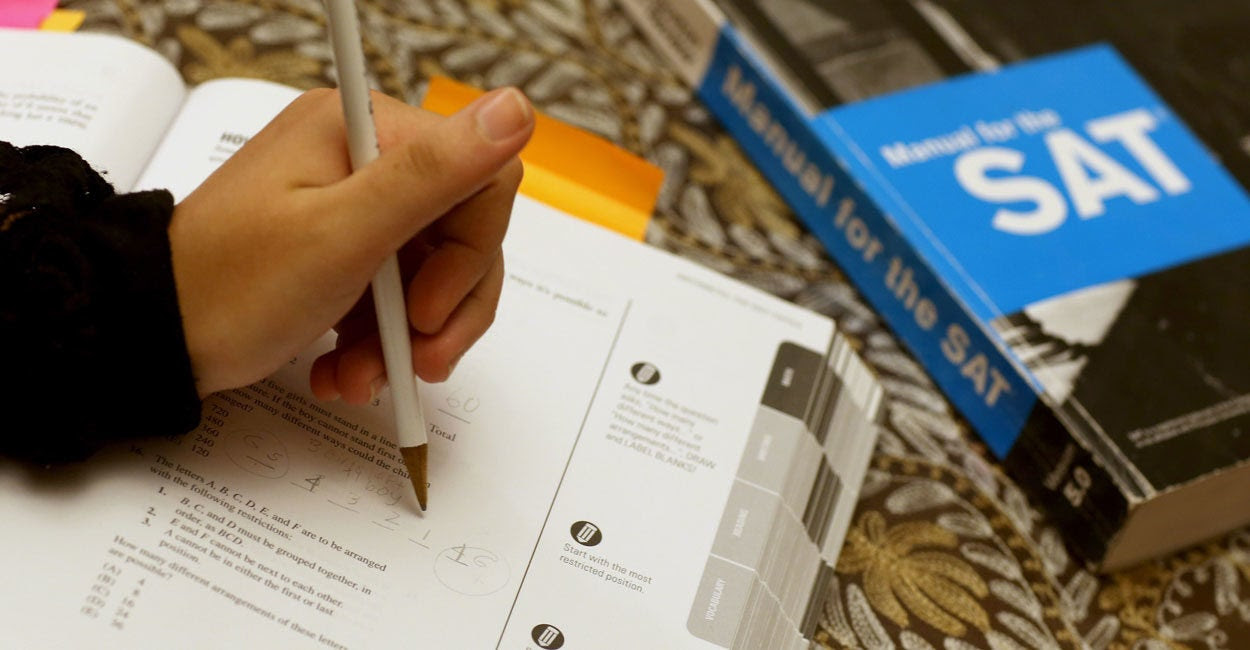 by Jarrett Stepman
{ dailysignal.com } ~ It would be nice to think that high school students can get into a good university based on their abilities or talents, but a proposed change to the SAT shows how the concept of meritocracy has been turned into a sham... The College Board, according to The Wall Street Journal, will now assign an “adversity score” to SAT test takers, “calculated using 15 factors including the crime rate and poverty levels from the student’s high school and neighborhood.” “There are a number of amazing students who may have scored less on the SAT but have accomplished more,” said David Coleman, chief executive of the College Board, according to The Wall Street Journal. “We can’t sit on our hands and ignore the disparities of wealth reflected in the SAT.” The adversity rating has already been used by 50 colleges in 2018, but will eventually extend to significantly more colleges. Every student who takes the SAT will receive this adversity score, according to the Journal, but the students and parents won’t know what it is. Of course, how something as subjective as “adversity” can actually be boiled down to a number for each person is already dubious. Worse, it can be so obviously gamed by both students and school...
https://www.dailysignal.com/2019/05/16/the-new-sat-adversity-score-turns-the-idea-of-meritocracy-into-a-sham/?utm_source=TDS_Email&utm_medium=email&utm_campaign=MorningBell&mkt_tok=eyJpIjoiTXpNeE1EazNNbVEzTldGaSIsInQiOiIwK1gxalBhVkRtMVlXaE50bnA3aDJHSzV3d1wvRmlKV0h5bWxWaFJ4eTVcL1JhNFNhd0dmcnhvZEtXSkQyaG1EU3BtS0NFaEh3UU5EaENNTW1GcXcwKzkrTW1VcVYrQ0htM2hnUlQrWXhHOEJLeW5hRkQ2bFdFSE42WmtMbWZ5dzhtIn0%3D
.
Trump Pulls $1 Billion From California
Over Bullet Train Debacle 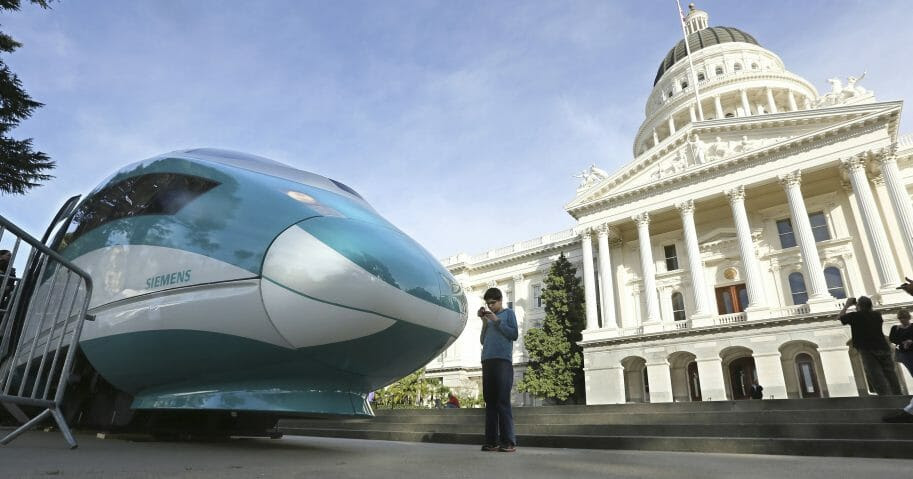 by JOSH HAMMER
{ dailywire.com } ~ On Thursday, the Trump administration audaciously decided to flip a proverbial middle finger at the state of California and its socialite Democratic governor, Gavin Newsom... The middle finger came in the form of Trump's Department of Transportation nixing a whopping $928.6 million in previously loosely agreed-upon federal funding to help assist California's fledgling high-speed rail project.  The Trump administration made good on its threat to cancel nearly $1 billion in funding for California’s troubled high-speed rail project after Gov. Gavin Newsom said he would scale back its scope. In a letter Thursday to the head of the California High Speed Rail Authority, Federal Railroad Administrator Ronald Batory confirmed the move the administration had floated in February, officially terminating the Transportation Department’s agreement to provide an additional $928.6 million to help pay for the project. The withdrawal of the federal dollars calls into question whether California will be able to finish even a shortened high-speed rail line using just its own money. The high-speed rail authority sent a letter in March to the Transportation Department asking it not to follow through on its threat to revoke funding, according to Mr. Batory. The Trump administration’s action is illegal.  Trump administration had already previously funded the California high-speed rail project to the tune of $2.5 billion...   https://www.dailywire.com/news/47327/trump-pulls-1-billion-california-over-bullet-train-josh-hammer
.
.

Harold Hutchison:  Attorney General William Barr has appointed U.S. Attorney John Durham to investigate the origins of the Trump-Russia probe. That’s a good thing, as is the inclusion of the heads of both the CIA (Gina Haspel) and FBI (Christopher Wray), along with Director of National Intelligence Dan Coats. Given that dirty cop-Robert Mueller’s report cleared President Donald Trump of collusion, investigating the investigators is also a very necessary thing. No wonder Democrats are panicking.

Why? Because the considerable resources of the United States intelligence community and federal law-enforcement agencies were turned on the political opponents of those in power before the 2016 election. As Barr put it last month, “Yes, I think spying did occur.” This is the sort of thing we’d expect from the likes of Nicolas Maduro in Venezuela, Recep Tayyip Erdogan in Turkey, and, of course, Vladimir Putin in Russia. In America, such abuse should raise grave concerns … even if the administration had a good reason for doing so, which it clearly didn’t.

Case in point: In 2007, Charles Stimson, a DOD official in George W. Bush’s administration, criticized the Gitmo Bar — a name for the attorneys representing the terrorists detained at Guantanamo Bay — and suggested that clients of those firms should make them choose between representing al-Qaida or corporate retainers. He was run out of office for that “offense,” even though the Gitmo Bar provided al-Qaida with far more than hanoi-Jane Fonda gave the North Vietnamese.

Imagine if the Bush administration had turned the FBI on the Gitmo Bar the way Barack scumbag/liar-nObama’s administration turned the FBI on the Trump campaign. Does anyone think that MSNBC, CNN, The New York Times, and The Washington Post would be giving those investigators the same deference they demanded on dirty cop-Mueller’s behalf? If you believe that, we at The Patriot Post have a bridge in Brooklyn for sale.

We need answers. We needed answers about other problematic actions in the past, like Operation Fast and Furious, the IRS targeting of the Tea Party, and the targeting of journalists Sharyl Attkisson and James Rogan over their reporting, to name a few of scumbag/liar-nObama’s “non-scandals.” Of course, we never got those answers. All we got were whitewashes.

With the end of the dirty cop-Mueller probe, we now need to know what prompted the FBI’s actions before, during, and after the 2016 election. What evidence was used to justify spying on the opposition party’s presidential campaign? Why did investigators choose the techniques they chose? Were the omissions in the FISA applications honest mistakes, or was something more sinister involved? And what was behind the “unmasking” of American citizens caught up in surveillance?

Many conservatives have been understandably skeptical of the FBI’s conduct. If there were honest mistakes, let’s reveal them and make changes so they’re not repeated. And if there were deliberate abuses, let’s punish those responsible.

After all, it’s worth remembering that Donald Trump’s only “crime” was running against — and defeating — scumbag/liar-Hillary Clinton for the presidency of the United States.  ~The Patriot Post