by rickwells.us
{ rickwells.us } ~ One of liar-nObama’s two corrupt Attorneys General, scum-Eric Holder, said in a Wednesday interview... that a “technical” case for obstruction of justice could be made against President Trump. According to “ scum-Eric the withholder,” that’s different from an actual case that anyone would attempt to prosecute. And technically speaking, he’s a lying political hack who’s “technically” afraid of going to prison. On the mainstream propagandist network, MSNBC, scum-Holder took action to protect the crooked liar-nObama regime of which he was a major corrupt player, by attacking President Trump, both in the public information arena, as well as threatening him with the implication of the left taking legal action. In his interview he told host Rachel “51% Female” Maddow that President Trump’s decision to fire the corrupt former FBI Director, James Comey and other actions were a basis for a “possible” case...scum-Holder is full of do-do. https://rickwells.us/obama-holder-trump-technically/
VIDEO:  https://twitter.com/MSNBC/status/961430367440908289/video/1
.
liar-nOBAMA KNEW

by Matthew Vadum
{ frontpagemag.com } ~ Former President liar-nObama wanted “to know everything” the FBI was doing in its investigation into claims that Russia... was interfering in the 2016 election, a new report suggests, raising the specter of a sitting president becoming involved in a plot to rig the 2016 election. It was a year ago the outlines of a Watergate-like conspiracy emerged in which a term-limited Democrat president used the privacy-invading apparatus of the state to spy on a Republican presidential candidate. Watergate differed in that President Nixon didn’t get involved in the plot against the Democratic National Committee until later as an accomplice after the fact. But this new evidence suggests liar-nObama may have been part of a sinister anti-democratic cabal from the beginning...   https://www.frontpagemag.com/fpm/269266/obama-knew-matthew-vadum.
BOMBSHELL: FBI Informant In Uranium
One Scandal Testifies Against
liar-nObama. Here's What He Said.

by RYAN SAAVEDRA
The FBI’s informant in the Uranium One scandal involving the liar-nObama administration gave written testimony... to three congressional committees this week in which he accused the liar-nObama administration of making decisions that directly benefited the Russian government and their goals of gaining geopolitical advantages over the United States. The informant, Douglas Campbell, told congressional investigators on Wednesday that Moscow sent millions of dollars to the U.S. with the expectation that it would benefit the liar-Clintons, while liar-Hillary Clinton "quarterbacked a 'reset' in US-Russian relations" in her role as Secretary of State during the liar-nObama administration, The Hill reported...   https://www.dailywire.com/news/26891/bombshell-fbi-informant-uranium-one-scandal-ryan-saavedra
VIDEO:  https://twitter.com/FoxNews/status/961531408912125953?ref_src=twsrc%5Etfw&ref_url=https%3A%2F%2Fwww.dailywire.com%2Fnews%2F26891%2Fbombshell-fbi-informant-uranium-one-scandal-ryan-saavedra
.
Jeff Sessions Is About To Turn
Robert Mueller’s Investigation Upside Down 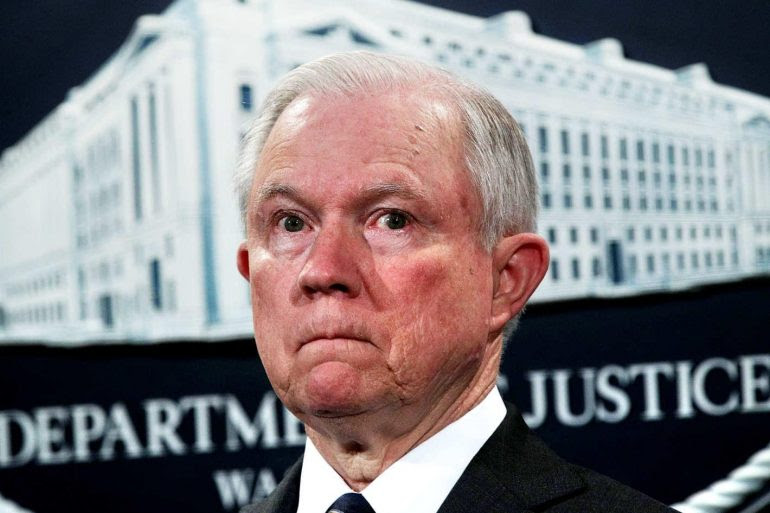 by Andrew West
{ constitution.com } ~ What the liberal media once claimed was a far too cruel nickname in “Crooked liar-Hillary” now seem like a farce... It would as if someone were to describe the amicable, late children’s television icon Fred Rogers as “a tolerable fella” in that neither description comes close to scratching the surface on these two distinctly opposed public figures. Now that liar-Clinton has been forced into a retreat of sorts, having been irrevocably embarrassed by populist President Donald Trump during the 2016 general election, there is more muck being unearthed from beneath her feet than could be found in the Okefenokee Swamp.  Not only has liar-Clinton been implicated in a number of scams to dethrone the otherwise successful commie-Bernie Sanders during the 2016 primaries, but liar-Clinton’s time as Secretary of State under President liar-nObama has been tainted with a sort of rot that only her family’s brand of political shamanism can conjure...Paid millions. https://constitution.com/bombshell-clinton-received-millions-russia-exchange/
.

by Nate Jackson:  Now that the dust has settled from Tuesday night’s release of a less redacted version of a key Senate memo about dossier author Christopher Steele, there are some key things to highlight. This memo compliments the one written by House Intelligence Committee Chairman Devin Nunes that Mark Alexander covered comprehensively Monday. But if anything, the Senate memo, written by Judiciary Committee Chairman Chuck Grassley (R-IA) and Crime and Terrorism Subcommittee Chairman RINO-Lindsey Graham (R-SC), is even more damning.

Grassley and RINO- Graham summarize, “It appears the FBI relied on admittedly uncorroborated information, funded by and obtained for Secretary liar-Clinton’s presidential campaign, in order to conduct surveillance of an associate of the opposing presidential candidate. It did so based on Mr. Steele’s personal credibility and presumably having faith in his process of obtaining the information. But there is substantial evidence suggesting that Mr. Steele materially misled the FBI about a key aspect of his dossier efforts, one which bears on his credibility.”
The memo elaborates on those charges. The senators make public for the first time actual text from the FBI’s FISA application for surveillance of Carter Page, a member of Donald Trump’s campaign team. While Nunes revealed that the FBI used the dossier for that FISA application, the Senate memo indicates the bureau relied “heavily” on Steele’s dossier — as in it comprised the bulk of the application. The memo explains, “The application appears to contain no additional information corroborating the dossier allegations against Mr. Page.” That’s critical: The FBI used the dossier not as a lead for further digging but as self-sufficient evidence, and the court apparently agreed. That’s incredibly weak justification for what ended up being a Fourth Amendment violation.
Also made public is classified FBI testimony before the Senate Judiciary Committee regarding the dossier and FISA application. What do we learn? The FBI did not inform the FISA court that Steele was, by his own account, “desperate” to stop Trump from being elected. According to the Senate’s letter, “The application failed to disclose that the identities of Fusion [GPS founder Glenn] Simpson’s ultimate clients were the liar-Clinton campaign and the DNC [Democratic National Committee].” Thus, Steele’s political motivation — never mind his funding — was deliberately concealed, and thus the court issued a surveillance order based on false information.
The FBI also based its trust in Steele on … its trust in Steele. Investigators considered him credible because he’d given good information previously, leaving them blind to his political bias. Yes, the FBI eventually ended its relationship with Steele after learning some of this, but it was too late. As RINO-Graham said, “You can be an FBI informant. You can be a political operative. But you can’t be both, particularly at the same time.”
Moreover, Steele wasn’t honest, much less credible. Steele lied to the FBI, in part by denying that he was the source for a Yahoo News article about the dossier, when in fact he was the source. That news article was not only used by the FBI as backup for Steele’s dossier, it was cited by the liar- Clinton campaign in attacks on Trump, meaning she was getting political mileage out of the same “intelligence” used by Barack liar-nObama’s law enforcement arm to surveil Trump’s campaign.
And Steele leaked like a sieve, speaking also to The Washington Post, The New York Times, CNN, The New Yorker and maybe other Leftmedia outlets. Once he was leaking, he could be manipulated by bad actors feeding him bad information. Garbage in, garbage out.
But wait; there’s more. The Wall Street Journal writes, “The Grassley/RINO-Graham referral also drops the stunning news that Mr. Steele received at least some of the information for his dossier from the liar-nObama State Department. The letter redacts the names involved. But the press is now reporting, and our sources confirm, that one of the generators of this information was none other than [ liar-Hillary hatchet man] Sidney Blumenthal.” In other words, liar-Hillary’s cronies at State were backfilling information she was paying for and using to discredit her opponent.
Bottom line: It’s time to declassify and release all four FISA applications (the original and three renewals) for surveilling Carter Page. The Senate memo sheds even more light than Nunes’ did on FBI corruption, but more information and transparency is needed.
~The Patriot Post
https://patriotpost.us/articles/54017-bombshell-senate-memo-on-fbi-corruption