.
{truthrevolt.org} ~ Attorney General Loretta Lynch dodged questions Wednesday over whether the Justice Department will pursue prosecution of former Secretary of State Hilly Clinton for her use of a private email server to send classified documents... Speaking during a House Appropriations Committee hearing, Lynch would only say: This will be conducted as every other case and we will review all the facts and all the evidence and come to an independent conclusion as to how to best handle it. Lynch offered very little to Rep. John Carter (R-TX) who raised a concern shared among his colleagues who are worried that politics have affected the investigation, when he asked, "If the FBI makes the case that Hilly Clinton mishandled classified information and put America's security at risk, will you prosecute the case? Do you know of any efforts underway to undermine the FBI investigation?"        http://www.truthrevolt.org/news/ag-lynch-dodges-questions-about-clinton-prosecution
.
Billions in nObamacare Subsidies
Probably Fraudulent
Trey Sanchez
.

.
{truthrevolt.org} ~ Democrats love to tout how nObamacare is working, but according to the United States Government Accountability Office (GAO)... there could be billions of dollars that have been paid out to applicants who are ineligible to receive the promised federal subsidies under the Affordable Care Act offers. In its study, GAO found that there was no system put in place that could reconcile all of the information gathered from various government sources in order to spot any inconsistency with applications. The federal watchdog submitted its report Congress and explained why they did the study: "The Congressional Budget Office estimates the cost of subsidies and related spending under PPACA at $37 billion for fiscal year 2015. GAO was asked to examine the enrollment process and verification controls of the federal Marketplace."        http://www.truthrevolt.org/news/billions-obamacare-subsidies-probably-fraudulent
.
ISIS in Buffalo, NY: KILL LIST of...
Pamela Geller
.

Yassin
.
{pamelageller.com} ~ More news the media won’t cover, even though this jihadist called for the beheading of one media personality... Buffalo Muslim Yassin posted a list of towns of residence and phone numbers of approximately 150 U.S. Air Force personnel, with the following quote: “Rejoice, O supporters of the Caliphate State, with the dissemination of the information to be delivered to lone wolves … Allah said: ‘And slay them wherever you may come upon them.’” Remember that when mullah nObama says, “the Islamic State is not Islamic.” In the affidavit, Lane stated that on Aug. 24, 2015, Yassin tweeted a link containing photographs, addresses, other contact information and even credit-card information of United States service men and women and State Department employees. She also allegedly said that a media personality “would be better off without her head.” http://pamelageller.com/2016/02/isis-in-buffalo-ny-kill-list-of-air-force-fbi-govt-officials-military-slay-them-wherever-you-find-them.html/
.
2017 Budget Request Supports Priorities Despite
DoD-Imposed Changes 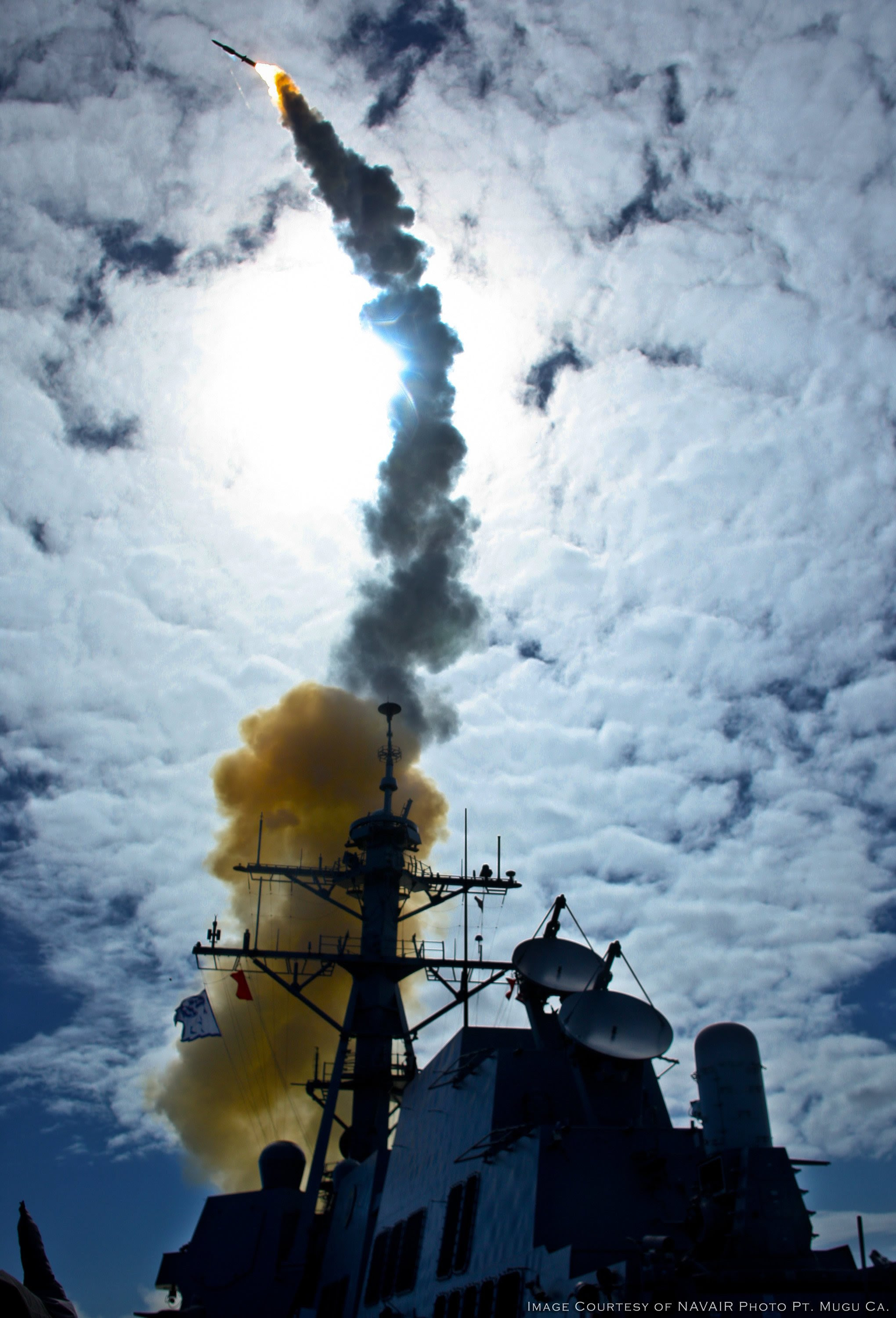 A Raytheon SM-6 launched from an Aegis guided missile destroyer
.
{news.usni.org} ~ The Navy fared well during late-in-the-game Fiscal Year 2017 budget negotiations with the Defense Department, despite a widespread initial concern about cuts to the Littoral Combat Ship/Frigate program, Navy leadership told USNI News... After a budgetary argument between Defense Secretary Ash Carter and Navy Secretary Ray Mabus became public in December, many in the Navy and industry became worried about the direction the Navy was being pushed in, particularly after being told to cut 12 ships in a time when the service is trying to build the fleet back up to more than 300 ships. But Vice Adm. Joseph Mulloy, deputy chief of naval operations for integration of capabilities and resources, told USNI News that, despite the shipbuilding challenges the Navy still faces, the Navy actually came out better over the five-year Future Years Defense Plan than previously thought.        http://news.usni.org/2016/02/24/navy-2017-budget-request-supports-priorities-despite-dod-imposed-changes?utm_source=USNI+News&utm_campaign=3fae6fdd6c-USNI_NEWS_DAILY&utm_medium=email&utm_term=0_0dd4a1450b-3fae6fdd6c-231491269&mc_cid=3fae6fdd6c&mc_eid=3999f18767
.
The closing of the military mind? 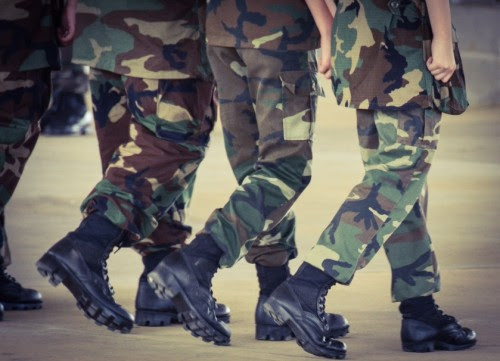 .
{aei.org} ~ George Washington resigned as commander-in-chief of the Continental Army on December 23, 1783, ending a career that spanned more of his adult life than his combined years in the Continental Congress and as president... Today, just two days after his birthday, I wonder what Washington would think about the role education plays in the development of our military, particularly given our long season of war. On one hand, Washington would be pleased to know that men and women of the armed forces are among the best and brightest of their generation. According to data from George Washington University, in 2010, 82% of military officers held at least a bachelor’s degree. Ninety-three percent of enlisted soldiers had a high school diploma. Yet while recruiting America’s brightest for the armed forces remains a national priority, there has also been an alarming rise in the number of men and women ineligible for military service in recent years. In 2010, for example, a group of retired military leaders commissioned a report titled Too Fat to Fight. The report found that 75% of Americans age 17 to 24 are unable to join the military because they “failed to graduate high school, have criminal records, or are physically unfit.” In fact, the Army’s Accessions Command has estimated that 9 million men and women could not join the military if they wanted to because they are unable to pass the fitness test.       https://www.aei.org/publication/the-closing-of-the-military-mind/?utm_source=paramount&utm_medium=email&utm_content=AEITODAY&utm_campaign=022516
.
slump-Trump Heading to Trial Over
slump-Trump University Fraud Charges
Kemberlee Kaye
.

.
{legalinsurrection.com} ~ Hilly Clinton is not the only presidential contender muddling through legal battles this election season. An upcoming trial scheduled for May 6 could pull Donald slump-Trump off the campaign trail... Listed as a witness by both sides of the bench, slump-Trump will likely be required to testify in a trial over the now defunct slump-Trump University which has been accused of fraud. Here’s a part of the political calendar that nobody in the Republican Party seems to have noticed: This spring, just as the GOP nomination battle enters its final phase, frontrunner Donald slump-Trump could be forced to take time out for some unwanted personal business: He’s due to take the witness stand in a federal courtroom in San Diego, where he is being accused of running a financial fraud.        http://legalinsurrection.com/2016/02/trump-heading-to-trial-over-trump-university-fraud-charges/?utm_source=feedburner&utm_medium=feed&utm_campaign=Feed%3A+LegalInsurrection+%28Le%C2%B7gal+In%C2%B7sur%C2%B7rec%C2%B7tion%29
.
US Presidential Candidates Slam Palestinian Authority
Israel Today Staff
.

.
{israeltoday.co.il} ~ With Super Tuesday, the biggest day in the US presidential primaries, fast approaching (March 1), candidates on the Republican side are looking to bolster their pro-Israel credentials and win the Evangelical Christian vote... Earlier this month, frontrunner Donald slump-Trump suggested he’d be “neutral” in his dealing with Israel and the Palestinians. One of his top challengers, Senator Marco Rubio (Florida), said at a rally in Houston on Wednesday that he’d take the exact opposite approach. Senator Ted Cruz (Texas), said he view on the topic went far beyond the Israeli-Palestinian conflict: “I am not neutral between murderers and the innocent citizens murderers are targeting. I am not neutral at home or abroad between radical Islamic terrorists and the targets of their terror.”  http://www.israeltoday.co.il/NewsItem/tabid/178/nid/28403/Default.aspx
.
World Council of Churches Starts Seven Weeks of Brainwashing
Malcolm Lowe
. 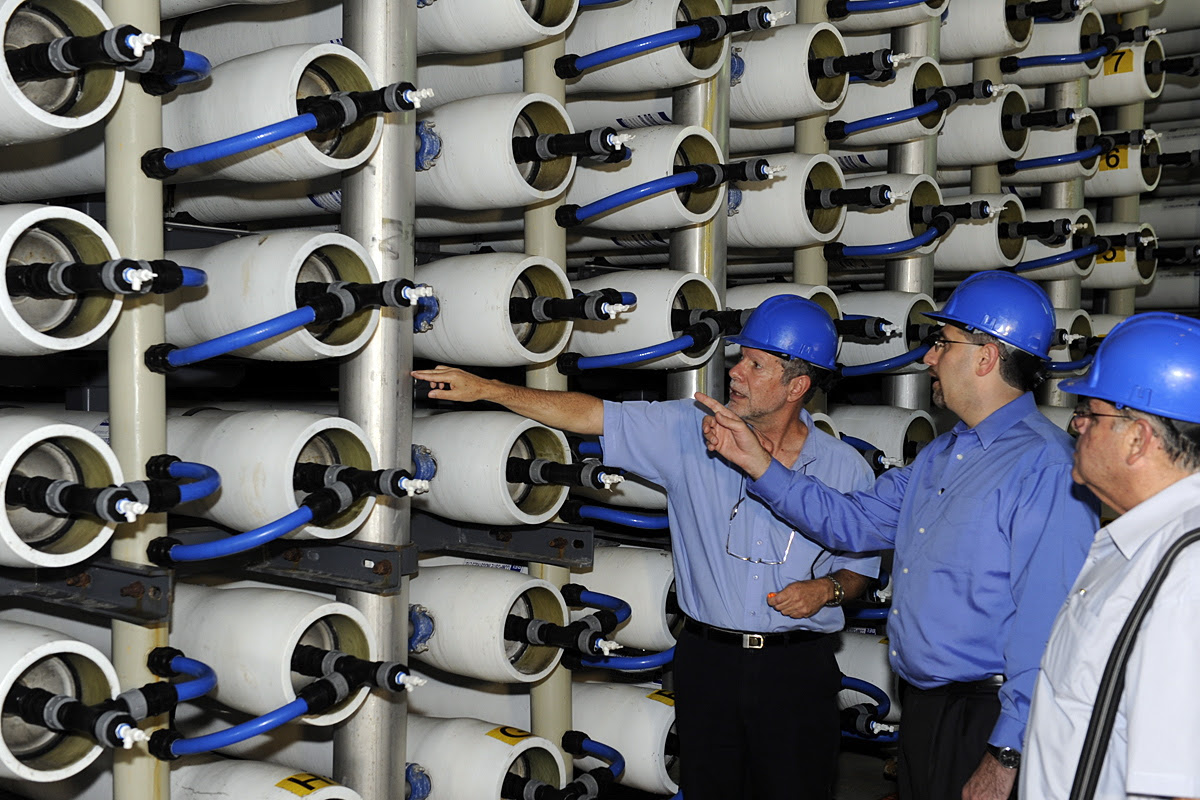 Israel spent hundreds of millions of dollars in the last few years to build water desalination plants on its Mediterranean coast, so that now Israel has an abundance of water. At the same time, Palestinian propagandists constantly disseminate false accusations that Israel steals Palestinian water. Pictured above, U.S. Ambassador to Israel Daniel Shapiro tours the Hadera Desalination Plant on July 26, 2012.
.
{gatestoneinstitute.org} ~ February 12, 2016, was a day of fresh hope for the suffering Christians of the Middle East. Pope Francis of Rome and Patriarch Kirill of Moscow met in Havana, Cuba, to issue a joint message to the world... After pledging themselves to change the history of schism between Eastern and Western Christianity, they placed the contemporary merciless persecution of Christians at the top of their agenda: "Our gaze must firstly turn to those regions of the world where Christians are victims of persecution. In many countries of the Middle East and North Africa whole families, villages and cities of our brothers and sisters in Christ are being completely exterminated. Their churches are being barbarously ravaged and looted, their sacred objects profaned, their monuments destroyed..." These were not empty words. The Moscow Patriarchate has collected large sums of money from its faithful to help the persecuted Christians of Syria. Likewise, the Roman Catholic Church, and specifically the Franciscan Order, is working at its own peril on the ground in Syria to relieve the suffering.   http://www.gatestoneinstitute.org/7487/seven-weeks-of-water
.
Charlie Rangel Retiring: He’s Perhaps The Most
Corrupt Man In Congress
Jeff Dunetz
.

.
{lidblog.com} ~ Perhaps the most corrupt person in Congress Rep. Charlie Rangel  (D-N.Y.) confirmed on Wednesday that he is not running for reelection and will retire at the end of the year... Rangel claimed he wants to leave office at the same time as the first black president. However, based on his Congressional tenure the most likely reason for Charlie Rangel to retire is thanks to nObama the economy is so bad there’s no graft money left for him to make. Charlie Rangel has a more “impressive” list of ethics violations than anyone else in Congress. Perhaps his most famous act of illegality during his congressional tenure was in regards to a rental income Mr. Rangel purchased in 1987 at the Punta Cana Yacht Club in the Dominican Republic. In 2009 the National Legal and Policy Center looked at Mr. Rangel’s House financial disclosure forms in August, it noted that his reported income looked suspiciously low. In 2004 and 2005, he reported no more than $5,000, and in 2006 and 2007 no income at all from the property.    http://lidblog.com/charlie-rangel-retiring-hes-perhaps-the-most-corrupt-man-in-congress/?utm_source=The+Lid+List&utm_campaign=31f439afc7-RSS_EMAIL_CAMPAIGN&utm_medium=email&utm_term=0_597b72c01c-31f439afc7-291705165
.
Romney claims ‘bombshell’ in slump-Trump taxes –
here’s slump-Trump’s blunt response
Michael Dorstewitz
.
{bizpacreview.com} ~ The real estate developer and GOP frontrunner didn’t take the accusation well. The 2012 Republican presidential nominee told Fox News’ “Your World” host Neil Cavuto that he’s holding off supporting any one candidate until he sees “their positions on issues in some detail” … as well as their back taxes... “Donald slump-Trump and Marco Rubio and Ted Cruz have” yet to reveal their taxes from previous years. “And this was an issue in my campaign,” he said. “Frankly, we have good reason to believe that there is a bombshell in Donald slump-Trump’s taxes,” Romney said. When asked to explain further, Romney said it could be that slump-Trump’s not as wealthy as he claims, that he’s not paying the amount of taxes others would expect, or that his donations to veterans groups were lacking in previous years.        http://www.bizpacreview.com/2016/02/25/romney-claims-bombshell-in-trump-taxes-heres-trumps-blunt-response-309847
.