by STEVEN GREENHUT
{ spectator.org } ~ California’s government has set itself up as Ground Zero for the resistance... epitomized by the 29 lawsuits the state has filed or joined with other states since the beginning of the Trump administration. Most of these cases are symbolic and serve mainly to energize the Democratic base. They make for great political theater and also offer an unusual narrative as left-wing California becomes the new redoubt of states’ rights. The courts will sort through that mess, but there’s a far more noxious way that California’s union-dominated Legislature is resisting changes at the federal level. In particular, the U.S. Supreme Court is soon expected to issue a ruling in the Janus v. the American Federation of State, County and Municipal Employees case. Given the makeup of the court, virtually all court watchers expect the high court to toss a law that requires public employees to pay union dues. This is a fabulous likely development, and could be the president’s most significant achievement given that Justice Neil Gorsuch is the swing vote. Since the 1977 Abood decision, the court allowed workers to opt out of the portion of union dues that is used for direct political purposes, but not for collective bargaining.  Janus’s plaintiffs argue, however, that all dues payments — even those related to contract negotiations — are inherently political. This surely is true, given that union contracts affect policy issues such as public spending, pension debt, and tenure...
https://spectator.org/california-targets-supreme-court/?utm_source=American+Spectator+Emails&utm_campaign=be5fff10a5-EMAIL_CAMPAIGN_2018_06_21_06_48&utm_medium=email&utm_term=0_797a38d487-be5fff10a5-104608113
.
Former Secret Service Agent Slaps Lawsuit
on liar-Clintons, Podesta and More

by Virginia Kruta
{ dailycaller.com } ~ Former Secret Service Agent Gary J. Byrne, an outspoken critic of the liar-Clintons since he left the White House and their employ... has filed a RICO lawsuit against former President liar-Bill Clinton, former Secretary of State liar-Hillary Clinton and a list of others. The nature of the suit, according to the filed documents, is “racketeer-influenced and corrupt organizations.” In addition to the liar- Clintons, Byrne names a number of liar-Clinton associates and supporters as defendants. Byrne also names fellow veteran Secret Service Agent and CNN Law Enforcement Analyst Jonathan Wackrow as a defendant in the suit...
http://dailycaller.com/2018/06/21/secret-service-lawsuit-clinton/
.
Illegal Immigration, Internment Camps, and Useful Idiots

by DAVID CATRON
{ spectator.org } ~The Bush family has a famously adversarial relationship with English. It became clear this week that at least one of them is also illiterate where U.S. history and immigration policy are concerned... This was demonstrated when former First Lady Laura Bush took to the pages of the Washington Post to denounce President Trump for enforcing a statute signed into law by her own husband, George W. Bush. Even worse, she compared the HHS facilities where the children of illegal immigrants are briefly housed to the infamous internment camps where Democrat icon FDR imprisoned 110,000 American citizens of Japanese descent. This comparison not only played into the hands of the very Democrats and partisan journalists who remorselessly savaged both her and her husband for eight solid years, it is wildly inaccurate. Mrs. Bush clearly knows very little about the plight of children caught up in the illegal immigration crisis, and even less about the internment camps she so glibly evoked. It’s blindingly obvious that she has been suckered by the propaganda relentlessly pumped out by the “news” media, completely taken in by their lurid images of wailing children and “cruel” DHS officials. Laura Bush has thus become just another useful idiot...Laura Bush needs a remedial course in history and immigration policy.
https://spectator.org/illegal-immigration-internment-camps-and-useful-idiots/?utm_source=American+Spectator+Emails&utm_campaign=be5fff10a5-EMAIL_CAMPAIGN_2018_06_21_06_48&utm_medium=email&utm_term=0_797a38d487-be5fff10a5-104608113
.
FBI Has Not Yet Destroyed liar-Clinton Aides’ Laptops 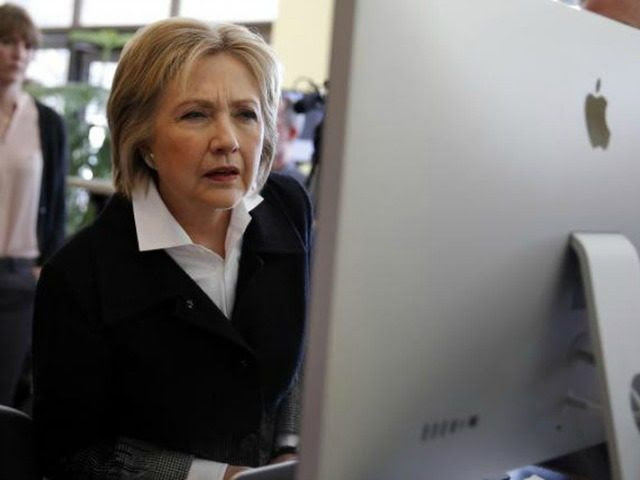 by Aaron Klein
{ breitbart.com } ~ Contrary to widespread reports, the FBI did not destroy any of the evidence it collected in its investigation of liar-Hillary Clinton’s email probe... including the laptops of former liar-Clinton chief of staff Cheryl Mills and ex-campaign staffer Heather Samuelson, according to the recently released report by the Justice Department’s internal watchdog. In 2016, numerous news media reports cited sources saying that as part of immunity deals concluded with Mills and Samuelson, the FBI had agreed to destroy their laptops after the conclusion of its investigation because the devices likely contained classified material. The 500-plus page report authored by the Justice Department’s Office of the Inspector General cites consent agreements for obtaining the laptops as stating that the evidence would ultimately be destroyed. The consent agreements provided: “As soon as the investigation is completed, and to the extent consistent with all FBI policies and applicable laws, including the Federal Records Act, the FBI will dispose of the Device and any printed or electronic materials resulting from your search.”...   http://www.breitbart.com/big-government/2018/06/20/ig-report-fbi-has-not-yet-destroyed-clinton-aides-laptops/
.
The Bombshell IG Report on the liar-Clinton Email Investigation
The Looming Threat from China
by crtv.com
{ crtv.com } ~ The shocking DOJ inspector general's report is a smoking gun, conclusions from the Trump-Kim Singapore summit, and the global military, economic, and cyber threat from China.
VIDEO:  https://www.crtv.com/video/ep466--the-bombshell-ig-report-on-the-clinton-email-investigation--the-looming-threat-from-china
.

SPLC Finally Gets a Taste of Its Own Medicine

by Jordan Candler:  In what amounts to a wholesale betrayal of its early work, the Southern Poverty Law Center (SPLC) has morphed into a racial nemesis. It regularly stokes resentment with unnecessary and empty charges of discrimination and hate. Quilliam, which is headquartered in the UK and bills itself as “the world’s first counter-extremism organisation” with an emphasis on “promoting pluralism and inspiring change,” is just one of many groups that has been targeted by the hate-hustling SPLC.

Quilliam founder Maajid Nawaz, an Islamic reformist, was highlighted in the SPLC’s “Field Guide to Anti-Muslim Extremists” a few years ago. In response, a lawsuit was filed by Quilliam, the outcome of which was revealed this week. According to a Quilliam press release, “The Southern Poverty Law Center, Inc. has apologized to Quilliam and its founder Maajid Nawaz for wrongly naming them in its controversial Field Guide to Anti-Muslim Extremists.” The press release adds, “The SPLC also agreed to pay a $3.375 million settlement, which Quilliam and Nawaz intend to use to fund work fighting anti-Muslim bigotry and Islamist extremism.”
Of course, the $3.75 million figure is chump change relative to the SPLC’s $432.7 million endowment. It does, however, hopefully send a signal. How many more people and organizations stand on equally solid legal grounds to sue? Many, for sure. And a massive retaliation could theoretically bankrupt SPLC if litigation wasn’t so expensive. Sadly, money, not legitimacy, is at the heart of SPLC’s modern-day mission. As columnist Dennis Prager  writes, “Any organization that labels Ayaan Hirsi Ali — the extraordinary Somali-American woman who devotes her life to fighting for oppressed women, especially in the Islamic world — an ‘extremist,’ as the SPLC has done, is not a moral organization.” It is, for all intents and purposes, the Southern Poverty Lies Center.   ~The Patriot Post
https://patriotpost.us/articles/56642?mailing_id=3557&utm_medium=email&utm_source=pp.email.3557&utm_campaign=snapshot&utm_content=body