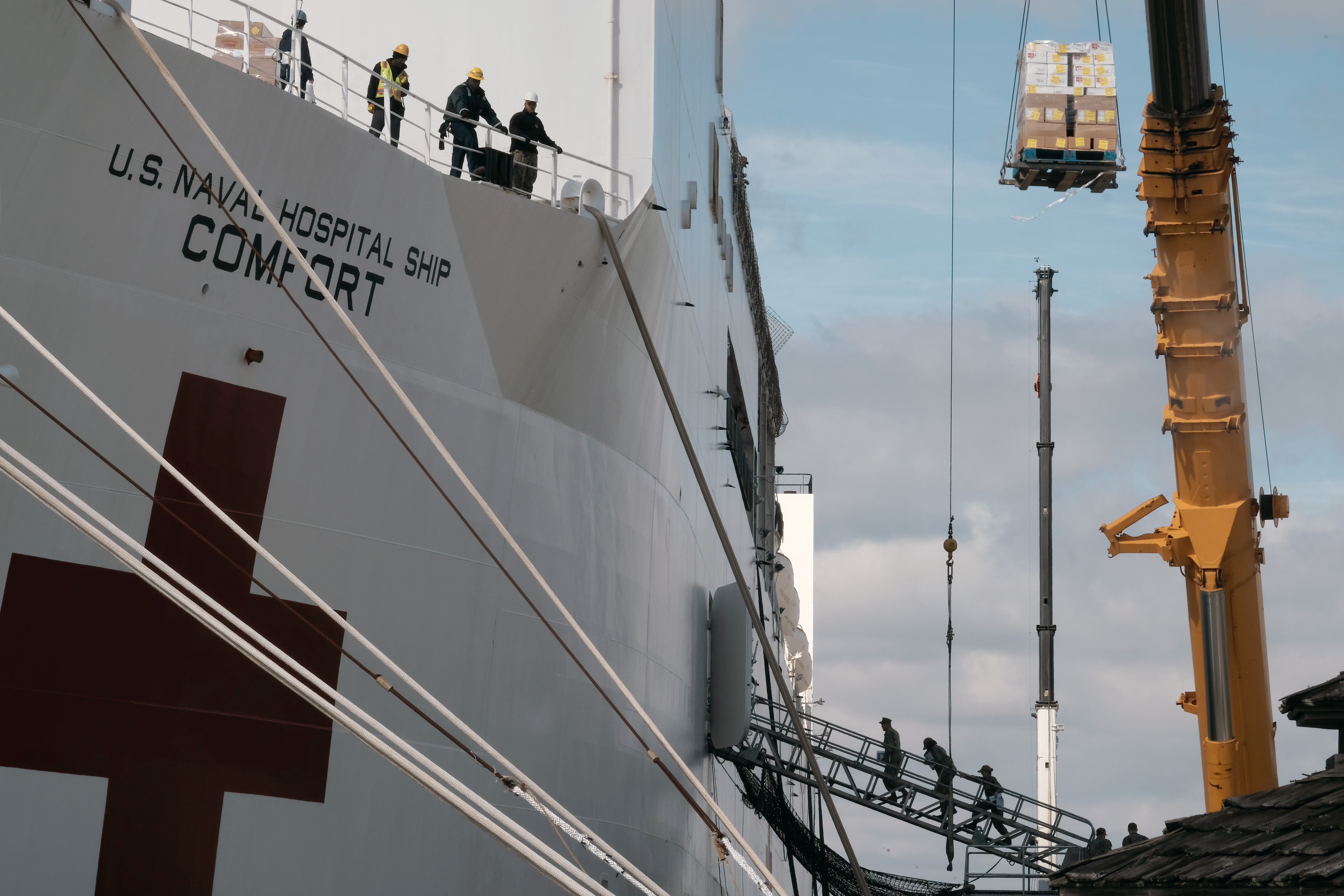 By Megan Eckstein
{ news.usni.org } ~ Hospital ship USNS Comfort (T-AH-20) will leave for New York City on Saturday, with President Donald Trump and Acting Secretary of the Navy Thomas Modly on hand to see off the ship from Naval Station Norfolk, Va. ...Trump announced today he would travel to Norfolk on Saturday “to bid bon voyage to the hospital ship USNS Comfort (T-AH-20) as it leaves for New York City to the frontlines of the COVID-19 virus response. The USNS Comfort will sail well ahead of its originally scheduled departure time to answer America’s call to battle against the global pandemic here at home,” reads a White House news release. Earlier in the day, Modly said in a Pentagon press briefing that “we’ve accelerated the plan for Comfort. We had originally been looking at April 3, but in all likelihood she’s going to be getting underway this weekend. So hopefully she’ll be there in New York by the early part of next week.” Modly said at the briefing that he would visit the ship before it left to support the American city hardest hit by the COVID-19 pandemic, but he did not specify exactly which day he would visit or the ship would depart. Asked at the briefing when Comfort would arrive at New York City Harbor, Modly said, “it will all depend on her transit time and how well she’s functioning on the route up there.” The hospital ship, a converted San Clemente-class super tanker that has provided global medical support under the Military Sealift Command for 33 years, was undergoing maintenance work in Norfolk when Trump announced the ship would be deployed to support New York’s COVID-19 outbreak. Comfort will not take on infected patients but will rather care for patients with other needs – emergency surgeries, trauma care and more – to free up beds and doctors at New York hospitals so they can deal with the virus. USNI News reported that major maintenance actions were accelerated  and other minor work was deferred to allow for the ship to be buttoned up, staffed and supplied in time for this weekend’s deployment. Comfort’s sister ship, USNS Mercy (T-AH-19), departed San Diego on Monday and should pull into Los Angeles tomorrow, after at-sea training and ballasting this week. The White House statement adds that “over 1,200 medical personnel and critical supplies will be onboard the vessel. They will bring to bear the skills, care, and compassion needed to wage this fight against an invisible enemy. These doctors, nurses, anesthesiologists, x-ray technicians, orderlies, and other medical staff will augment and support New York City’s medical community and conserve hospital capacity by treating some non-COVID-19 patients aboard the USNS Comfort.”   https://news.usni.org/2020/03/26/usns-comfort-departs-for-new-york-on-saturday-with-trump-modly-in-attendance?utm_source=USNI+News&utm_campaign=1dbeb20294-USNI_NEWS_DAILY&utm_medium=email&utm_term=0_0dd4a1450b-1dbeb20294-231491269&mc_cid=1dbeb20294&mc_eid=3999f18767
.
Coronavirus: The European Union Unravels 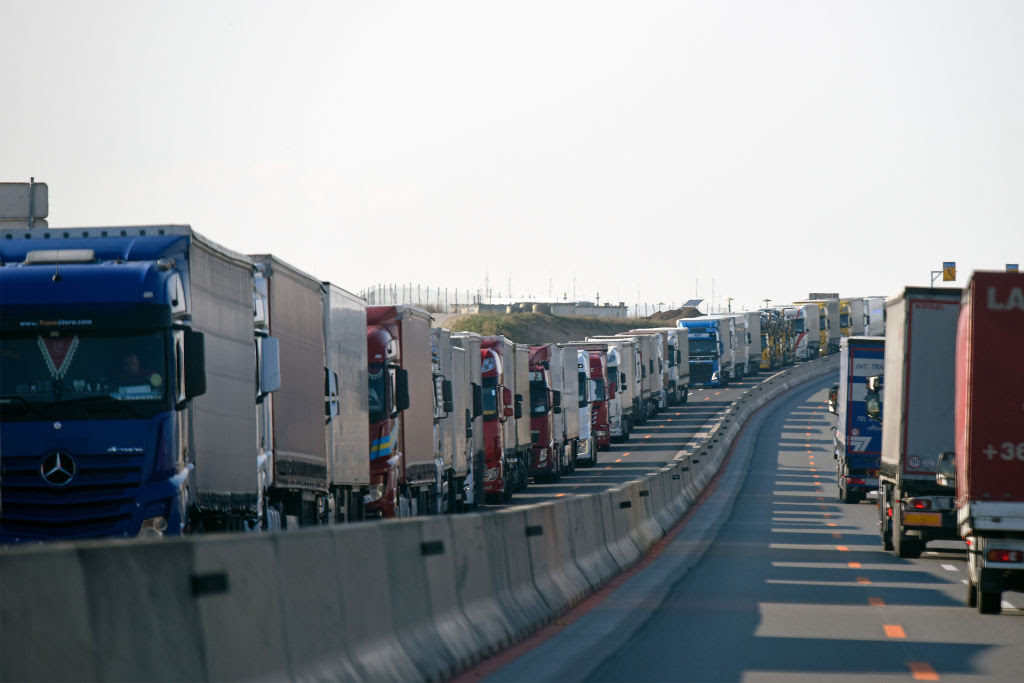 by Soeren Kern
{ gatestoneinstitute.org } ~ As the coronavirus pandemic rages through Europe — where more than 250,000 people have now been diagnosed with Coronavirus Disease 2019 (COVID-19) and 15,000 have died... the foundational pillars of the European Union are crumbling one by one. Faced with an existential threat, EU member states, far from joining together to confront the pandemic as a unified bloc, instinctively are returning to pursuing the national interest. After years of criticizing U.S. President Donald J. Trump for pushing an "America First" policy, European leaders are reverting to the very nationalism they have publicly claimed to despise. Ever since the threat posed by coronavirus came into focus, Europeans have displayed precious little of the high-minded multilateral solidarity that for decades has been sold to the rest of the world as a bedrock of European unity. The EU's unique brand of soft power, said to be a model for a post-national world order, has been shown to be an empty fiction. In recent weeks, EU member states have closed their borders, banned exports of critical supplies and withheld humanitarian aid. The European Central Bank, the guarantor of the European single currency, has treated with unparalleled disdain the eurozone's third-largest economy, Italy, in its singular hour of need. The member states worst affected by the pandemic — Italy and Spain — have been left by the other member states to fend for themselves. The seeds of the European Union were planted in the ashes of the Second World War. In May 1949, Robert Schuman, one of the EU's founding fathers, boldly announced the creation of new world system: "We are carrying out a great experiment, the fulfillment of the same recurrent dream that for ten centuries has revisited the peoples of Europe: creating between them an organization putting an end to war and guaranteeing an eternal peace."...
https://www.gatestoneinstitute.org/15803/coronavirus-european-union-unravels
.
Democrats Discover Border Security – Rhode
Island Governor Orders National Guard
Checkpoints To Protect Against New Yorkers

by sundance
{ theconservativetreehouse.com } ~ Apparently democrat governors are discovering that border security might be important after all…. at least when it comes to quarantining pesky undesirables.  Hypocrisy, thy name is:Yes America, Democrat governors are now placing their national guard troops at the borders to question travelers about their origination… “papers please.” Governor Gina Raimondo announced. Starting immediately, anyone coming into the state from New York state will be mandated to self-quarantine for 14 days, the governor said. “No matter how you come to Rhode Island – bus, car, train, plane – you are ordered to quarantine for 14 days,” Raimondo said. “In my judgement this is the most prudent form of action in light of the crisis.” Members of the National Guard will be stationed at train and bus stations to gather the contact information of anyone coming in from New York. In addition, the Rhode Island State Police will station troopers at the state border to flag down vehicles with New York license plates. The information collected will be used only for contact tracing by the Rhode Island Department of Health, Raimondo said. “This is different. This is unusual. This is radical,” Raimondo said. “I don’t want anyone to panic. If anything, Rhode Islanders should breathe a sigh of relief. We are doing things to keep ourselves safe.”...   https://theconservativetreehouse.com/2020/03/26/democrats-discover-border-security-rhode-island-governor-orders-national-guard-checkpoints-to-protect-against-new-yorkers/
.
Senate Stimulus Bill Contains
Nothing for Climate Advocates

by Jennifer A Dlouhy & Leslie Kaufman
{ news.bloombergenvironment.com } ~ There was hope among some climate activists in the U.S. that the federal stimulus to address Covid-19 might be the moment to both heal the economy and advance a long-overdue transition to clean energy... Whatever they’d envisioned, the $2 trillion bill agreed to by the Senate in the wee hours of Wednesday morning wasn’t it. As congressional leaders assembled the spending bill, the push for clean energy drew fierce opposition from Senate Majority Leader Mitch McConnell and conservative critics, who accused Democrats of trying to exploit the urgent need for coronavirus relief to foist an environmental agenda on a wounded country. “Some folks in Congress and in other parts of Washington, D.C. are suggesting this is a bunch of liberals angling for the Green New Deal, and these are coastal elites that just want to pad their investments in clean energy,” says Bob Keefe, executive director of Environmental Entrepreneurs, or E2, a nonpartisan group of business leaders and investors. “It’s not.” Most people in the clean energy sector are “boot strap-and-jeans guys,” Keefe says. “These are everyday Americans who are struggling.” Here’s where stimulus negotiations currently stand. The wind and solar industry asked for extension of tax credits and other supportive provisions. They were cut out entirely. Solar power lobbyists have warned that half the industry’s jobs are at risk as a result of the pandemic. Some solar panels are stranded in other countries, and even when supplies are on hand, lockdown orders are preventing workers from installing panels. Where oil refineries are generally exempt from shelter-in-place requirements, the waiver doesn’t extend to all renewable energy ventures. Wind developers are racing to get projects in service so they don’t lose some of the value of the renewable energy tax credits that will start being phased out for turbines next year. Colorado-based Scout Clean Energy, for instance, is racing to finish construction on a 200-megawatt project in South Dakota. At the same time, it’s seeking to renegotiate power-purchase agreements in anticipation that the work might not be done in time to claim the full production tax credit, says chief executive Michael Rucker...
https://news.bloombergenvironment.com/environment-and-energy/senate-stimulus-bill-contains-nothing-for-climate-advocates?mc_cid=74c3f11a27&mc_eid=e6ad862261
.
Will Wasteful Provisions in Coronavirus Relief Package Come Back to Haunt Congress? 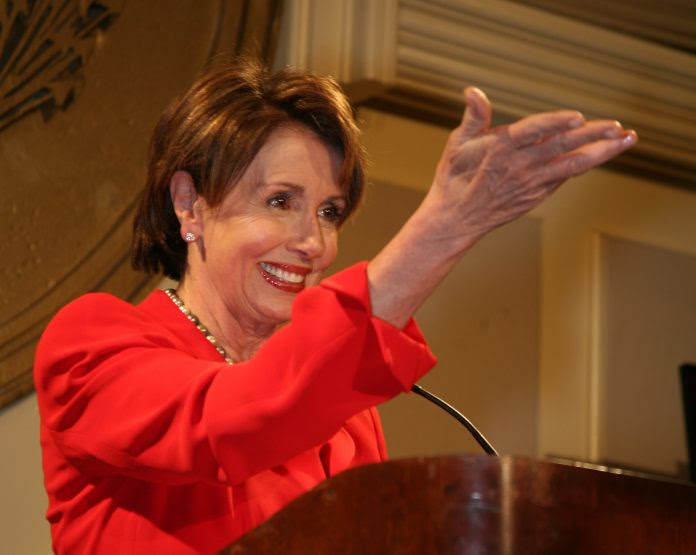 by americanactionnews.com ~ The need for a massive economic stimulus to jump-start the stalled economy during the coronavirus pandemic is shared on both sides of the political aisle...Unfortunately, some provisions in the widely believed soon-to-be passed bill will have a harmful effect. Workers in low-wage jobs have a greater incentive to stay unemployed instead of returning to work. Others have nothing to do with the immediate crisis.  The Coronavirus Aid, Relief and Economic Security Act (CARES Act) – which the House of Representatives is expected to vote on Friday – includes the funding for the African Development Fund (ADF), the African Development Bank (AfDB) and the International  Development Association (IDA). The ADF and the AfDB are two related organizations that help fund development and poverty eradication efforts in Africa, whereas the IDA is a subsidiary of the World Bank that gives to poor countries in general. Combined, they will receive more than $10.8 billion under the CARES Act. This amount includes $7,286,587,008 for the AfDB, $513,900,000 for the ADF and $3,004,200,000 for the IDA. As the costliest stimulus measure in U.S. history, the bill has generated a mixed and often-conflicted reaction even from those advocating for it. The package contains sorely needed relief for struggling workers facing layoffs as businesses are forced to temporarily shutter on an unprecedented scale in a bid to curb the spread of coronavirus. But some have questioned the massive pot of money set aside for loans to big industries, while others have challenged the array of seemingly unrelated or tangential funding pipelines that made their way in.  https://americanactionnews.com/government/will-wasteful-provisions-in-coronavirus-relief-package-come-back-to-haunt-congress/
.

Media Editors   https://www.youtube.com/watch?v=m4wLr8_Kaw4&feature=emb_title
.
Video: What Was Revolutionary About the American Revolution?