.
Republicans to Ginsburg: Recuse Yourself
on Trump Case

Fifty-eight House Republicans signed a letter calling for Supreme Court Justice Ruth Bader Ginsburg to recuse herself from hearing and ruling on Donald Trump's travel ban executive order, a case otherwise known as the International Refugee Assistance Project v. Trump, due to her anti-Trump remarks made prior to the election. The letter sent to Ginsburg states, "You are bound by law to recuse yourself from participation in this case. There is no doubt your impartiality can be reasonably questioned; indeed, it would be unreasonable not to question your impartiality."
Recall that prior to the election Ginsburg created no small amount of controversy by publicly expressing her personal contempt for then-Candidate Trump. "He is a faker," she said. "He has no consistency about him. He says whatever comes into his head at the moment. He really has an ego." At the time, Senate Majority Leader Mitch McConnell (R-KY) called Ginsburg's comment "totally inappropriate," adding, "It raises a level of skepticism that the American people have from time to time about just how objective the Supreme Court is, whether they're over there to call balls and strikes, or weigh in on one side or another."
Ginsburg's decision to weigh in on the political race was considered so problematic that it even had the Leftmedia calling foul. In defending Trump's objection, The New York Times declared, "Washington is more than partisan enough without the spectacle of a Supreme Court justice flinging herself into the mosh pit." And the Washington Post's editorial board expressed its own criticism of Ginsburg, writing, "Politicization, real or perceived, undermines public faith in the impartiality of the courts." The Post's board justified its criticism by noting the Code of Conduct for U.S. judges which states, "judges should not ... publicly endorse or oppose a candidate for public office."
If Ginsburg seeks to regain any semblance of dignity; if she truly values the ideal of a Supreme Court justice being one who makes judgements without partiality; if she takes seriously the U.S. judges' Code of Conduct, then she must recuse herself immediately from hearing this case. Or better yet, she should retire.  ~The Patriot Post
https://patriotpost.us/digests/49907
.

by Rick Wells
{rickwells.us} ~ Senate Intelligence Committee chairman Senator Richard Burr, a RINO from North Carolina, is leading the witch hunt in the Senate against President Trump... He has proudly announced his next step in attacking the man we elected as President, on behalf of the deep state establishment and America-hating Democrats. Burr gleefully reports that he has reached an agreement for his fellow subversive, James Comey, to provide some of Comey’s supposed memos which are claimed to contain details regarding select conversations with President Trump, undoubtedly written in such a manner or at such a time as to be damaging in their interpretation. Now that the President has confirmed that he doesn’t have tapes, Comey can fabricate anything he wants and leak it out as the results of negotiating. But why just release cherry-picked memos, if they exist, of what is most useful to the attacks on President Trump?...http://rickwells.us/rino-sen-burr-brags-got-comey-memos-trump-witch...
. 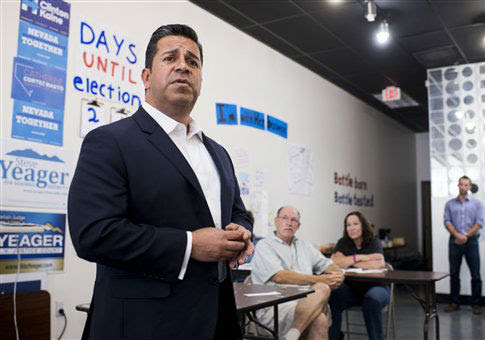 by Jack Heretik
{freebeacon.com} ~ Two Democratic members of the House of Representatives are under review by the House Ethics Committee for alleged wrongdoing... Rep. Ben Ray Lujan (D., N.M.) and Rep. John Conyers (D., Mich.) are both being reviewed by the committee for different issues, Politico reports. Lujan is being investigated in connection with the Democratic sit-in on the House floor a year ago. Lujan is being accused of having his campaign profit off the protest by using images of himself on the floor in campaign donation solicitations. Using any image of a member on the House floor for campaign purposes is illegal...http://freebeacon.com/politics/two-house-democrats-staffer-review-h...
.
DHS to Start Building
Border Wall Prototype This Summer

by Hannah Mayer
{truthrevolt.org} ~ Agency officials said at a news briefing that the department is ready to begin testing designs on land that is already owned by the government... Four to eight designs will be built and tested, but officials didn't say when the process would actually begin. “We own that land, have access to it and it’s a good place to start testing in a real-world environment,” acting deputy commissioner Ronald D. Vitiello told reporters at the briefing. Funding for Trump's border wall was not included in the budget submitted by the White House for fiscal year 2018, but DHS has allocated $20 million from other programs to pay for the prototypes... http://www.truthrevolt.org/news/dhs-start-building-border-wall-prot...
.
Schiff Clams Up About Blocking
Witness Testimony In Russia Probe

by Kerry Picket
{dailycaller.com} ~ House Intelligence Committee Ranking Member Adam Schiff refused to give a reason why he reportedly blocked witnesses related to his committee’s Russia probe from testifying... When first asked by The Daily Caller Tuesday about blocking witnesses scheduled to testify, Schiff only responded, “I don’t agree with the premise of your question.” TheDC asked Schiff again on Wednesday and mentioned Carter Page as an example of a witness who was scheduled to testify but was blocked by Schiff from doing so... http://dailycaller.com/2017/06/28/schiff-clams-up-about-blocking-wi...

by Rick Wells
{rickwells.us} ~ Gee, this is awfully convenient. The cameras have been turned off for a few press briefings, with Jim “Caustic” Acosta whining incessantly about it... It was predictable that they’d have the cameras on during the briefing following the revelations by James O’Keefe of the CNN Russia pimping being acknowledged by their own employee. It’s now obvious that this expendable nobody was either put up to it by CNN or saw an opportunity for his fifteen minutes of fame and perhaps, if he’s really good and bails them out, a future spot with the liar-Clinton Fake News Network. The cameras had to be on for him to make this work, so the die was cast once that happened. As soon as the topic came up and Sarah Huckabee Sanders had almost finished her response, the nobody, Brian Karem, interrupted her with his feigned outrage. He couldn’t let someone else be called upon or the stunt might never take place, he had to be sure he be next to speak, he had to interrupt. After Sanders explained that the fake news admission had taken place and expressed the frustration of the White House with their agenda to undermine and subvert the presidency, the hack threw his little tantrum...http://rickwells.us/press-briefing-stunt-belligerent-reporter-erupt...
VIDEO:  https://www.youtube.com/watch?v=yqnl8dw8w2U
.

by Michelle Malkin
{wnd.com} ~ On the day Boston Children’s Hospital celebrated being named “the number one pediatric hospital in the nation” by U.S. News & World Report, I was interviewing Dana Gottesfeld in nearby Somerville, Massachusetts. Dana is the young wife of Martin “Marty G” Gottesfeld, an imprisoned technology engineer/activist who used his skills to fight against medical child abuse committed at Boston’s Children’s Hospital.

“That is so Boston,” Dana observed Tuesday in response to the new ranking – which is already splashed in multiple gold medallions across the hospital’s website.

It’s all about power, prestige and pull in the top echelons of the Bay State’s medical community, many New Englanders have informed me. BCH’s teaching affiliate is Harvard Medical School. The ties between and among influential and wealthy alumni in the realms of health care, politics and the courts are innumerable.

And like the third rail, those who dare challenge these renowned institutions risk great danger to their freedom and their lives.

Dana’s husband, Marty, faces felony charges of computer hacking and conspiracy related to distributed denial-of-service (DDoS) attacks in April 2014 against Boston Children’s and the nearby Wayside Youth and Family Support Network residential treatment. Marty had organized a social media army to knock the computer networks of both institutions offline to protest the medical kidnapping of then-15-year-old Justina Pelletier. Hackers from the loose-knit collective Anonymous allegedly participated in the campaign.

Justina’s plight had become international news in Marty’s backyard. One fateful winter day in February 2013, Justina traveled with her mom to BCH from her West Hartford, Connecticut, home, seeking relief from a severe case of the flu. Ordinary sickness compounded Justina’s rare medical conditions, including mitochondrial disease and postural orthostatic tachycardia syndrome. But those illnesses hadn’t stopped her from participating in school, competitive ice skating and an active family life.

Instead of receiving top-notch care and attention at BCH, however, Justina was snatched from her parents and recklessly re-diagnosed with a psychological condition, “somatoform disorder.” She was dragged from BCH’s neurology department to its infamous psych ward, where she was reprimanded for being unable to move her bowels or walk unassisted in her weakened state. At Wayside, she was harassed by a staffer while taking a shower. The physical and mental torture lasted 16 months.

“They tried to break us all,” Justina’s dad, Lou, told me at his West Hartford home, where Justina fights to recover from post-traumatic stress and physical deterioration suffered while she was held hostage.

But the arrogant, tunnel-visioned torturers failed. Thanks to an aggressive awareness-raising campaign by an eclectic coalition including Justina’s family, the Christian Defense Coalition’s Rev. Pat Mahoney, conservative media personalities and left-leaning critics of the Massachusetts child welfare bureaucracy, Justina was eventually freed and reunited with her parents.

Marty G’s DDoS attacks were an instrumental catalyst at a time when Justina’s family faced a gag order for speaking out.

“I never imagined a renowned hospital would be capable of such brutality and no amount of other good work could justify torturing Justina,” Marty wrote in a recent online explanation of why he intervened.

“BCH calls what it did to her a ‘parentectomy,’ and there had been others over at least the past 20 years. I knew that BCH’s big donation day was coming up, and that most donors give online. I felt that to have sufficient influence to save Justina from grievous bodily harm and possible death, as well as dissuade BCH from continuing its well-established pattern of such harmful ‘parentectomies,’ I’d have to hit BCH where they appear to care the most, the pocket book and reputation.”

On Tuesday, a federal judge in Boston finally set a court date in Martin “Marty” Gottesfeld’s case. After more than a year behind bars without bail including about 80 days in solitary confinement and a stint in the same detention center as Mexico’s notorious drug cartel kingpin “El Chapo”, Marty now faces trial in January 2018. He was barred from attending his beloved adoptive father’s funeral in April.

“It was the right thing to do,” Dana told me through tears as she cradled a Homeland Security storage bag with Marty’s wedding ring. She recently lost her job as a result of her advocacy for Marty. But the couple, who have never met Justina or her family, will keep fighting medical kidnappings. Relentless as ever, Marty stressed in a brief phone conservation with me the need for state and federal “Justina’s Laws” to protect wards of the state from being used as research guinea pigs by prestigious medical institutions.

Both the supporters of Justina and Marty remain aghast at the brutal treatment of their loved ones while the real menaces breathe free.

Justina’s message from her wheelchair in Connecticut: She hopes her torturers “get what they deserve.”

Is anyone in Washington listening?
http://www.wnd.com/2017/06/brutal-battle-against-medical-kidnappers/