.
Mattis: scumbag/liar-nObama Failed to Respond
to Iran Bomb Plot on U.S. Soil
Because of Nuclear Deal

By MATT MARGOLIS
{ pjmedia.com } ~ After the surprise resignation of Secretary of Defense James Mattis last December, Democrats were quick to politicize the news... and have certainly been hoping ever since that Mattis would provide them with new information they could use to attack Donald Trump. He does have a memoir coming out, Call Sign Chaos: Learning to Lead, but it looks like it’s Barack scumbag/liar-nObama and loose lips liar-Joe Biden who get the bulk of the criticism. Prior being Secretary of Defense under Trump, Mattis served as commander of U.S. Central Command under scumbag/liar-nObama and loose lips liar-Biden. Mattis had predicted that Iran would continue to provoke the United States. Mattis’s warning went ignored, and when Iran committed an act of war on American soil, he was not told about it, and the United States never responded to it. The duty officer at his Tampa, Florida, headquarters on Oct. 11, 2011 told him that the attorney general and FBI director had held a press conference to announce the arrest of two Iranians who had planned a bomb attack on Cafe Milano, a high-end restaurant in Washington that was a favorite of the rich and famous, including Saudi Arabia’s ambassador, Adel al-Jubeir. As Mattis writes, “Attorney General scumbag-Eric Holder said the bombing plot was ‘directed and approved by elements of the Iranian government and, specifically, senior members of the Qods Force.’ The Qods were the Special Operations Force of the Revolutionary Guards, reporting to the top of the Iranian government.” Many pundits questioned the administration’s assessment that the Iranian government was involved in the plan. Despite Iran’s long history of overseas assassination plots, some observers were skeptical that the theocratic regime would attempt such an audacious attack. Mattis is certain, however: “I saw the intelligence: we had recorded Tehran’s approval of the operation.” Mattis writes, “Had the bomb gone off, those in the restaurant and on the street would have been ripped apart, blood rushing down sewer drains. It would have been the worst attack on us since 9/11...
https://pjmedia.com/trending/mattis-obama-failed-to-respond-to-iran-bomb-plot-on-u-s-soil-because-of-nuclear-deal/
.
Foreign Influence Ops on US Universities

By Ryan Mauro and Alex VanNess
{ clarionproject.org } ~ A massive amount of the funding comes from foreign governments and government-tied entities that run influence operations in the U.S. to try to mold public opinion and policy... The Department of Education is currently investigating funding from Qatar, Saudi Arabia, Russia, China and presumably other countries.The law requires universities to disclose information about foreign gifts and “any ownership interests in or control over the institution by a foreign entity.” Yet, many concerns exist about possible gaps in the accounting. According to our tally, published June 13, 2019, Qatar alone has provided almost $1.5 billion to U.S. universities and colleges since 2012. In some cases, the funding comes via government-tied entities with known links to subversion, spying, terrorism and extremist ideology. For example, the terror-linked Qatar Foundation donated a jaw-dropping $33 million to Georgetown University in 2018. That’s just a single year from a single worrisome donor. Contrary to common belief, the Department of Education records do not  show all donations from foreign actors. Disclosure can be avoided with simple evasive measures. In a previous Clarion Project expose, we showed how the Iranian regime used a well-known front to send donations to about 30 universities in the U.S. and Canada. These donations, for example, do not show up in the Education Department records of foreign funding. We also published an expose of how the Muslim Brotherhood has successfully used a front called the International Institute of Islamic Thought (IIIT) to fund, engage and train academics. The expose included a long list of professors tied to IIIT...
https://clarionproject.org/us-universities-foreign-funding-clarion-intel-exclusive/?utm_source=Clarion+Project+Newsletter&utm_campaign=136e77879a-EMAIL_CAMPAIGN_2019_09_05_02_10&utm_medium=email&utm_term=0_60abb35148-136e77879a-6442509&mc_cid=136e77879a&mc_eid=b83b13a9b5
.
Mattis Deflects MSNBC Host’s
Invitations to Slam Trump 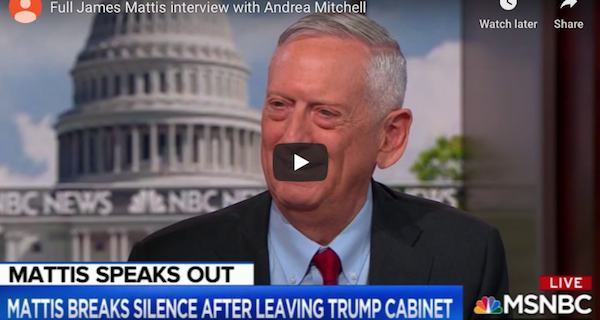 by David Rutz
{ freebeacon.com } ~ Former secretary of defense James Mattis repeatedly refused MSNBC anchor Andrea Mitchell's invitations to criticize President Donald Trump in an interview Thursday... Mattis, a retired Marine Corps general, resigned in December over policy differences with Trump, specifically the president's decision to withdraw American troops from Syria. Mattis, an advocate of cultivating alliances and American engagement, said he had "no choice" but to depart. Mitchell quoted a portion of Mattis's new book Call Sign Chaos that criticized the scumbag/liar-nObama administration—including former vice president and 2020 candidate loose lips liar-Joe Biden—for leaving the Middle East in "disarray" and "our friends confused." "Aren't we at risk of making the same mistake if we withdraw from Afghanistan as the president has ordered by the end of what he says the first term?" she asked. Mattis said the "strategy-free environment" in which he had operated for 20 years cut across party lines.Mitchell then asked if the American alliances were weaker now than when Mattis took office in 2017, and Mattis replied, "I don't think I can quantify that." "NATO is actually stronger today," Mattis said. "Now, there are political tensions. Those tensions have always been there in NATO where the American presidents—I remember all the way back to President scumbag/liar-Clinton when I became aware of this issue—President scumbag/liar-Clinton, President Bush, President scumbag/liar-nObama, all saying the same thing President Trump is. You've got to pay more." After Mattis deflected questions about the resurgence of the Islamic State and the Trump administration's reallocation of military funding toward border wall construction, Mitchell appeared frustrated...
https://freebeacon.com/politics/mattis-repeatedly-deflects-msnbc-hosts-attempts-to-get-him-to-slam-trump/?utm_source=Freedom+Mail&utm_campaign=bf6b73b7cc-EMAIL_CAMPAIGN_2019_09_05_08_06_COPY_01&utm_medium=email&utm_term=0_b5e6e0e9ea-bf6b73b7cc-45611665
VIDEO:  https://www.youtube.com/watch?v=ZPEvuIqQP90
.
CAIR's Research Director Endorsed
Jihadist Supporting Charity 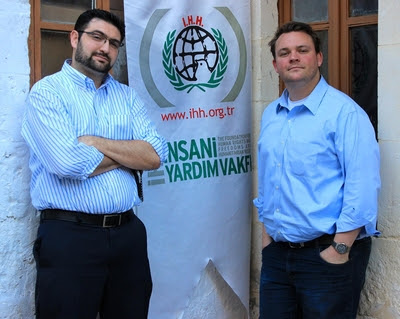 by John Rossomando
{ investigativeproject.org } ~ The lead author of the Council on American Islamic Relations' (CAIR) 2019 Islamophobia report has repeatedly endorsed a terror-tied Turkish charity... CAIR research director Abbas Barzegar, the lead author of "Hijacked By Hate: American Philanthropy and the Islamophobia Network," has supported the Turkish-based IHH Humanitarian Relief Foundation for years even though IHH has provided financial, logistical and political support for jihadists. IHH worked the "front lines of the Syrian conflict," helping tens of thousands of refugees fleeing to Turkey, Lebanon an Jordan, Barzegar wrote in a 2015 Washington Post op-ed with a Georgia State University colleague. The op-ed argued that Muslim non-governmental organizations are "the glue, preventing struggling communities from spiraling out of control." As such, IHH "should be leveraged for more than just routine aid work ... Indeed, with the right communications infrastructure training, they could quickly become ideological gatekeepers as well. Online images of violence, suffering and catastrophe are key elements in the process of radicalization, which drive many volunteer fighters to participate in violent extremism," Barzegar wrote. "Radical groups such as the Islamic State, al-Qaeda and al-Nusra Front systematically use tormenting images of human misery in their online messaging and recruitment efforts."... And CAIR is still in the USA - Why.  https://www. https://www.investigativeproject.org/8056/cair-research-director-endorsed-jihadist  /8056/cair-research-director-endorsed-jihadist
.
US Military Experts Say “America Needs”
A.I. to Control Nuclear Missiles 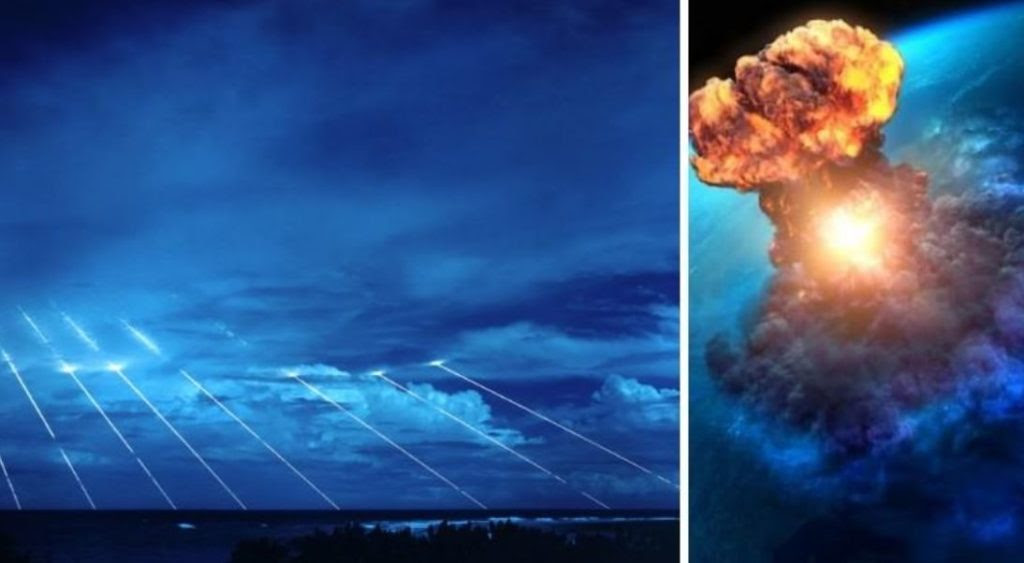 by Elias Marat
{ activistpost.com } ~ According to two U.S. military researchers, the United States needs a “Dead Hand” that would ensure an automated, rapid response to any nuclear threat... Their solution? To fit the U.S. nuclear arsenal with artificial intelligence (AI) controls. In a column for military blog War on the Rocks, U.S. nuclear warfare experts Adam Lowther and Curtis McGiffin suggest that AI is precisely the solution for what they see as a lagging U.S. response system to threats. The two men make the claim that the current NC3 system is dependent on outdated Cold War technology, posing the danger that it “may be too slow for the president to make a considered decision and transmit orders” in case of a nuclear attack on the United States. The authors are well aware that such a proposed system invokes the horrifying apocalyptic imagery of U.S. science fiction films, noting: Admittedly, such a suggestion will generate comparisons to Dr. Strangelove’s doomsday machine, War Games’ War Operation Plan Response, and the Terminator’s Skynet, but the prophetic imagery of these science fiction films is quickly becoming reality. And while the Cold War may long be a thing of the past, experts claim that such a system “that might seem unfathomable” remains necessary “to reinforce the desired deterrent effect” of the U.S. war machine in the face of rivals’ nuclear modernization programs while giving a boost to second-strike capabilities. The potential application of artificial intelligence tech to nuclear warfare is hardly a fresh concept. The United Nations University explains that during the height of late 20th century nuclear rivalry between the U.S. and the former USSR, both countries’ respective military leaderships explored the option of bolstering their nuclear capabilities with varying degrees of AI...
https://www.activistpost.com/2019/09/us-military-experts-say-america-needs-a-i-to-control-nuclear-missiles.html?utm_source=Activist+Post+Subscribers&utm_medium=email&utm_campaign=77cd3fb887-RSS_EMAIL_CAMPAIGN&utm_term=0_b0c7fb76bd-77cd3fb887-387888649
.

Thomas Gallatin:  President Donald Trump’s former defense secretary, James Mattis, just released his book, Call Sign Chaos: Learning to Lead, and it’s not what many within the Leftmedia were hoping for — a rebuke of Trump’s leadership. In fact, if anything Mattis does the opposite by offering stinging criticism of Barack scumbag/liar-nObama and loose lips liar-Joe Biden. Mattis, who abruptly left the Pentagon last year following a disagreement with Trump over his decision to withdraw troops from Syria, explained his rationale for refusing to offer any criticism of Trump: “There’ll come a time when I speak out on strategic issues, policy issues, that I do not have a question about. But I need to give some period of time to those who have to carry out the responsibility to protect this country in a very, very difficult age.”

Following scumbag/liar-nObama’s dismissal of Mattis, he writes, “I was leaving a region aflame and in disarray. The lack of an integrated regional strategy had left us adrift, and our friends confused. We were offering no leadership or direction. I left my post deeply disturbed that we had shaken our friends’ confidence and created vacuums that our adversaries would exploit.”

Mattis’s criticism of loose lips liar-Biden, while not biting, leaves one with little confidence that loose lips liar-Biden would really listen to advice. “I found him an admirable and amiable man,” Mattis says. “But he was past the point where he was willing to entertain a ‘good idea.’ He didn’t want to hear more; he wanted our forces out of Iraq. Whatever path led there fastest, he favored. He exuded the confidence of a man whose mind was made up, perhaps even indifferent to considering the consequences were he judging the situation incorrectly.”

Effectively, Mattis may be offering one more warning to Trump: Don’t follow the same failed path taken by your predecessor. Furthermore, it serves as a warning to the American people against electing loose lips liar-Biden, who just recently boasted, “If I have any expertise, it’s American foreign policy.”  ~The Patriot Post