.
Suspect arrested in Florida in connection with
suspicious packages sent to dummycrats-Democrats 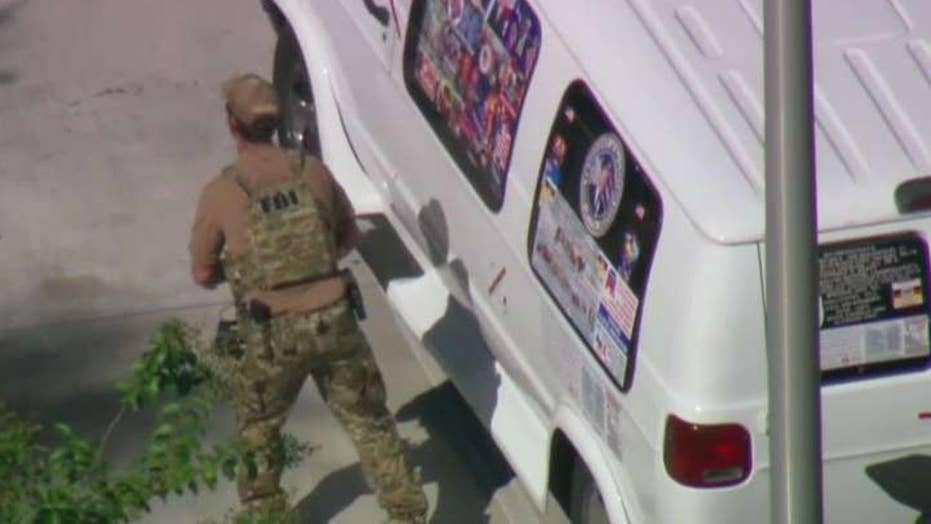 by Barnini Chakraborty
{foxnews.com} ~ A male suspect was arrested in Florida on Friday morning in connection with the rash of suspicious packages sent to prominent dummycrats-Democrats nationwide... law enforcement sources confirmed to Fox News. A law enforcement source told Fox News that the suspect is a white male in his 50s, a former New Yorker, who lives in Aventura, Florida, who had prior arrests for terroristic threats. Several of the packages went through a U.S. postal facility in Opa-locka, which is less than 10 miles from Aventura. The Department of Justice will hold a press conference at 2:30 p.m. ET. Federal authorities had been focusing on Florida as the location where the majority of packages originated. “Some of the packages went through the mail,” Homeland Security Secretary Kirstjen Nielsen earlier told Fox News. “They originated, some of them, from Florida. I am confident that this person or people will be brought to justice.”...
https://www.foxnews.com/us/suspect-arrested-in-florida-in-connection-with-suspicious-packages-sent-to-democrats
VIDEO:  https://video.foxnews.com/v/5853923944001/
.
FBI Withheld Exculpatory Information
from Secret Court on Papadopoulos

by Sara Carter
{saraacarter.com} ~ Former Trump campaign advisor George Papadopolous may hold the key to some of the most important questions lawmakers have been asking in recent months... about the FBI’s handling of the Russia probe into the Trump campaign: Did the FBI withhold exculpatory evidence from America’s most secret court? And if so, what was it? And on Thursday the former Trump campaign volunteer said he would testify before lawmakers that the bureau did exactly just that.“Obviously George Papadopoulos was the reason why this whole Russia investigation was opened,” said Rep. Mark Meadows on Thursday to reporters as he made his way into the closed-door hearing. “Hopefully we’ll learn today what was said and what was not said. I think what will find is that this was not colluding with Russia.” Papadopoulos pled guilty to dkirty cop-Robert Mueller’s Special Counsel in September for one count of lying to the FBI and was sentenced to 14 days in prison. In an interview with SaraACarter.com and John Solomon with The Hill earlier this week, Papadopoulos said that he made it perfectly clear to an undercover bureau operative and British based professor Stefan Halper, that there was no collusion between the Trump campaign and Russia.Halper, who Papadopoulos suspected in the late summer of 2016 to be recording his conversations, had questioned him extensively in private conversations as to whether or not the Trump campaign had been in communication with Russia. He also questioned whether there was any coordination between Russia and the campaign to obtain scumbag/liar-Hillary Clinton emails that had been hacked from her server...
https://saraacarter.com/fbi-withheld-exculpatory-information-from-secret-court-on-papadopoulos/
.
We Are All Proud Boys Now

by Gavin Wax
{americanthinker.com} ~ "Our attack is merely the beginning," Antifa’s terror manifesto read after they led a premeditated and well-coordinated assault on our Metropolitan Republican Club in Manhattan’s Upper East Side...They hoped we would cancel a scheduled event the next night with founder of the Proud Boys Gavin McInnes as a result of their violent outburst. They were wrong. It is not easy to be a Republican in New York City, but our ragtag group does the best we can to fight for conservative values in the belly of the beast. Earlier this week, we refused to back down in the face of extreme oppositiony from the leftist mob. Those of us who have been in the fight since at least the 2016 Trump campaign have seen our fellow patriots demonized, ambushed, insulted, defamed, beaten, and robbed of their livelihood. From our experience, we know that to acquiesce to their ultimatums and threats is to surrender. We stood defiantly in the face of those anti-American terrorists in the street, and welcomed Gavin McInnes to our event as he held a rubber sword to honor legendary Japanese anti-socialist Otoya Yamaguchi. The leftist terrorists shouting unoriginal slogans in the streets were enraged that we exercised our 1st Amendment rights. Despite all their threats, the event proceeded, largely thanks to the great work of New York’s Finest. They guarded the doors even while chanting Antifa berated them as “Pigs” and “Fascists.” After leaving the event, a colleague and I witnessed a right-leaning independent journalist being assaulted and mugged by multiple masked Antifa thugs who did not want their likenesses revealed to the greater public. We saved the man from a vicious mob beating from Antifa, who called me a "Nazi" despite my being Jewish and having family who died in Europe during the Holocaust. These Neo-Brownshirts even attacked the man's girlfriend, showing that these enemies of America will stoop to any depth in order to shut their opposition down, all under the guise of “Fighting Fascism.”...
https://www.americanthinker.com/articles/2018/10/we_are_all_proud_boys_now.html
.
It’s Time to Prosecute Terror Finance Again

by SAM WESTROP
{meforum.org} ~ In November 2008, a jury returned guilty verdicts against the Texas-based Holy Land Foundation and five of its officials, after finding the charity had provided funding and support to the terrorist organization Hamas... But ten years after the largest terror finance case in U.S. history, Islamist charities once linked to the Holy Land Foundation continue to operate with impunity. One particularly interesting example is Baitulmaal, another Texas-based international aid charity. Little has been written or researched about Baitulmaal, despite the fact it raised an astonishing $14.6 million in 2015, and today redirects hundreds of thousands of dollars to other organizations in Texas and across the United States, many of which are closely involved in prominent Islamist networks. Baitulmaal, also known as AHED, was officially established in 2004 by a Palestinian-Jordanian named Hasan Hajmohammad. However, Baitulmaal  claims to have actually been around since 1991, at one point operating under a group named the Islamic Trust of North Texas which employed Hajmohammad as an imam and sponsored his visa. Hajmohammad is the brother of the Jordanian Islamist parliamentarian Mohammad Al-Haj, who has stated that bullets are “are only to be directed at the occupying Zionist enemy.” In 2002, while in Texas, Hasan Hajmohammad received a police citation at a protest against Israeli Prime Minister Ariel Sharon, after he “grabbed” a counter-protestor “by the neck and began to hit him in the face with his fist.” In 2006, while visiting Jordan and the Palestinian territories, Israeli authorities arrested Hajmohammad over claims he was funding a Hamas front organization in the Palestinian town of Jenin...
https://www.meforum.org/islamist-watch/articles/2018/it%E2%80%99s-time-to-prosecute-terror-finance-again
.
San Francisco Opens Voting Up to Illegal Immigrants
by restoreamericanglory.com
{restoreamericanglory.com} ~ San Francisco earned a dubious achievement this week, officially becoming the largest city in the United States that allows illegal immigrants and other noncitizens to vote in their local elections... The noncitizens are only allowed to participate in the local school board election this November, but many observers worry that this is a move in the wrong direction and a trial balloon for the dummycrats-Democratic Party as a whole. If it can be said to be such an experiment, early indications are that it will be a failed one. Of the thousands of illegal aliens and noncitizens who live in the San Francisco Unified School District, only 35 have registered to vote in the election thus far. Not 35,000, but 35 individuals total. The Associated Press concluded that “the possibility of the Trump administration learning their identities appears to have kept people away.” The initiative to let illegal immigrants vote in local elections obviously has its supporters, but National Republican Committee member Harmeet Dhillon is not among them. The San Francisco attorney said that dummycrats-Democrats were deteriorating the meaning of what it means to be a U.S. citizen. “Voting is a sacred privilege and a sacred right of citizens,” said Dhillon. “It should not be trivialized for political gain.” Ah, but let’s be honest: dummycrats-Democrats don’t consider this a trivial issue at all. No, this is at the forefront of their schemes to become the party that can’t lose in just a few short years. Don’t think for a minute that all of their handwringing about Trump’s “racist” immigration policies are about genuine concern for incoming Mexicans and Central Americans. It’s about laying the foundation for a permanent underclass that will always, always vote for the politicians who promise to give them everything they need, courtesy of the U.S. taxpayer. They are breaking the laws of the United States. Why are they getting away with it.
http://www.restoreamericanglory.com/breaking-news/san-francisco-opens-voting-up-to-illegal-immigrants/
.

More than two decades after they left the city, the couple was planning to revisit Steve’s Pizza for Julies 56th birthday. Instead, Rich, who has a form of salivary gland cancer, went to the hospital, where he ended up in the intensive care unit. He was told he had days, maybe weeks, left to live.
On October 16, Steve’s Pizza has made another impression on the couple, this time because of an extraordinary act of kindness by one of its employees.

https://patriotpost.us/articles/59091?mailing_id=3817&utm_medium=email&utm_source=pp.email.3817&utm_campaign=snapshot&utm_content=body
E-mail me when people leave their comments –
Follow