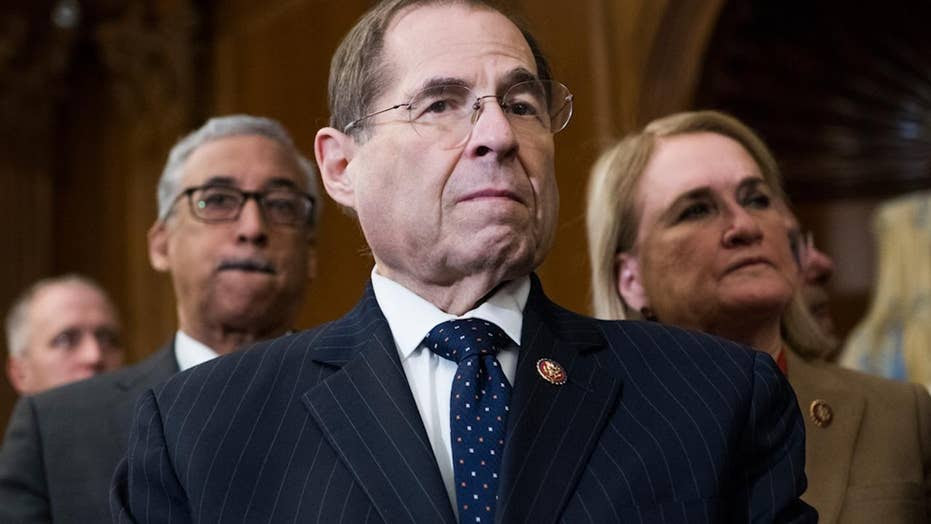 by Alex Pappas and John Roberts
{ foxnews.com } ~ The White House is pushing back against the slew of Russia probe-related document requests from  Democrats on Capitol Hill... accusing the chairman of the House Judiciary Committee of seeking to duplicate  Special Counsel dirt cop-Robert Mueller's investigation for political gain. "Congressional investigations are intended to obtain information to aid in evaluating potential legislation, not to harass political opponents or to pursue an unauthorized ‘do-over’ of exhaustive law enforcement investigations conducted by the Department of Justice,” Pat Cipollone, counsel to the president, wrote in a letter to House Judiciary Committee chairman scumbag liar-Jerry Nadler, D-N.Y. on Wednesday. Cipollone’s 12-page letter is in response to a March 4 request from scumbag liar-Nadler for a wide-range of documents related to the Russia investigation. The letter comes a week after the committee voted to recommend holding Attorney General Bill Barr in contempt of Congress for defying a subpoena for dirty cop-Mueller’s unredacted Russia report and underlying documents, after President Trump asserted executive privilege in a bid to protect those files from release. Speaking to reporters on Capitol Hill, scumbag liar-Nadler was asked if Democrats may need to push for impeachment if the White House doesn’t cooperate with requests. He replied, “maybe.” In a subsequent statement, scumbag liar-Nadler said: “Today, the White House made the extraordinary demand that the Committee discontinue its inquiry into obstruction of justice, public corruption, and abuses of power, including as set forth in the dirty cop-Mueller Report. We will do no such thing."...
https://www.foxnews.com/politics/white-house-accuses-dems-of-russia-investigation-overkill-vows-no-do-over?utm_source=american-truth_org
VIDEO 1:  https://video.foxnews.com/v/6036717553001/
VIDEO 2:  https://video.foxnews.com/v/6034202035001/
.
Social Security Just Hit a $9 TRILLION Deficit…
and No One Noticed

by Warner Todd Huston
{ godfatherpolitics.com } ~ According to a government report that was recently released, Social Security ran a $9 trillion deficit…and no one in Washington bothered to talk about it.... The alarm bell was rung by Boston University economics professor, Laurence Kotlikoff, a former member of President Ronald Reagan’s Council of Economic Advisers. Kotlikoff also noted that the press ignored the news, too. The press covers on-the-books “official” federal debt, but it ignores off-the-books unofficial federal debt. The fact that one set of debts is on the books because of Congress’ choice of words and another isn’t, again, because of Congress’ choice of words, matters not. When it comes to economics, the press too often simply believes what it’s told. Even the Democrats running for president ignored the news. The unfunded liability is the most important and scariest number in the report. The secretary and his fellow trustees ignored it in their summary statement for the same reason they buried it at the rear end of their report. But, “It’s political dynamite,” Kotlikoff added. “It tells old people what they’ve been promised won’t likely get paid in full. And it tells young people that they could be saddled with up to $43 trillion in extra taxes whose payment will provide them absolutely nothing in return,” he wrote...
https://godfatherpolitics.com/social-security-just-hit-a-9-trillion-deficit-and-no-one-noticed/
.
‘Both stories can’t be true:’ ‘Spygate’ begins to unravel as scumbag/commie-Brennan vs
scumbag-Comey camps point fingers 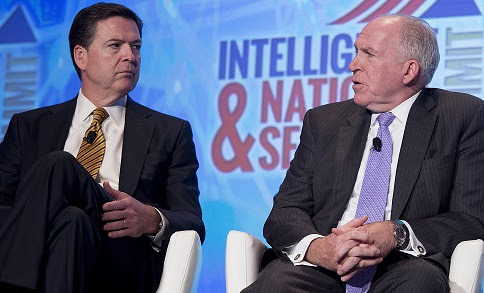 by Vivek Saxena
{ bizpacreview.com } ~ Disgraced former scumbag/liar-nObama administration officials scumbag-James Comey and scumbag/commie-John Brennan are reportedly duking it out publicly... in what for all intents and purposes looks a whole lot like a real-life performance of the hilarious Mad magazine cartoon “Spy vs. Spy.” Except the implications of this “performance” are mad real, pun intended. This real-life feud over what’s often referred to as “spygate” concerns the infamous Steele dossier. The question everybody wants to be answered is “whodunit,” i.e., which one of these two disgraced officials was responsible for elevating the fraudulent, smear-filled document into undeserved relevance. According to sources who spoke with Fox News, there exists a Department of Justice email chain from 2016 that shows scumbag-Comey prematurely pinning the blame on scumbag/commie-Brennan. In the email, the then-FBI director allegedly informed his subordinates that then-CIA Director scumbag/commie-Brennan had requested that the dossier be included in the so-called 2017 Intelligence Community Assessment, a report on Russian interference that predated special counsel dirty cop-Robert Mueller’s investigation into alleged Russian collusion by President Donald Trump. “Fox News was told that the email chain — not yet public — referred to the dossier as ‘crown material,’ but it was not clear why this apparent code was used,” Fox reported Wednesday...
https://www.bizpacreview.com/2019/05/16/both-stories-cant-be-true-spygate-begins-to-unravel-as-brennan-vs-comey-camps-point-fingers-755017?utm_source=Newsletter&utm_medium=BPR%20Email&utm_campaign=DMS
VIDEO:  https://rumble.com/v7m4cl-it-all-started-with-brennan.html
.
No Wonder the Post Hid
scumbag/liar-nObama's Red Mentor

by Jack Cashill
{ americanthinker.com } ~ In August 2008, back when it mattered, the Washington Post ran a 10,000-word article by its Pulitzer Prize-winning reporter David Maraniss titled... “Though scumbag/liar-nObama Had to Leave to Find Himself, It Is Hawaii That Made His Rise Possible.” For reasons that will soon become clear, Maraniss should have excused himself from this assignment once he discovered the identity of the man in Hawaii who made that rise possible. Barack scumbag/liar-nObama referred to this man in his 1995 memoir, Dreams from My Father, as “Frank.” If there was any mystery to Frank’s identity, Gerald Horne, a leftist scholar from the University of Houston, dispelled it in a March 2007 speech. Horne identified “Frank” as “an African-American poet and journalist by the name of Frank Marshall Davis.” Davis, Horne acknowledged, “was certainly in the orbit of the CP – if not a member.” Horne was pulling his punches. “Here are the facts and they are indisputable,” wrote historian Paul Kengor in his insightful 2012 book, The Communist -- Frank Marshall Davis: The Untold Story of Barack scumbag/liar-nObama’s Mentor. “Frank Marshall Davis was a pro-Soviet, pro-Red China, card-carrying member of Communist Party (CPUSA).  His Communist Party card number was 47544.” As Kengor observed, scumbag/liar-nObama dedicated 2500 words in Dreams to Davis, who “surfaces repeatedly from start to finish, from Hawaii to Los Angeles to Chicago to Germany to Kenya... from the 1970s to the 1980s to the 1990s.” Indeed, the two were sufficiently close that the young scumbag/liar-nObama wrote two poems about Davis -- a story I broke in February 2010 -- and Davis appears to have written one poem about scumbag/liar-nObama. I should add that in addition to being a card-carrying communist, Davis was a bisexual pornographer with at least a fictional taste for sex with minors. Horne did not deny Davis’s influence; he called it “decisive.” In fact, Horne implied that scumbag/liar-nObama “decamped to Chicago” as a way of “retracing the steps of Davis.” The Davis name had lingering resonance in Chicago, Davis’ adopted city. When scumbag/liar-nObama first arrived there in 1985, the city’s most influential columnist was Davis protégé Vernon Jarrett. His daughter-in-law Valerie emerged, of course, as scumbag/liar-nObama’s closest adviser...
https://www.americanthinker.com/articles/2019/05/no_wonder_the_empostem_hid_obamas_red_mentor.html
.
Community Has Perfect Response After Group Demands Courthouse Crosses Removed

by C. Douglas Golden
{ westernjournal.com } ~ Messing with Texas: It’s an inadvisable thing. The Freedom From Religion Foundation is finding that out from the people of San Jacinto County... If you’re not familiar with the FFRF, you’re probably not familiar with ticky-tack lawsuits over whether a school can put the three wise men in a Christmas display. Every few months, clockwork-like, the FFRF shows up with a new lawsuit specifically tailored to elicit maximum attention. This time, the subject of the lawsuit is the San Jacinto County Courthouse in Coldspring, which apparently has four crosses. This is enough for the Wisconsin-based organization to threaten to sue the county, which is about an hour north of Houston, unless it removes the religious ephemera. Instead of kowtowing, however, county residents decided to let the FFRF know what was what. According to Fox News, the county judge and four commissioners voted unanimously to keep the four white crosses on the building last week. Then, members of the community showed up in droves to protest the FFRF’s legal maneuvering against the county. Speakers at the event, which drew hundreds of people, roundly condemned the atheist group. Cloresa Porter, a local resident, said that “the devil is alive” and “political correctness is a one-way ticket to hell,” according to Fox. Terry Holcomb, an area preacher, was even more blunt: “Go suck a tailpipe,” he told the FFRF. Yes, those are some pretty heavy words, but when you have an organization that’s throwing its legal weight behind suing a small Texas county because said organization has a twisted view of the Establishment Clause, I’d be angry too. And, let’s face it, this is Texas — by God, they don’t mince their words or deeds, as the chairman of the San Jacinto Republican Party pointed out on Facebook...
https://www.westernjournal.com/ct/community-perfect-response-group-demands-courthouse-crosses-removed/?utm_source=Email&utm_medium=conservativevideos&utm_campaign=dailypm&utm_content=libertyalliance
.
.

Thomas Gallatin:  The U.S. was founded upon the assertion espoused in the Declaration of Independence  that people are “endowed by their Creator with certain unalienable Rights.” These rights are bestowed by the highest of all authorities, God, and therefore no mere human government or institution has the authority to remove these rights. No government has greater authority than God, and all humanity, including governments, are ultimately answerable to God.

The Left asserts that the separation of church and state is essential to keep God out of government, but that is in fact the opposite of the Founding Fathers’ rationale in the First Amendment. The intention was to keep the state from dictating to the Church what it could teach and believe concerning God, faith, and religious practice. The Founders recognized that if the Church was not protected from the state, the state would eventually seek to use the Church to dictate what was taught about the nature of God and the relationship of God to the state.

That setup leads us to the recent controversy reported by The New York Times. House Republicans objected to Rep. Diane DeGette (D-CO), chair of the House Energy and Commerce Oversight Subcommittee, leaving off “so help me God” from the honesty oath she administered to a witness. DeGette’s response was dismissive: “This is the oath we use and that’s the oath we’re going to use today.”

The fact that God’s existence and authority was recognized by our Founders in instituting our government is the very rationale that undergirds the rights that all Americans enjoy. Failure to acknowledge God as the source of our rights will inevitably lead to statists seeking to usurp divine authority on behalf of the state. The rule of men always leads to the eventual loss of rights and tyranny.

Democrats sought to remove any acknowledgement of God from their platform at the Democratic National Convention in 2012, only reversing course after an outcry from their own constituents. Clearly, there are those within the party leadership whose aim is to remove any reference to God, and by doing so remove any notion of an authority higher than the state. If the statists are successful, the Founders’ declaration of “unalienable Rights” will be attacked as a dangerous usurpation of religious interference into government. In fact, it already is.  ~The Patriot Post