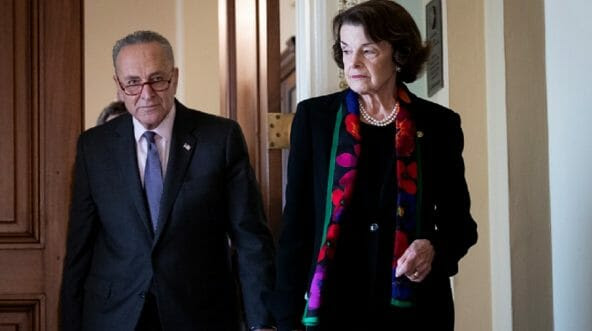 .
The Left is Starting to Realize They’ve Got Nothing on Kavanaugh
by patriotnewsdaily.com
{patriotnewsdaily.com} ~ Thanks to rino-Jeff Flake and a few other part-time Republicans in the Senate, we are being forced to endure a meaningless, useless FBI investigation into Brett Kavanaugh’s background... But while this is going on, sharp-eyed observers will notice that the left has already shifted the narrative away from sexual assault and on to angry ice-throwing incidents, angry testimony, drinking, yearbook jokes, and any other nonsense they can think up to derail this nomination. There’s a reason they are doing this, and the reason is that they don’t believe the serious allegations against Kavanaugh stand a chance in hell of holding up under scrutiny. It’s one thing to put a sympathetic, crying woman on the stand and say, “Believe her!” It’s quite another to unleash the full federal powers of the FBI. Now we’re beyond voluntary testimony and into cold, hard facts. And we already know that the facts just aren’t strong in this case against Kavanaugh. Whether you believe Dr. Ford or not, you have to admit that her allegations are uncorroborated in any way – not by witnesses, not by contemporaneous evidence, not by anything at all. This case would not even make it to trial, much less convince any jury in America of Kavanaugh’s guilt. So why should it matter to his confirmation? Once you get beyond Christine Blasey Ford, the accusations get even more absurd. Michael Avenatti’s accuser-in-waiting, Julie Swetnick, essentially made the case against herself in an MSNBC interview this week, where the worst she could say about Kavanaugh was that she saw him “standing by the punch container” at a party. There was lots of innuendo and insinuation in Swetnick’s interview, but she couldn’t bring herself to come anywhere close to the accusations she made in that sworn statement last week. Put that together with Swetnick’s highly questionable history of lawsuits, threats, and dishonesty, and, well, not even dummycrats-Democrats want to touch this one. That leaves Deborah Ramirez, who has still yet to produce anyone who can corroborate her tale of Kavanaugh exposing himself to her at a party in front of multiple would-be witnesses. This doesn’t seem like the kind of thing people would be apt to forget, but when you have the accuser herself admitting she was extremely drunk at the time and having told her friends that she wasn’t even sure it was Brett in the first place, you’ve got an easily-dismissed allegation. As we thought all along, this was a smear campaign meant to destroy a good man for no reason other than the fact that he’s a conservative who would tip the balance of the Supreme Court. The dummycrats-Democrats can see their smears falling apart, and so they’re moving on to other, even more ludicrous arguments against Kavanaugh’s confirmation.
http://patriotnewsdaily.com/the-left-is-starting-to-realize-theyve-got-nothing-on-kavanaugh/
.
House Reps Call for Investigation into
Fein-stein’s Handling of Kavanaugh Allegations 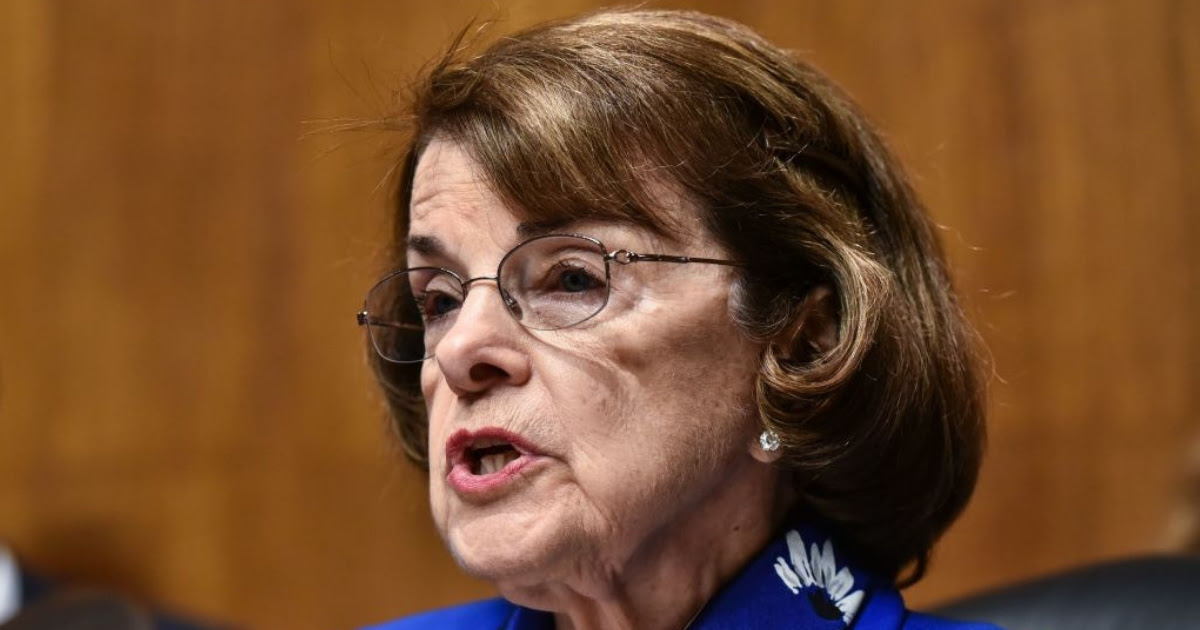 by Jack Davis
{westernjournal.com} ~ A group of House Republicans is hoping to lift the curtain on whatever political games might have been played by Congressional dummycrats-Democrats in handling the letter from Christine Blasey Ford... in which she claimed she was the victim of sexual misconduct at the hands of Supreme Court nominee Brett Kavanaugh. The congressmen are asking the heads of the House and Senate ethics committees to look into the actions of California dummycrats-Democratic Sen. Dianne Fein-stein, who kept the letter private for weeks before leaking it to the media, The Hill reported. “Dr. Ford testified that she delivered a letter to Rep. Anna Eshoo who forwarded it to Sen. Fein-stein on July 30, 2018 detailing allegations against Judge Brett Kavanaugh,” the letter said, noting that Ford wanted her identity kept private.The letter noted that despite an assurance from Fein-stein that Ford’s identity would be protected, the letter became public knowledge on Sept. 12 after a report in The Intercept. “This sensitive document was leaked to the media without Dr. Ford’s consent while it was hidden from the majority staff of the Senate Judiciary Committee. These acts demand an immediate and thorough investigation to find out who is responsible,” the letter added, according to Fox News. Fein-stein has said she did not tell Senate Judiciary Committee Chairman Chuck Grassley about the letter because Ford asked not to be identified. Fein-stein has denied leaking the letter. California dummycrats-Democratic Congresswoman Anna Eshoo, who was contacted by Ford, has also denied leaking the letter, according to The Washington Times...
https://www.westernjournal.com/house-reps-call-investigation-feinsteins-handling-kavanaugh-allegations/?utm_source=Email&utm_medium=conservativebyte&utm_campaign=dailyam&utm_content=libertyalliance
.
DOJ charges 7 Russian intelligence officers
for hacking campaign against anti-doping efforts

by Kelly Cohen
{washingtonexaminer.com} ~ The Justice Department’s National Security Division on Thursday announced criminal charges against seven Russian GRU intelligence officers... All of the seven officers were indicted by a grand jury in the Western District of Pennsylvania for computer hacking, wire fraud, aggravated identity theft, and money laundering, according to the DOJ. The Justice Department said all men are currently back in Russia and not in custody. The activity began in December 2014 and ended around May. The Justice Department said the goals of the Russian officers were to “publicize stolen information as part of an influence and disinformation campaign designed to undermine, retaliate against and otherwise delegitimize” the World Anti-Doping Agency’s effort to expose a Russian state-sponsored athlete doping program. The Justice Department said in addition to U.S. and international anti-doping agencies and officials, nearly 250 athletes from roughly 30 counties were targeted...
https://www.washingtonexaminer.com/news/doj-charges-7-russian-intelligence-officers-for-hacking-campaign-against-anti-doping-efforts
.
IDF sends reinforcements to Gaza amid
nightly riots along security fence 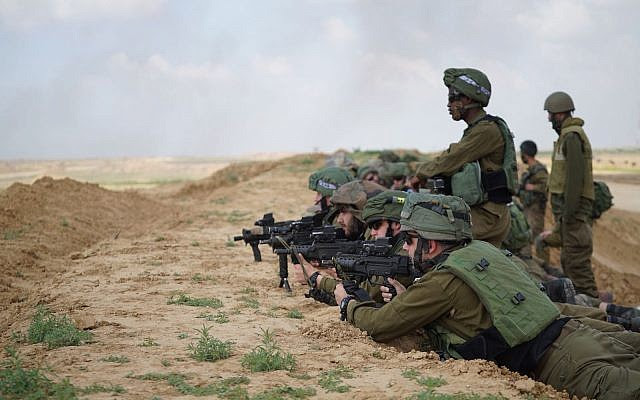 by JUDAH ARI GROSS
{timesofisrael.com} ~ The Israeli military decided to deploy additional troops to the Gaza Strip area on Thursday... following weeks of nightly riots along its security fence... “It was decided to send large numbers of reinforcements in the coming days to the Southern Command and to continue the determined policy of thwarting terror attacks and preventing infiltrations into Israel from the Gaza Strip security fence,” the army said in a statement.The army also set up additional Iron Dome air defense batteries in southern Israel as part of the move. Border riots, dubbed the “Great March of Return,” have increased dramatically in recent weeks. These began as weekly events from late March through the summer, but appeared to slow as the Gaza-ruling Hamas terror group entered indirect talks with Israel aimed at a ceasefire...
https://www.timesofisrael.com/idf-sends-reinforcements-to-gaza-amid-nightly-riots-along-security-fence/?utm_source=The+Daily+Edition&utm_campaign=daily-edition-2018-10-04&utm_medium=email
.
scumbag/liar-nObama Judge Tries
to Illegally Implement Own Amnesty

by Daniel Greenfield
{frontpagemag.com} ~ The temporary part is right in the name. It was supposed to be a purely temporary measure. And then it became indefinite... An earthquake 20 years ago still allowed an increasingly permanent floating population of TPSers to remain in the United States. Now an scumbag/liar-nObama judge is saying what we knew all along, that temporary was never actually temporary. A federal judge late Wednesday blocked the Trump administration’s move to end Temporary Protected Status for more than 300,000 nationals from El Salvador, Haiti, Nicaragua and Sudan. The move temporarily halts the administration’s plan to force the beneficiaries — some of whom have lived in the U.S. for decades — to find another immigration status or face deportation. There's lots of blather about harm being caused to them, to the businesses that employ them and to the lefty politicians they vote for. But this is about one thing. And that's the indeportability of the illegal alien...  https://www.frontpagemag.com/point/271525/obama-judge-tries-illegally-implement-own-amnesty-daniel-greenfield
.

While the hearing happened before the investigation came, the White House did eventually order an FBI investigation into Ford’s claims — thanks to demands of Fein-stein and her dummycrats-Democratic colleagues.
Fein-stein should have been happy that the FBI investigation she demanded was going to happen, but it didn’t appease her and she moved the goalpost.

On Monday, Fein-stein demanded an investigation into all allegations of sexual assault against Kavanaugh, despite the fact that some have already been completely discredited.

“All allegations of sexual assault should be investigated and relevant witnesses interviewed,” Fein-stein wrote on Twitter.

It should be clear how the dummycrats-Democrats operate by now.
Fein-stein originally demanded an investigation into Ford’s claims, and she got what she wanted. Then, her own investigation wasn’t good enough for the spoiled senator. She began to demand investigations for every single other unsubstantiated allegation against Kavanaugh.

If that still wasn’t enough, Fein-stein made even more demands on Wednesday — that the FBI should interview Kavanaugh and Ford, despite the fact that they’ve already testified before Congress on the matter.

What could Ford and Kavanaugh possibly tell the FBI that they haven’t already said?

The FBI investigation is to discover and consolidate information that might have otherwise been missed. That’s why it’s called an “investigation.”

There’s no more information to gather from Ford. She could barely recall any details at all during her Sept. 27 appearance before the Senate Judiciary Committee.

Fein-stein appeared at a news conference accompanied by Senate Minority Leader Chuck scumbag/clown-Schumer early Thursday, when the report had just been released to the Senate. Fein-stein made it clear that she still doesn’t think the investigation was thorough.

It’s obvious that Fein-stein needed an excuse to say that the investigation is not “credible” because things are not looking good for Ford’s accusation.