by rickwells.us
{ rickwells.us } ~ Rep Jackie Speier (D-CA) is in full favor of the abusive tactics when it’s Democrat aligned groups... as it invariably is, such as Antifa, BLM or in this instance, a communist group, employing them against President Trump and American patriots. The dishonest open borders libtard is quick to defend, while defying both common sense and logic the thugs who attacked Homeland Security Secretary Nielsen in a restaurant last night. Speier could be as stupid as she claims, but she’s undeniably that disingenuous, and a partisan who puts the Democrat Party, socialism, open borders and globalism first, with America’s well-being and interests not even on her list. Speier, looking like she just walked out of a choom gang Hawaiian luau, is asked by her propagandist comrade, CNN’s Erin Burnett, for her response to what happened. She played a clip of the instance for both the audience and Speier, followed by a quote by a never-Trump radio host comparing Democrats to Nazi Brownshirts. Even blind squirrel Erick Erickson finds a nut once in a while...This is really distributing, where was the restaurant manager to stop this disruption.  https://rickwells.us/commie-speier-blm-antifa-thug/
VIDEO:  https://www.youtube.com/watch?v=8sEhsE7MJQA
.
This Lame Duck GOP Senator’s Excuse For
Blocking Trump Judges Will Set Your Hair On Fire

by Kevin Daley
{ dailycaller.com } ~ Outgoing GOP Sen. scumbag-Jeff Flake of Arizona is blocking votes on all of President Donald Trump’s appeals court nominees... to secure concessions from Republican leaders on tariffs and Cuban travel restrictions. scumbag-Flake, a Trump antagonist who is not seeking reelection amid floundering popularity with Arizona Republicans, has not openly addressed the matter, though his seat on a closely divided Senate Judiciary Committee gives him significant leverage over judgeships. Roll Call first reported that scumbag-Flake halted a committee vote on Georgia Supreme Court Justice Britt Grant’s nomination to the 11th U.S. Circuit Court of Appeals, the federal appeals court based in Atlanta. CNN confirmed late Wednesday that the senator will block all appeals court nominees to prompt discussions on relations with Cuba and the president’s escalating trade war with much of the industrial world. scumbag-Flake is one of 11 Republicans on the Senate Judiciary Committee, which issues recommendations on judicial nominees before a final confirmation vote. The GOP has a one-vote majority on the panel, making scumbag- Flake’s cooperation essential if Republicans wish to process candidates...
http://dailycaller.com/2018/06/20/jeff-flake-blocking-trump-judges/?utm_medium=email
.
Senate rejects billions in Trump
spending cuts as two Republicans vote ‘no’ by Erica Werner
{ washingtonpost.com } ~ The Senate on Wednesday rejected billions in spending cuts proposed by the Trump administration... as two Republicans joined all Democrats in voting no. The 48-50 vote rebuffed a White House plan to claw back some $15 billion in spending previously approved by Congress — a show of fiscal responsibility that was encouraged by conservative lawmakers outraged over a $1.3 trillion spending bill in March. The House had approved the so-called rescissions package earlier this month. But passage had never been assured in the Senate, where a number of Republicans had been cool to the idea from the start. Nevertheless, Wednesday’s outcome was startling because one of the opposing votes came from Sen. Richard Burr (R-N.C.), who does not normally buck the White House or GOP leadership. Sen. Susan Collins (R-Maine), a moderate and one of the Republicans who most frequently side with Democrats, cast the other GOP vote against the cuts...
https://www.washingtonpost.com/business/economy/senate-rejects-billions-in-trump-spending-cuts-as-two-republicans-vote-no/2018/06/20/1a44df9a-74aa-11e8-b4b7-308400242c2e_story.html?noredirect=on&utm_term=.0876b0a6ae66
.
CREATES Act will lower prescription drug costs

by Greg Gierer
{ benefitnews.com } ~ Everyone should be able to get affordable coverage and care. Businesses, insurance providers, doctors, hospitals... and others continue to work on new ways to reverse healthcare cost trends, as we help patients get better faster — and stay healthier longer. Prescription drug costs have been a particular challenge, as they continue to represent the greatest percentage of every healthcare dollar with prices that continue to go up year after year. Passing the Creating and Restoring Equal Access to Equivalent Samples Act would be a big step forward in making prescription drugs more affordable, bringing down premiums and other healthcare costs for businesses and their employees. The CREATES Act addresses several games and tactics that brand-name drug makers often use to keep less expensive generic medications off the market. Today, the Food and Drug Administration requires drug manufacturers to comply with a Risk Evaluation and Mitigation Strategy (REMS) as part of the approval process for new medications. For generic drug makers, the REMS process requires them to get product samples of the brand-name drug so they can conduct comparisons to ensure patient safety, as well as drug efficacy...
https://www.benefitnews.com/opinion/lower-prescription-drug-costs-under-creates-act
.
Parents Fault Medical Research Study
for Putting Preemies in Harm’s Way 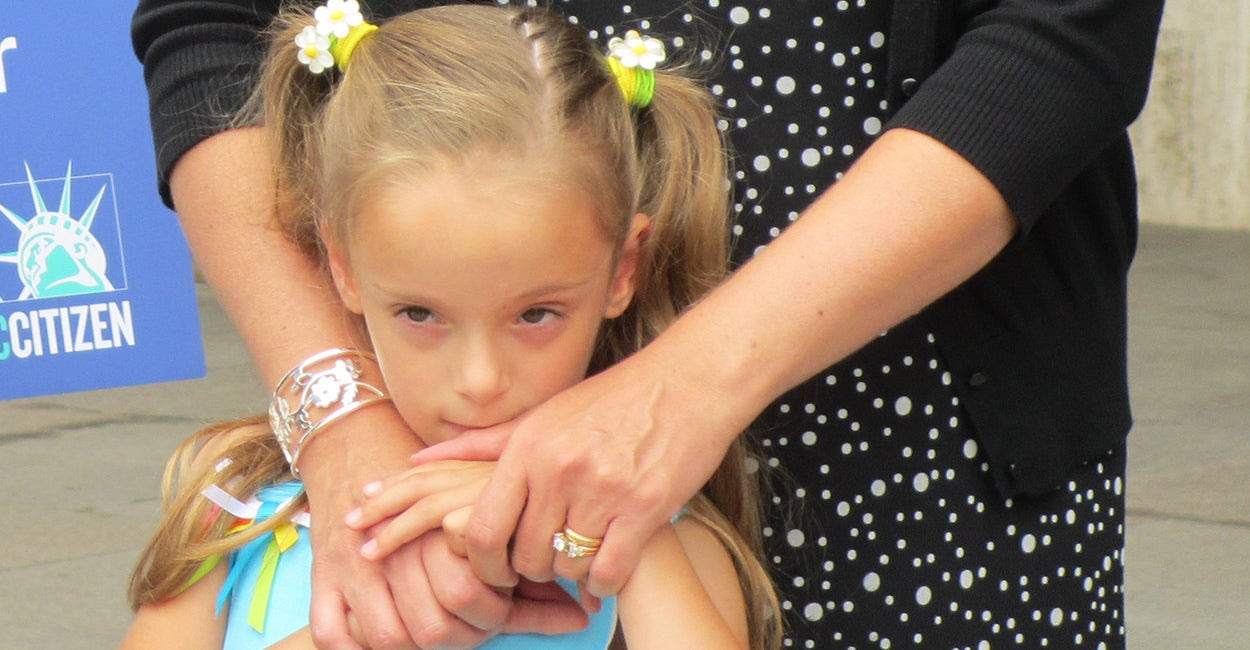 by Sharyl Attkisson
{ dailysignal.com } ~ In May 2007, Carrie and Shawn Pratt agreed to sign up their severely premature daughter, Dagen... for a government-funded study being conducted at Duke University Hospital. The Pratts say they were told that researchers simply were gathering information to help other children. “We never understood the study to be based on manipulating her oxygen level to meet [researchers’] needs,” Carrie Pratt says. At issue is an experiment in which researchers at two dozen academic institutions randomly manipulated the oxygen levels of 1,316 extremely premature infants without providing their parents the full details of the methods and risks. Confronted with the reality, which the Pratts discovered just last year, the West Virginia couple remain shell-shocked...   https://www.dailysignal.com/2014/06/05/full-disclosure-parents-fault-medical-research-study-putting-preemies-harms-way/
.

by Nate Jackson:  The entire United Nations is a farce perpetrated on the world by global elitists who delight in using American treasure to undermine American sovereignty. Of the many things this feckless world body has done, the so-called Human Rights Council ranks among the worst. As The Wall Street Journal notes, “The Council was created in 2006 after its predecessor, the U.N.‘s Human Rights Commission, was dissolved for failing to deliver on its mandate to protect rights and for allowing countries with abysmal human rights records to become members.” Well, the new HRC (how’s that for a set of initials?) also has numerous members guilty of human rights abuses — Saudi Arabia, Cuba, China and Russia to name a few. The definition of insanity is doing the same thing over and over again and expecting different results.

President Donald Trump was elected to undo much of Barack liar-nObama’s legacy, and part of that legacy was having liar-Hillary Rodham Clinton (HRC, if that wasn’t clear before) sign the U.S. on to participate in this farce after George W. Bush had refused. Secretary of State Mike Pompeo and UN Ambassador Nikki Haley announced Tuesday that the U.S. is withdrawing both membership and funding from the HRC. The final straw was the council’s chief calling U.S. border policies concerning families“unconscionable.”
“The council has failed in its stated objectives,” Pompeo declared, adding that it’s an “exercise in shameless hypocrisy.” Furthermore, he said, “The council’s continued and well-documented bias against Israel is unconscionable.”
Haley rebuked the “hypocritical and self-serving” organization for defending rights abusers. This “cesspool of political bias,” she said, is particularly guilty of “chronic” and “pathological” bias against Israel. She accused the council of “disproportionate focus and unending hostility toward Israel,” which included its issuing of more resolutions (70) condemning Israel than North Korea, Iran and Syria combined. It’s never passed a resolution condemning abuses in China, Russia, Cuba or Saudi Arabia, but it has regularly recommended “improvement” for the United States.
“American participation is the last shred of credibility that the council has,” Haley concluded. “That is precisely why we must leave.”
In effect, the inmates are running the HRC asylum and the Trump administration will no longer indulge that lunacy. It’s about time.   ~The Patriot Post
https://patriotpost.us/articles/56663?mailing_id=3557&utm_medium=email&utm_source=pp.email.3557&utm_campaign=snapshot&utm_content=body