by Marissa Martinez
{aim.org} ~ YUMA, ARIZONA – On Monday Ajo Border Patrol assigned to the Lukeville immigration checkpoint arrested an illegal immigrant and two U.S. citizens in a smuggling attempt... Border Patrol used video surveillance to  confirm the smuggling attempt started with the group cutting the wire along the border fence near the Lukeville Port of Entry. As border patrol agents were reviewing the surveillance footage the individuals illegally entered into the U.S. and got into a parked Dodge SUV that was waiting for them. As Air and Marine Operations patrol tailed the car agents while agents at an immigration inspection checkpoint “performed an immigration inspection on the three occupants, discovering the rear passenger, a 40-year-old Mexican male, was illegally present in the country and attempted to use fraudulent immigration documents.” The driver of the vehicle, a 36-year-old female, and the front seat passenger, a 32-year-old male, were arrested and charged on federal human smuggling charges. The back set male is being processed for immigration violation charges...  https://www.aim.org/aim-investigates/from-the-border-immigrants-cut-through-border-wall-fence-two-charged-with-human-smuggling/?utm_source=AIM+-+Daily+Email&utm_campaign=Daily%20Email%20Mar-21-2019&utm_medium=email&utm_source=AIM+-+Daily+Email&utm_campaign=e981c6196e-email061114_COPY_01&utm_medium=email&utm_term=0_c4ddfc8d9d-e981c6196e-224223533
.
Dallas Billboard Company Refuses My
Ad Offering Help to At-Risk Muslim Girls 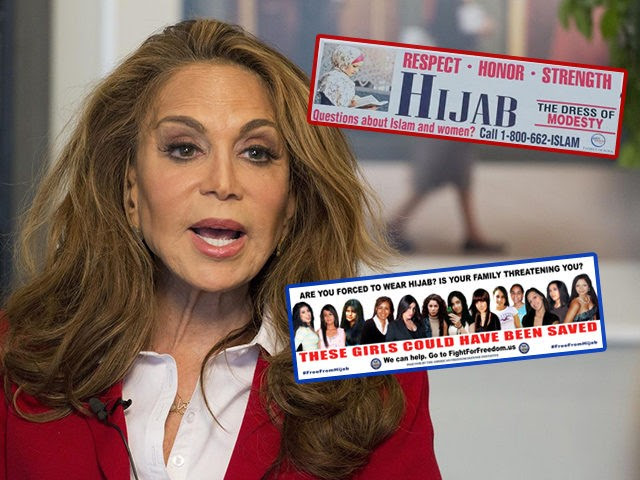 by Pamela Geller
{breitbart.com} ~ It is quickly becoming impossible to criticize any aspect of Islam, no matter how violent or repressive, in the public square... My latest billboard battle is a case in point. A month ago, a number of concerned Texans wrote me about a hijab promotion campaign on Outfront previously known as CBS Outdoor billboards running in Dallas. Local media wrote it up in glowing terms, of course. KERA News ran a puff piece with the enthusiastic headline “Billboard Campaign In Dallas Aims To Dispel Misconceptions About Islam And The Hijab.” It featured a large photo of the billboard itself, which read “Respect – Honor – Strength. HIJAB. The Dress of Modesty.” It also offered a phone number for those with “questions about Islam and women.” Not a word, of course, about the many girls and women who have been threatened and even killed for not wearing the hijab in a practice commonly known as “honor killing.” This ad’s use of the word “honor” is especially cynical. And then, of course, comes the post-ad followup describing horrific responses to the ad. The New York Post just ran yet another Muslims-are-victims-of-Islamophobia piece: “Muslim call center gets hundreds of hate calls for promoting hijabs on billboard.” American media companies run these ads without hesitation, for fear of violating Islamic mores and traditions and appearing “Islamophobic” — a thought-crushing device designed to silence criticism of Islam, thereby enforcing sharia. The ads garner media attention, paint Muslims as victims, admonish Americans for things they haven’t done, and decry a non-existent epidemic of Islamophobia...
https://www.breitbart.com/the-media/2019/03/18/pamela-geller-dallas-billboard-company-refuses-my-ad-offering-help-to-at-risk-muslim-girls/
.
scumbag/liar-nObama-Appointed Judge Blocks Wyoming Oil Lease Sale Over ‘Climate Change’ 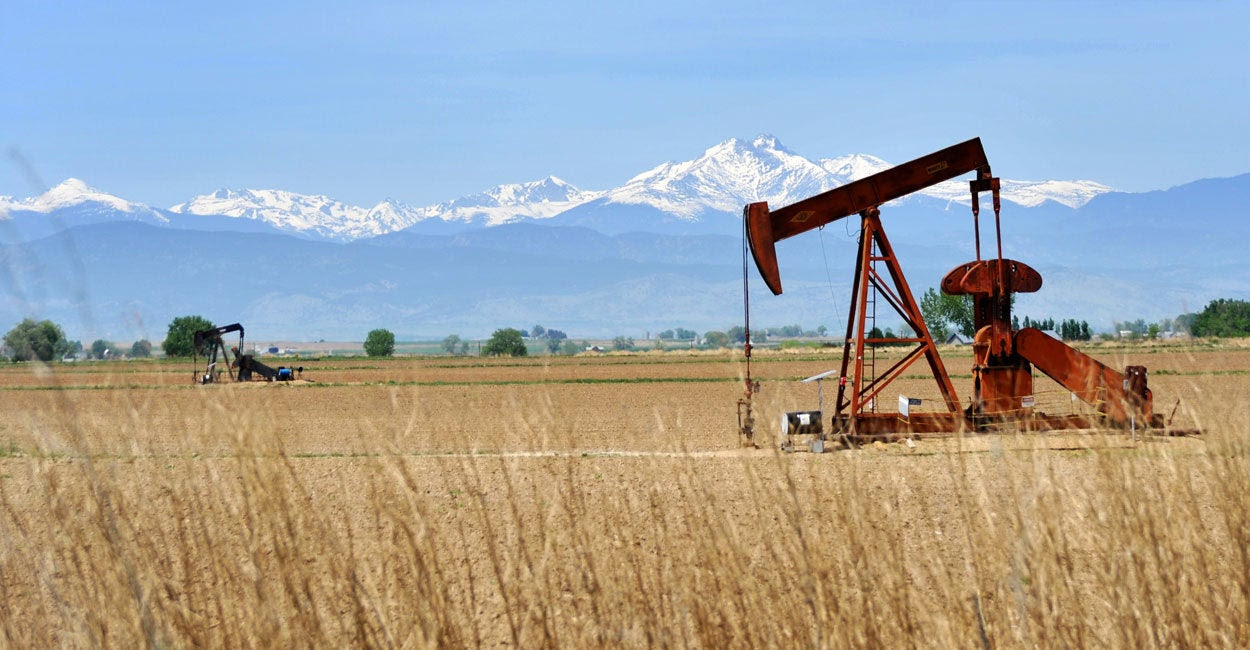 by Tim Pearce
{dailysignal.com} ~ A federal judge temporarily blocked new oil lease auctions in Wyoming on Tuesday after finding the Department of the Interior “did not sufficiently consider climate change” when proposing the lease sales... The Washington Post reports. Washington, D.C., District Court Judge Rudolph Contreras ruled the government violated federal law and did not fully study the environmental impact of oil development on 300,000 acres of federal land.Contreras did not void leases already sold, but he ordered the Bureau of Land Management to redo the environmental reviews used to approve the leases. The BLM must include in the redone reviews the effects of each new oil well on overall emissions in the U.S., including the pumped oil’s downstream effects, Contreras’ ruling said. “Given the national, cumulative nature of climate change, considering each individual drilling project in a vacuum deprives the agency and the public of the context necessary to evaluate oil and gas drilling on federal land before irretrievably committing to that drilling,” he wrote, according to the Post.Former President Barack scumbag/liar-nObama appointed Contreras to the federal bench in March 2012. Contreras’ ruling came after the activist groups WildEarth Guardians and Physicians for Social Responsibility sued the federal government over the lease sale in 2016...
https://www.dailysignal.com/2019/03/21/obama-appointed-judge-blocks-wyoming-oil-lease-sale-over-climate-change/?utm_source=TDS_Email&utm_medium=email&utm_campaign=CapitolBell&mkt_tok=eyJpIjoiTURkaVpqWTJZamRsWW1WaiIsInQiOiJOaG42cVlmRklQU2JmNUFCMFFGSzFBRFBVRElZTkd5NjFKbTgxejFzeERYWVB5ajA4ZWRqQkUydEwwVzNvemg4aG9OS3RITjZTbENSUmRYT2h6NWdcL0x1bGIyQ1lHcWhzM1JRVFpQaFRjMG5vcXNrT1VCcEZnXC9jWGtCQndJYUY0In0%3D
.
Cesar Sayoc pleads guilty to sending
bombs to Democrats, CNN 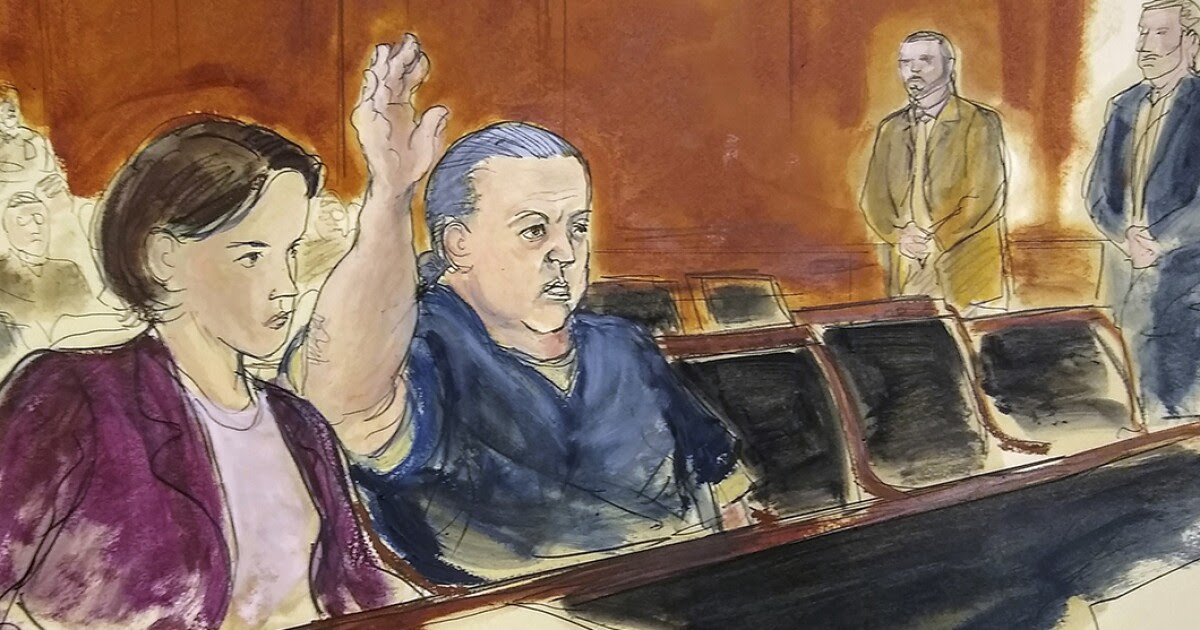 by Caitlin Yilek
{washingtonexaminer.com} ~ Cesar Sayoc pleaded guilty Thursday to sending pipe bombs to high-profile Democratic critics of President Trump and media figures... The Florida man entered the plea Thursday before a federal judge in New York. He was set to go on trial this summer. Sayoc faced charges that he mailed the explosive devices to more than a dozen targets, including former President Barack scumbag/liar-nObama, former Vice President loose lips-Joe Biden, Bill and Hillary scumbag/liar-Clinton, former CIA Director John scumbag/commie-Brennan, former Director of National Intelligence scumbag-James Clapper, former Attorney General scumbag-Eric Holder, four members of Congress, Democratic megadonor scumbag-George Soros, and Trump critic and actor scumbag-Robert de Niro. None of the bombs exploded, but it increased tension in the  weeks leading up to the 2018 midterm elections. Sayoc has been held without bail since he was arrested in October in Florida. At the time of his arrest, he was living in a van covered in Trump stickers.
https://www.washingtonexaminer.com/news/cesar-sayoc-pleads-guilty-to-sending-bombs-to-democrats-cnn?utm_source=breaking_push&utm_medium=app&utm_campaign=push_notifications&utm_source=WEX_Breaking%20News%20Alert_03/21/2019&utm_medium=email&utm_campaign=WEX_Breaking%20News
.
CNN Misleads in Reporting on
James Madison and the Electoral College

by Carrie Sheffield
{aim.org} ~ CNN’s New Day misleadingly suggested that founding father James Madison was diametrically opposed to the Electoral College, but the network left out key facts about the truth on Madison’s views... “You won’t believe who really hated the Electoral College probably even more than Elizabeth dinky-Warren,” said CNN anchor Erica Hill. “Here’s a hint: it’s a man who wore a wig and helped write the constitution.” “Radical left-wing fantasy?” “Or as American as apple pie?” “The Electoral College has been debated since the days of James Madison, who called it ‘evil.,’” CNN tweeted from its official account. “So could it actually be abolished? @JohnAvlon explores that in today’s #RealityCheck.” David Martosko, political editor for the Daily Mail, responded on Twitter to the CNN claim about Madison. “Huh? Madison basically created the Electoral College,” Martosko tweeted. “What he called ‘evil’ was Thomas Jefferson’s habit of using slave populations as a way to “weight” electoral vote allocations, and his trading favors for ‘winner-take-all’ results that benefited him.” Jarrett Stepman, a Daily Signal contributor at the Heritage Foundation, offered more context about the Madison quote...  https://www.aim.org/aim-column/cnn-misleads-in-reporting-on-james-madison-and-the-electoral-college/?utm_source=AIM+-+Daily+Email&utm_campaign=Daily%20Email%20Mar-21-2019&utm_medium=email&utm_source=AIM+-+Daily+Email&utm_campaign=e981c6196e-email061114_COPY_01&utm_medium=email&utm_term=0_c4ddfc8d9d-e981c6196e-224223533
.

Political Editors:  House Democrats reintroduced their so-called “Equality Act” last week. The bill would add “sexual orientation” and “gender identity” to the protected classes under the Civil Rights Act of 1964. However, as The Heritage Foundation explains, “Where the original Civil Rights Act of 1964 furthered equality by ensuring that African-Americans had equal access to public accommodations and material goods, the Equality Act would further inequality by penalizing everyday Americans for their beliefs about marriage and biological sex. Similar sexual orientation and gender identity laws at the state and local level have already been used in this way.”

Frankly, the “Equality Act” would step all over Americans’ First Amendment rights. Heritage further highlights five specific groups who would be harmed should the act ever become law: employers and workers, medical professionals, parents and children, women, and nonprofits and volunteers. In other words, the law would directly impact virtually everyone living in America.

This ill-conceived legislation is the kind of heavy-handed, government-forced thinking that many have long warned against. The law would not merely protect those individuals expressing new sexual “norms” or gender “identity” from suffering physical harm; rather it seeks to force all Americans to accept and embrace leftist ideology. It would compel speech. We have already seen examples of this reality, where in Virginia just last year a high-school teacher was fired for his refusal to address a gender-dysphoric individual by her preferred pronoun (him). The teacher argued that to use a pronoun contrary to the biological sex of the student went against his faith, as it would be engaging in a lie. He noted that he believed God created human beings and furthermore determined their biological sex, and therefore the teacher was not free to ignore this reality or pretend otherwise.

Democrats claim the law would ban discrimination, but the reality is that it would simply insert a new and much more dangerous discrimination — a kind of discrimination that runs counter to the Liberty all Americans share under the Constitution. It would effectively create a more “equal” classification of individual whose status would trump the freedom and rights of others. The truth is, this law is not about equality at all; it’s about using the power of government to force others into conforming to the immoral ideals of a protected class. It is in fact evil.   ~The Patriot Post

https://patriotpost.us/articles/61863?mailing_id=4144&utm_medium=email&utm_source=pp.email.4144&utm_campaign=snapshot&utm_content=body
E-mail me when people leave their comments –
Follow