by rickwells.us
{ rickwells.us } ~ Amid reports that President Trump is exploring the possibility of removing security clearances from former top liar-nObama administration officials... it may be instructive to take a closer look at former Director of National Intelligence scumbag-James Clapper’s recently released book. Inside the work, titled “Facts and Fears,” scumbag-Clapper reveals that he feels it is his “duty” to speak out publicly against Trump by writing the book and doing television appearances, especially on CNN where he is a contributor. He lists a litany of anti-Trump charges, and repeatedly makes clear that his public appearances are aimed at countering Trump’s presidency. Explaining why he decided to make public pronouncements against Trump after leaving the liar-nObama administration, scumbag-Clapper writes that “speaking critically of our current president is counter instinctive and difficult for me to do, but I feel it is my duty.”...Hogwash, you can disagree with him but you are being disrespectable by attacking him.   https://rickwells.us/clapper-attack-trump/
.
Who Leaked the Trump Tape? 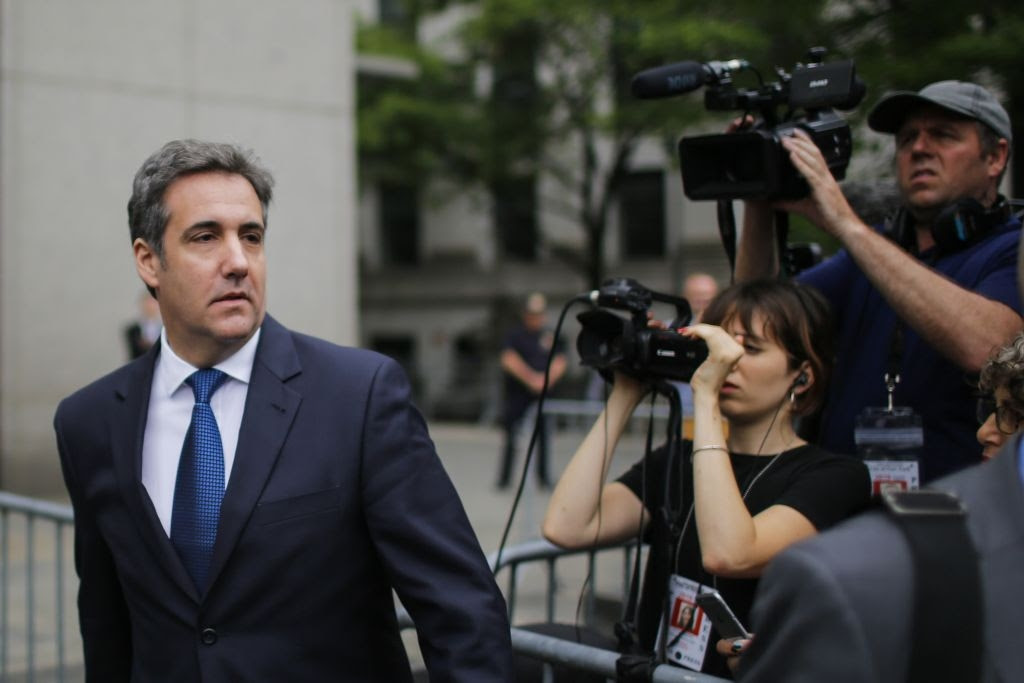 by Alan M. Dershowitz
{ gatestoneinstitute.org } ~ Someone leaked the lawyer/client confidential tape containing a conversation between President Donald J. Trump and his lawyer Michael Cohen... A former judge, assigned by the presiding judge to evaluate the seized tapes, reportedly concluded that this conversation was privileged. Yet someone leaked their contents. The President Trump's current lawyer, Rudy Giuliani, then waived the privilege as to that tape. He said he never would have waived it had its existence and content not been improperly leaked. So, the question remains: Who leaked this privileged material? If it was anyone in the Trump camp, there would be no violation of confidentiality, as the privilege belongs to the client, namely Trump, who can waive it. But no one else, most especially his lawyer, may properly waive the privilege. And Giuliani has categorically denied that it was leaked by Trump or anyone on his behalf. Indeed, he has expressed outrage at the leak. Whom does that leave? Cohen is an obvious suspect, although I am confident that his excellent and experienced lawyer, Lanny Davis, would not have done so. Perhaps Cohen himself, who ran into Michael Avenatti at a restaurant, told him about the tape. We simply do not know...Could it of been Mueller's team or himself?
https://www.gatestoneinstitute.org/12767/who-leaked-the-trump-tape
.
Trump Slams Cohen Claim That He Knew
of Trump Tower Meeting With Kremlin Lawyer 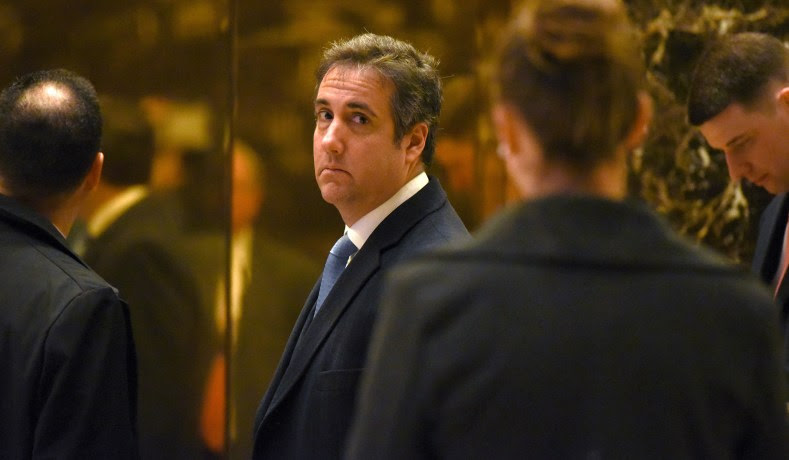 by MAIREAD MCARDLE
{ nationalreview.com } ~ President Trump on Friday slammed his longtime lawyer’s claim that he knew about a Trump Tower meeting during the campaign between... his son Donald Trump Jr. and a Kremlin-associated lawyer who promised damaging information on liar-Hillary Clinton. “I did NOT know of the meeting with my son, Don jr,” the president wrote on Twitter early Friday. “Sounds to me like someone is trying to make up stories in order to get himself out of an unrelated jam Taxi cabs maybe?.” Trump’s former personal attorney, Michael Cohen, a target in Special Counsel Robert Mueller’s Russia investigation, accused the then-presidential candidate of having advance notice of the infamous June, 2016 meeting, CNN reported. He is reportedly willing to make that claim to Mueller’s investigators. Trump’s mention of taxi cabs refers to a federal investigation into Cohen’s business affairs, including his owning New York City taxi cab medallions...
https://www.nationalreview.com/news/michael-cohen-trump-tower-meeting-claims-president-denies/
.
North Korea Repatriates Remains of Missing Service Members

by sundance
{ theconservativetreehouse.com } ~ A U.S. military transport plane flies to an airfield in North Korea’s northeastern city of Wonsan to bring the remains to Osan air base in South Korea... Soldiers in dress uniforms with white gloves were seen slowly carry 55 small cases covered with the blue-and-white United Nations insignia, placing them one by one into silver vans waiting on the tarmac in Osan: At their historic meeting in Singapore, President Donald J. Trump and Chairman Kim Jong Un took a bold first step to achieve the complete denuclearization of the Korean Peninsula, transform relations between the United States and North Korea, and establish enduring peace. Today, the Chairman is fulfilling part of the commitment he made to the President to return our fallen American service members. We are encouraged by North Koreas actions and the momentum for positive change. A U.S. Air Force C-17 aircraft containing remains of fallen service members has departed Wonsan, North Korea. It is accompanied by service members from United Nations Command Korea and technical experts from the Defense POW/MIA Accounting Agency. The C-17 is transferring the remains to Osan Air Base, where a formal repatriation ceremony will be held on August 1...   https://theconservativetreehouse.com/2018/07/27/north-korea-repatriates-remains-of-missing-service-members/
VIDEO:  https://www.youtube.com/watch?v=nzge6GUkJbU
.
Dershowitz: 'We Need Less Redaction, More Transparency'
by Eric Mack
{ newsmax.com } ~ Ripping the redactions of the recently released FISA documents, civil liberties expert Alan Dershowitz denounced the "flawed" special counsel process that has rendered "more questions than answers."... "The process is a very flawed one, and the more the American people know about it, the more distressed they are at how special counsels operate, particularly in the context of political elections," Dershowitz told Fox News' "Sunday Morning Futures." "We need to know more not less. We need less redaction, more transparency, and we have the right to judge for ourselves whether or system of justice is operating fairly, within the Constitution, and consistent with civil liberties. "Right now there are more questions than answers." The Justice Department released a heavily redacted 400-plus-page document Friday, detailing the justifications to seek a warrant to wiretap Carter Page, a U.S. citizen loosely attached to the Trump campaign...
https://www.newsmax.com/politics/dershowitz-fisa-special-counsel-flawed-process/2018/07/22/id/873098/?oRef=idealmedia
VIDEO at the site.
.

The Other Russian Hacking — the Electrical Grid

by Jordan Candler:  It goes without saying that election meddling is hardly the only threat posed by Russian operatives. According to a new Wall Street Journal report, “Hackers working for Russia claimed ‘hundreds of victims’ last year in a giant and long-running campaign that put them inside the control rooms of U.S. electric utilities where they could have caused blackouts, federal officials said. They said the campaign likely is continuing.”

The hackers were members of a group known as Dragonfly or Energetic Bear, which is backed by the Kremlin. The Journal explains that the group “broke into supposedly secure, ‘air-gapped’ or isolated networks owned by utilities with relative ease by first penetrating the networks of key vendors who had trusted relationships with the power companies, said officials at the Department of Homeland Security.” One DHS official even stated that the hackers “got to the point where they could have thrown switches.” Translation: Portions of our nation’s utilities — which were previously flagged for inadequate security measures — were effectively in the hands of foreign enemies.
DHS began alerting utility executives to the hazards posed by these specific Russian hackers four years ago. By 2016, the Russian incursion on U.S. utilities was underway, though Russia refuses to admit culpability — which is just as believable as that nation’s pleading innocence on election meddling. Investor’s Business Daily suggests“it’s clear the U.S. needs to increase its focus on this threat.” The risk isn’t hyperbole, after all. As IBD goes on to note: “Those who think it can’t happen here need to think again. In December 2015, Russia launched an attack on Ukraine’s power grid that led to electricity outages for hundreds of thousands of people.”
Yes, election meddling is serious business and requires a forceful response. But hacking into America’s utility companies is an even more pressing and far-reaching concern — particularly when, as IBD points out, “there is no indication that [Russian meddling] had a significant impact on any election here in 2016.” Some dummycrats-Democrats will no doubt remain unconvinced, so in an effort to persuade them, remind them that they won’t be able to keep spewing “Russia stole the election” nonsense on national television if those same Russians end up causing blackouts. That’ll get ‘em moving.