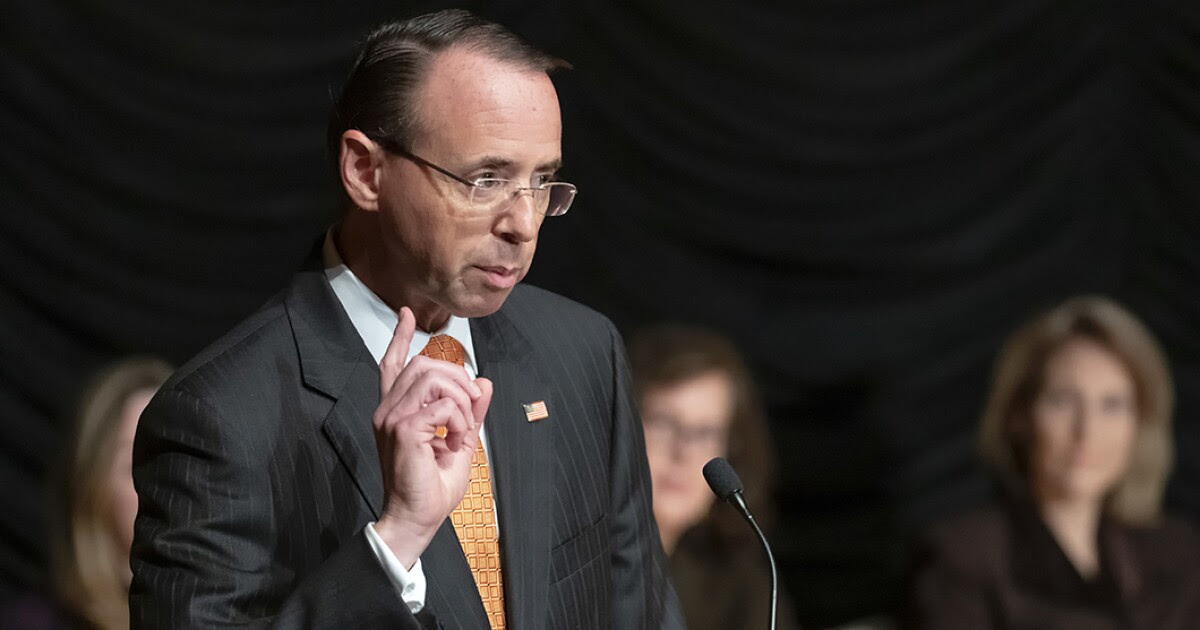 by Naomi Lim
{washingtonexaminer.com} ~ Deputy Attorney General Rod Rosenstein will sit down next week with top House Republicans and dummycrats-Democrats for a transcribed interview... House Judiciary Committee Chairman Bob Goodlatte, R-Va., and House Oversight Committee Chairman Trey Gowdy, R-S.C., announced the interview in a statement Thursday. The release detailed how they and their respective dummycrats-Democratic ranking members, Rep. Jerry Nadler, D-N.Y., and Rep. scumbag-Elijah Cummings, D-Md., would ask the Justice Department's No. 2 questions on Oct. 24 in a secure setting under oath. "The transcript will then be reviewed by the Intelligence Community to avoid the public dissemination of classified or otherwise protected information," Goodlatte and Gowdy wrote. "Once cleared, the transcript will be publicly available." The announcement comes as key House GOP lawmakers continued to needle Rosenstein to appear before congressional investigators, frustrated that he gave an interview to the Wall Street Journal Wednesday while postponing a meeting with them.  But House Freedom Caucus Chairman Mark Meadows, R-N.C., ratcheted up the rhetoric earlier Thursday by claiming in recent days he had learned information that warranted Rosenstein stepping down immediately. The interview will likely include a line of inquiry regarding reports Rosenstein considered wearing a wire to record conversations with President Trump, as well as rallying Trump cabinet members to remove the president from office using the 25th Amendment. Rosenstein has pushed back on the allegations.
https://www.washingtonexaminer.com/news/rosenstein-to-talk-to-top-house-lawmakers-under-oath?utm_source=WEX_Breaking%20News%20Alert_10/18/2018&utm_medium=email&utm_campaign=WEX_Breaking%20News
.
Congressional Testimony: James Baker Today, Nellie Ohr Tomorrow –
Special Session for Rosenstein Next Week

by sundance
{theconservativetreehouse.com} ~ Former FBI chief legal counsel James Baker appeared before a joint committee in congress today for his second round of questioning about the DOJ and FBI activity... during the 2016 presidential election.  Nellie Ohr is scheduled to appear tomorrow. Previously James Baker informed the committee of his contacts with Michael Sussmann, a lawyer representing the dummycrats-DNC and liar-Clinton campaign, and the objectives of using opposition research provided by the dummycrats-DNC as evidence to support a politically motivated FBI investigation. Mrs. Nellie Ohr, scheduled to testify tomorrow, was hired by Glenn Simpson of Fusion-GPS to coordinate with another subcontractor for the writing of opposition research which became known as the Steele Dossier.  Like the information provided by the dummycrats-DNC through Sussmann, the Steele Dossier was also used as evidence by the FBI against their political target, Donald Trump. {Go Deep on Nellie} The latest development now has Deputy Attorney General Rod Rosenstein agreeing to a very limited and very controlled interview by only the chairmen of the joint committee on October 24th...
https://theconservativetreehouse.com/2018/10/18/congressional-testimony-james-baker-today-nellie-ohr-tomorrow-special-session-for-rosenstein-next-week/
VIDEO:  https://www.youtube.com/watch?v=UPU0p7wm3-o
.
Texas dummycrats-Dems ask noncitizens to register to vote,
send applications with citizenship box pre-checked 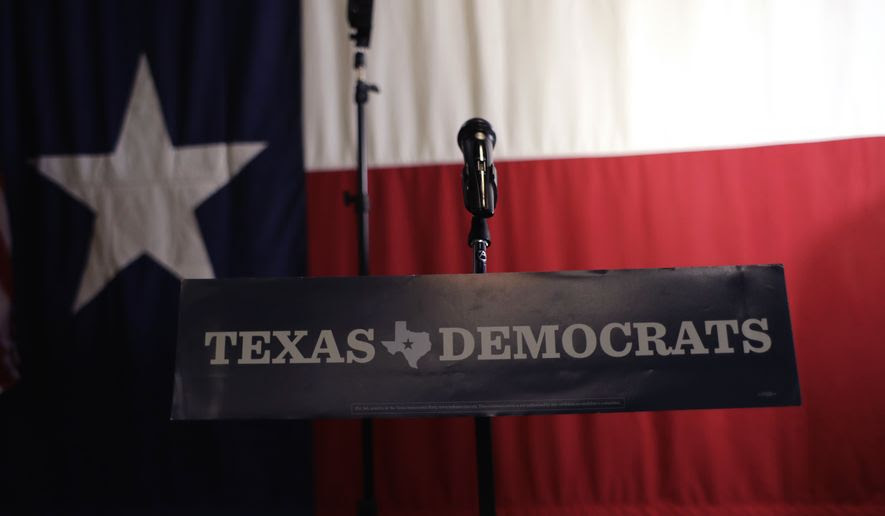 by Stephen Dinan
{washingtontimes.com} ~ The Texas dummycrats-Democratic Party asked non-citizens to register to vote... sending out applications to immigrants with the box citizenship already checked “Yes,” according to new complaints filed Thursday asking prosecutors to see what laws may have been broken. The Public Interest Legal Foundation alerted district attorneys and the federal Justice Department to the pre-checked applications, and also included a signed affidavit from a man who said some of his relatives, who aren’t citizens, received the mailing. “This is how the Texas dummycrats-Democratic Party is inviting foreign influence in an election in a federal election cycle,” said Logan Churchwell, spokesman for the PILF, a group that’s made its mark policing states’ voter registration practices. The Texas secretary of state’s office said it, too, had gotten complaints both from immigrants and from relatives of dead people who said they got mailings asking them to register. Texas Gov. Greg Abbott vowed to investigate...
https://www.washingtontimes.com/news/2018/oct/18/texas-democrats-ask-noncitizens-register-vote/
.
The American Legion Is Asking The Supreme Court
To Protect A Cross-Shaped War Memorial

by Kevin Daley
{dailycaller.com} ~  The American Legion and a Maryland planning commission are asking the U.S. Supreme Court to protect a cross-shaped World War I memorial... after the 4th U.S. Circuit Court of Appeals found the monument violates the Constitution. Supporters of the petition say the 4th Circuit’s decision compromises war memorials across the country, including those at Arlington National Cemetery. Should the high court take the case, it would likely mark the new conservative majority’s first foray into the culture wars. The American Legion erected a 40-foot tall memorial called the “Peace Cross” in Bladensburg, Maryland, in 1925. A plaque at the base of the monument lists the 49 war dead of Prince George’s County and a quotation from President Woodrow Wilson. The crux of the cross is emblazoned with the seal of the Legion, and the words “valor, endurance, courage, and devotion” appear on each face. In the years following its installation, other memorials to county veterans were raised in the Peace Cross’s vicinity. That collection of statuary has since been designated Veterans Memorial Park...The 4th Circuit Court is a liberal court and after 70 years the cross is unconstitutional. Boy they are sick.
https://dailycaller.com/2018/10/18/supreme-court-peace-cross-wwi/?utm_medium=email
.
Red Harvest, 2018

by Steve Grammatico
{americanthinker.com} ~ It may take until November 7 for dummycrats-Democrats to realize they have accomplished what many thought impossible: wrest from the GOP the title, “The Stupid Party.”... “All politics is local,” supposedly opined the late House Speaker, Tip O’Neill. True perhaps in his day, before the advent of cable TV and social media. An updated adage might read, “All politics is local, except when it’s nationalized.” Case in point: dummycrats-Democrats have made the upcoming midterms a referendum on Trump and Judge Kavanaugh. They may regret doing so.  For months, House Minority Leader sick-Nancy Pulosi and Senate Minority Leader Chuck scumbag/clown-Schumer have been giddy about their chances of taking the House and possibly the Senate on November 6. That confidence was bolstered by the ongoing dirty cop-Mueller probe and then the Kavanaugh hearings, with Senate Judiciary Committee dummycrats-Democrats assuming, whatever the outcome, their posturing as truth-seekers unmasking evil would energize the base and play well even in Peoria. But political calculations are often self-delusional constructs born of wishful thinking. For example, in 2008 I believed the far-left community organizer would lose to the elder statesman/military hero, rino-John McCain. But a personable and well-spoken scumbag/liar-nObama appeared thoughtful and open to views from all quarters.  Media complicity and rino-McCain’s deferential campaign assured voters’ ignorance of scumbag/liar-nObama’s actual political bent, so they took a flyer on a blank slate.  Unfortunate from my point of view, but understandable...
https://www.americanthinker.com/articles/2018/10/red_harvest_2018.html
.

.
The Enemy of My Enemy Is Likely Just Another Enemy

by John J. Bastiat:  Contrary to the Pollyanna foreign policy of the previous administration that assumed a “reset” was possible with Russia, that a World Apology Tour in which bowing to despots and other morally corrupt leaders was not only appropriate but also long overdue, and that “spreading democracy” (think: “Arab Spring” and the current conflagration in Syria) supersedes U.S. national security interests — to include regional stability in the Middle East and prevention of mass loss of life — the Trump administration actually “gets” foreign policy. This despite the leftover leftist antibodies infesting what ostensibly is known as the “State Department.” Trumpian foreign policy implicitly realizes that unlike the age-old adage, “The enemy of my enemy is my friend,” that “friend” is more likely yet another enemy.      Perhaps it’s the case that we should treat a current enemy-of-our-enemy somewhat better than an enemy, but rest assured this “friend” does not have the best interests of the U.S. in mind.

Nowhere is this fact more apparent than in the unfolding of recent events, in which American pastor Andrew Brunson was released after two years’ unjust imprisonment in a Turkish jail, while at nearly the same hour U.S. resident and Saudi dissident Jamal Khashoggi was brutally tortured and slain in the Saudi consulate in Turkey.
Neither Turkey nor Saudi Arabia has been the best friend of the U.S. over the years, but the U.S. nonetheless has looked the other way on myriad occasions during the more provocative acts by each, all for the sake of international comity and stability, not to mention the use of both countries’ soil for U.S. basing at various times past. Turkey’s apparent on-again-off-again status as a NATO ally under despotic President Recep Erdogan’s reign, along with Saudi Arabia’s questionable role in events spanning from the first World Trade Center bombing in 1993 and the 9/11 attacks to the present, both have strained relations with the U.S.
Turkey released Pastor Brunson only after President Donald Trump directed the Treasury Department to apply economic pressure on Turkey under the Global Magnitsky Act, resulting in the precipitous fall of the Turkish lira. President Trump followed up by threatening to impose draconian tariffs on Turkish aluminum and steel. The threats and pressure from the U.S. ultimately forced Erdogan to release the pastor.
As for the “disappearance” of dissident Jamal Khashoggi in the Saudi consulate in Turkey, Turkish authorities claim to have a gruesome recording purported to be from Khashoggi’s Apple watch — a recording Khashoggi had set up to be transmitted to his wife, who was waiting for him in a car outside the consulate. While President Trump wisely urged calm until the exact details of the incident are known, Saudi Arabia’s role will undoubtedly be severely scrutinized at least by Congress, among others. Potentially at stake if Saudi Arabia is shown to be holding a smoking gun are an arms deal for upkeep and modernization of the Kingdom’s F‑15 fleet — reportedly worth over $100 billion — and the Saudis’ role in holding Iran at bay as a regional power with hegemonic aspirations. The latter is, of course, far more important. The subsequent lowering of Saudi Arabia’s esteem as a U.S. ally would have grave implications, destabilizing the entire region even further and sending shockwaves throughout world oil markets.
For its part, Iran has shown itself to be a truly capable enemy of Liberty generally and of the U.S. particularly. It is fomenting rebellions in Saudi Arabia and Yemen, funding proxy wars against the U.S. and its allies in Syria and Lebanon, and actively supporting the dismantling of U.S. victories in Iraq. Without strong Saudi support Iran will undoubtedly continue to attempt to establish regional dominance, further complicating attainment of U.S. national security interests in the Middle East.
What’s the moral of the story? Simple: When it comes to the question of whether to impose our value set on other nations, Moral Number One is, “U.S. vital national security interests come first. Period.” President Trump tacitly nodded to this reality in a recent “60 Minutes” interview, telling CBS’s Lesley Stahl that while he believed Russian President Vladimir Putin has likely has been involved in many assassinations and poisonings tied to Russia, “I rely on them; it’s not in our country.” It’s a blunt statement, but in the current world in which each nation is viewed as sovereign and no nation (theoretically, anyway) has the right to intervene in the internal affairs of another, the first priority of every nation is to protect its vital national security interests — the U.S. is no different in this regard from any other. Teeing off into other nations without a clear national security interest at stake and under the ill-fitting guise of World Morality Police helps no one.
The bottom line is that in a world overpopulated with enemy-of-my-enemy “friends,” tolerating localized despotism, state-sponsored dissident assassinations, and a host of other evils is the filthy price the U.S. pays as a part of the larger goal to keep its shores free of state-sponsored terrorists and impacts of worldwide instabilities.

https://patriotpost.us/articles/58932?mailing_id=3803&utm_medium=email&utm_source=pp.email.3803&utm_campaign=snapshot&utm_content=body
E-mail me when people leave their comments –
Follow