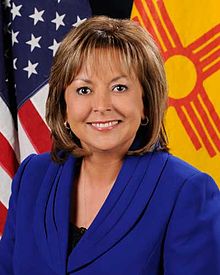 What follows is a letter that I recently forwarded to our NM Governor Susana Martinez regarding the removal of President Obama form the NM 2012 Presidential Election Ballot, which I am taking the liberty of sharing with you for informational purposes.

Please note that I have included excerpts from my letter to our NM U.S. Senator Tom Udall that I forwarded to him on April 11, 2012, which I believe relate to and/or further support my request for the removal of President Obama from the NM 2012 Presidential Election Ballot:

On January 19, 2012, February 29, 2012 and March 16, 2012, I wrote to you as a matter of courtesy to share letters that I had forwarded to Mrs. Dianna Duran, our New Mexico Secretary of State requesting that President Obama be removed from the New Mexico 2012 Presidential Primary Election Ballot because he is Constitutionally ineligible to hold the office of President and Commander-In-Chief.

For your information, I have never received a response to my requests from her office.

But be that as it may, what follows are pertinent excerpts from a letter that I forwarded to Senator Udall on April 11, 2012, which I am taking the liberty of sharing with you because I believe they relate to and/or further support my request to have President Obama removed from the NM 2012 Presidential Election Ballot:

“…Senator Udall when I was commissioned in the Marine Corps I was required to take the following oath:

“I, (state your name), having been appointed a (rank) in the United States (branch of service), do solemnly swear (or affirm) that I will support and defend the Constitution of the United States against all enemies, foreign and domestic; that I will bear true faith and allegiance to the same; that I take this obligation freely, without any mental reservation or purpose of evasion; and that I will well and faithfully discharge the office upon which I am about to enter. So help me God.”

This oath specifically states that the Constitution will be supported and defended against all enemies and it acknowledges that the enemy may be found on foreign soil or in one’s own backyard.

As you know, any commissioned officer and/or public servant who takes this oath and then conspires or is a party to an act or actions that seeks to undermine by purpose of evasion, the spirit and intent of the Constitution of the United States would fit the definition of a traitor.

What concerns and/or pains me immensely is that, although our own elected representatives constantly remind us that they support those troops that continue to give their all, to include their lives, to uphold and defend our Constitution, they stood by while Lt Col Terry Lakin was stripped of his honor and had everything taken from him, to include his freedom, for abiding by his oath as a military officer by having the fortitude to question President Obama’s eligibility to hold the office of President and Commander-In-Chief, as have many other Americans.

On or about April 7, 2012, it was revealed that while the American media provides cover for the Constitutionally ineligible Barack Hussein Obama, Vladimir Putin and the nation of Russia are reaping a treasure trove of defense secrets and missile technology by threatening to reveal the true history of the Manchurian Candidate.

Obama has spent millions to prevent his personal story from being revealed to the American public. Records have been destroyed, information has been hidden, false claims have been advanced, potential whistle-blowers have been threatened and official documents have been forged. Enabled by a complicit media and the craven cowardice of political opponents, the most egregious felonies in the nation’s history have served to make the American people easy prey for the schemes of a dedicated Communist and committed enemy of our Constitutional Republic.

And those schemes have included the betrayal both of the United States and her allies.

Under Obama’s programs, by 2016, defense will account for 20% of the national budget, yet bear over HALF of the deficit-reduction cuts.

In mid-March, Obama declared he would “…provide the Russians with detailed technical information about the anti- missile systems he plans to base in Eastern Europe…”

And Congressman Darrell Issa said that “the American people should be very afraid,” continuing with “I judge that in fact he is going to sell out our national defense after the election.”

On March 26th, Obama’s conversation with outgoing Russian President Dmitry Medvedev was accidentally picked up on an open microphone.  “This is my last election…After my election I have more flexibility,” Obama told Medvedev, who said he would relay that message to the new Russian “president” Vladimir Putin. “On all of these issues, but particularly missile defense this, this can be solved but it’s important for him (Putin) to give me space.”

Why would an American President need to secretly petition a notorious KGB thug for “space?” Because Vladimir Putin is aware of Obama’s criminal abuses of the United States and the American people.  He has Obama by the throat, possessing information which can put the Manchurian Candidate in prison for a lifetime. And he is using that information to literally blackmail the American president into betraying the U.S. and her allies around the world.

And though Barack Obama has certainly needed no persuasion to betray the American people and inflict massive damage on the United States since his election, that treachery is now proceeding according to a schedule and terms dictated by Putin, making the guilt of the American President even more obvious and his chances for re-election more tenuous. Thus, the plea for space.

How much MORE damage could the treasonous Barack Obama cause with another 4 years in power? And who might blackmail him next?”

For your information, and probably, much to your dismay, I will not be silent while I witness our Constitution being shredded before my eyes by what appears to be treason, while our local and national elected officials sit on the sidelines and allow it to happen.  It is quite evident to me, as it is to many others, that the cloak of darkness that has kept this travesty from the American people is rapidly coming unraveled as evidenced by the number of people that are currently coming forward to expose those individuals that took part in what I consider to be the greatest fraud perpetrated in American history.

Accordingly, I again am respectfully requesting that a full-scale investigation be conducted by both houses of Congress into the allegations made, on or about March 1, 2012, by Sheriff Arapio’s legal investigative team, known as the Cold Case Posse, which are supported by a preponderance of undisputable/credible evidence, to include sworn statements from witnesses around the world indicating an INTERNATIONAL CONSPIRACY TO DECEIVE THE AMERICAN PEOPLE, along with an abundance of additional questions that have been raised regarding President Obama’s eligibility to be our President and Commander-In-Chief of our armed forces.

For your information, I have also forwarded this same information and request to our other NM elected U.S. Representatives.”

Please feel free to contact me at my email or home address should have any questions and/or need any additional information from me regarding this extremely disturbing and time sensitive issue.

Thank you again for the excellent and professional job that you are doing as our state’s Governor.

Automatic Electronic Response Received From Governor Martinez’s Office Regarding My Email Above:

Thank you for taking the time to share your comments and concerns with my office. A constituent service representative will be in contact with you regarding your issue.

Thanks again to WND, ObamaBallotChallenge.com Staff and Sheriff Arpaio and his Cold Case Posse for their unwavering commitment and fortitude to continue the fight.

Word of Caution:  Although its great that many Americans are waking up and are actively taking some action to have President Obama taken off the 2012 Presidential Election Ballots we need to keep in mind that those individuals with unlimited sources and/or resources, to include the deep pockets of anti-American George Soros, our own local and national elected officials and others, with the help of the MSM, who have spent years planning and successively perpetrating what I now believe could be the greatest fraud in American history are not going to go down without a fight and thus, as a result, I also believe that now more than ever we need to stick together as Americans (it's no longer Democrat or Republican) at this crucial time when our country and/or Republic needs us more than ever to see this thru. A Republic for which so many Americans have and continue to give their all to uphold and defend.