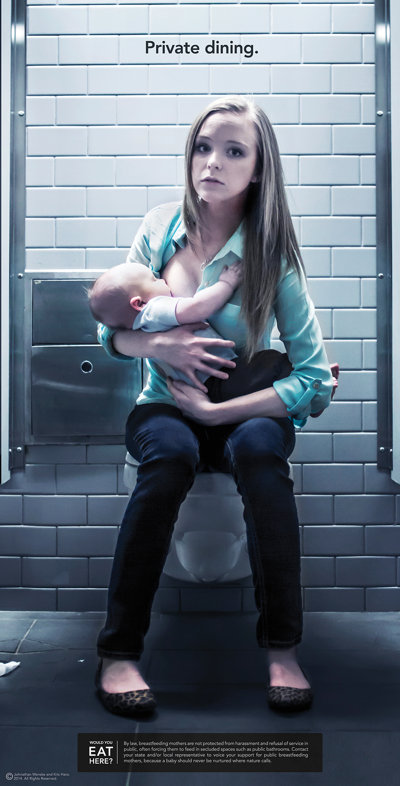 “Private dining. Would you eat here?” asks the text of one of poster, which features a photo of a young mother breastfeeding her infant while perched on the lid of a public toilet. Two other images in the series, of different mom-baby pairs, ask, “Bon appétit. Would you eat here?” and “Table for two. Would you eat here?” The campaign, called “When Nurture Calls,” is the work of University of North Texas graphic-art majors Johnathan Wenske and Kris Haro, both juniors. They decided to take on the polarizing issue of public breastfeeding for an assignment that required students to design a campaign for a social issue or product, as if it were being created for actual paying clients.

This is one of those recurring social debates and issues that seem to pop up quite frequently in one form or another. As a male it’s a bit of a delicate topic to openly muse about. But rarely have I seen the true issue at the heart of this debate addressed and perhaps it’s time that someone does.

Let’s be completely honest for a minute if we can. The simple truth is that if you have a your tank top pulled down to your waist and you are nursing a 1 1/2 year old while in the check out line at Wal-Mart chances are you are going to get some disapproving stares. If you do that enough places and enough times, someone may gather enough nerve to say something to you about it as embarrassing and upsetting as that may be for you. Tact and consideration for others while one is in public is part and parcel of being a full member of a respectful community and society.

The truth is that this is less about breastfeeding in public, though that is the topic label this movement is hiding behind, but about whether a woman should cover up, be discreet, seek privacy, or take into account the general shopping or dining public while doing so or just half disrobe whenever or wherever as the mood strikes or a hungry infant demands. As with many “controversies of the day,” it’s probably less about what one is doing than about how one is going about it doing it and the attitude of inconsiderate entitlement behind it. I have absolutely no proof to support this particular hunch, but one has to wonder if this current crop of activists is the same people who bared their midriffs and were parading their tramp stamps and belly button rings around for all to see in public just a few years ago. Perhaps they have just carried that same attitude, sense of borderline exhibitionism, and disrespect for others into the Lactivist motherhood realm.

Now I’ve seen some very inappropriate incidents on occasion where a woman was making a big scene and almost purposefully baring all and showing off in a very public place, and yet my wife breastfed our three daughters appropriately and we never had any issues with anyone, anywhere. It’s the ones who don’t know or don’t care enough to not make a scene that seem to provoke these types of controversies. One should not be overly surprised that they are occasionally called out for doing it.

If your attitude is that you can just whip your boob out whenever and wherever you want because you happen to have an infant in the general vicinity instead of perhaps using a bit more discretion or taking a couple of minutes out of your day to find a more secluded and less trafficked public space (or completely private area for that matter), then you probably deserve to be called out for your attitude and behavior by others once in a while. In fact, I encourage other women to help guide and steer these young women in the proper protocols of how to behave and act in public around others. It’s just not something a member of the male gender can do, so we have to leave it up to you. And we thank you when you do.

As we all should know, if you conduct yourself with decorum and respect for others nine times out of ten you will be respected and honored in return. The world is not a perfect place and, indeed, people can be jerks no matter how one may responsibly acts on occasion. But overall people will more positively react to you if you are not throwing attitude or defiance in their direction. The old adage of ‘treat people how you want to be treated’ is still a wise one and it wouldn’t hurt to apply it to this topic as well.

Common decency and respect for other is really not that hard of a thing to accomplish. One can still nurse and be modest. I see it being put into practice all the time so I know it can be done. Be discreet, cover up, and simply don’t put on a show or make a big deal about what you are doing and half the people in the vicinity won’t even notice and the other half won’t care. I’ve seen the extremes when it comes to breastfeeding in public and on at least two occasions both my wife and I were fairly appalled by the out of hand breastfeeding circus being played out in public.

In one instance, I was actually kind of angered that nobody had the nerve to say something to a particular mother who simply had no concept (or didn’t care) about the most basic measures of public decency. It was that out of hand. Just because you ‘have the right’ to do something doesn’t mean that right should not be exercised in a wise and discerning manner. Babies routinely go 2-3 hours between feedings. Why there is this sudden need to play out this all out sitting at the front bench at the entrance to Wal-Mart so you can glare at all those who dare a glance in your direction with less than affirming looks is beyond me. And there is certainly no need to be popping your nipple in and out of your toddler’s mouth every twenty seconds in the play place at McDonalds as your kid alternates between playing and two second refreshment refills from mom. I mean really, no one wants to see that. Feeding an infant should be a bonding and intimate moment between a mother and her baby, not a spectator sport.

Every time you hear about these terrible people bashing some poor mother who was merely trying to give her hungry child his mommy meal, look for the details or lack thereof in the story before you pass judgment. Was the mother being discrete and not causing a scene, or was she flaunting the act and being completely callous towards the sensibilities of others? I suspect that the source of many of these incidents is not the breastfeeding act itself, but the way it was being carried out. Those are two very different things. If you are harassing some young mother because she’d engaged in that particular act just because she’s doing it is one thing. Having to rein in a mother proudly displaying her goods in front of dozens of shoppers and the general public without any attempt at modesty or how it may affect others is quite another. If one is unable to comprehend the difference between the two you should probably not be engaged in this debate in the first place.

If you are one of these mothers who take pleasure in the ‘shock factor’ of flaunting, exposing, and just being generally obnoxious while breastfeeding in public, shame on you. It is because of you that there may be an increasingly hostile view towards all those who breastfeed in public. A few bad apples can ruin it for everyone so don’t be part of the problem, be part of the solution. While writing this article I solicited and received feedback from a number of my female friends who had breastfed their babies. Some noted that they have noticed a degree of increasing intolerance for public breastfeeding in general, but then went on to blame the aggressive, in your face breastfeeding crowd for provoking a possible backlash in public opinion. It is ironic that those who claim to be these great champions of person freedom in public are in fact undermining the very cause they supposedly espouse and are making it harder, more difficult, and uncomfortable for the average mom to attend to her infant. Don’t be that person who ruins it for everyone else. Remember, breastfeeding is best for babies and we’re all for it. We just don’t need to be invited to the show.

Just because you are a mother doesn’t make you suddenly completely above reproach or exempt from a general consensus of what is publicly acceptable behavior. At the same time, we should all give mothers the appropriate space and respect when they are attending to their infants needs and do what we can to accommodate them and make them feel comfortable. Both as individuals and collectively as a society. There is no greater title for a woman than wife and mother, and fulfilling the role of mother to very young children is not an easy one. Give them a little slack and room, both in public and private, and it will be greatly appreciated by all involved.

To sum this all up in easy to understand terms, basically nobody really cares if you breastfeed in public if you simply can’t wait or it is necessary. Just cover those puppies up and you’ll probably not hear a peep from anyone. Be respectful of others around you and they’ll be respectful to you and we’ll all be able to get past this manufactured controversy with our dignity intact and another generation of well fed and happy baby humans to show for it.