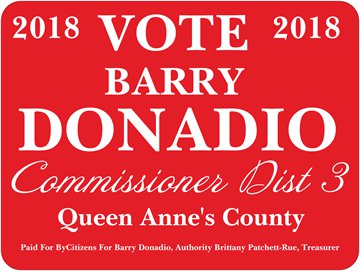 Many District 36 Republicans were in attendence with the membership of the CRW as well as Delegate Steve Arentz, Commissior James Moran, Diana Waterman (Former Chair of the MDGOP).

Donations were collected for the CRW “Wreaths Accross America” project.

Donadio met with members of the CRW and other Republican constituents at the gathering to talk more about his platform. He wants to keep the taxes low, create more job opportunities and fix the traffic issues in Queen Anne’s County.