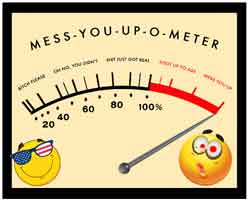 Don’t Let Social Media Mess You Up!, Go Directly To Your Source!!

While, Google, Facebook, Twitter are messing up little people on storm-tossed political seas in the dead of night, beacons like the New York Post, OAN, TeaParty.org, The Epoch Times, Whatfinger, Breitbart illuminate the coastline for all who are lost!

The takeaway from the gang-up censorship of Google, Facebook and Twitter trying to hide the New York Post story that purports to show emails from Hunter Biden linking his father to his Ukraine business dealings is for Patriots to go directly to the source.

Patriot truth seekers should bypass Google, Facebook and Twitter by going directly to the New York Post, which is in effect, returning to the once iconic newsies’ call, “Extra, Extra, read all about it!”

Mighty and totalitarian as they are Google, Facebook and Twitter can’t stop masses surfing the ‘Net from typing three little words “New York Post” on their devices, calling up the Biden Burisma story—word for word.

Social Media can’t possibly stop Patriots from knowing the name of the New York Post. They cannot stop them from going wherever they want to go on the so-called ‘Information Highway’.

It’s long been a fact of life that social media is censoring Republicans, Conservatives, Christians—and anyone else with whom they beg to differ.

“Republican Sens. Ted Cruz, Lindsey Graham and Josh Hawley on Thursday called on the heads of Twitter and Facebook to testify, and said a subpoena was in the works, as critics claimed the social media platforms have been censoring reporting critical of Democrats. (Fox News, Oct. 15, 2020)

“This is election interference and we’re 19 days out from an election,” Cruz, R-Texas, said. “It has no precedent in the history of democracy. The Senate Judiciary Committee wants to know what the hell is going on.”

“The Senate Judiciary Committee leaders announced they will vote on a subpoena Tuesday for Jack Dorsey, the CEO of Twitter, to testify before the committee on Friday, Oct. 23. Hawley said he hoped the committee would vote to subpoena Facebook CEO Mark Zuckerberg, too.

WHAT ACTION?!!  That would be one week before the Nov. 3 election, and four years too late, if you’re still counting, fellas!

Don’t worry, they’ll get back to the Senate Committee after election.

“The action comes as both Twitter and Facebook took steps to stop the widespread dissemination of an explosive New York Post report this week that purports to show emails from Hunter Biden linking his father to his Ukraine business dealings.” (Fox News)

WHAT ACTION?!!  "Stop pussyfooting around, fellas, the Democrats are trying to take your Republic into a Socialist Hell, 19 days from now in a 2020 Mail-in Vote Election—after which some of you may not even be there. (Fox News)

Subpoenaing the joker CEOs of Google, Facebook and Twitter will do no good because they will only lie and refuse to answer questions during testimony—just as they did in 2018.Back there, Facebook’s Mark Zuckerberg was given a chair cushion to add to his height.

Back there, Facebook’s Mark Zuckerberg was given a chair cushion to add to his height.

Arrogant creeps that they are, they will also LOVE the publicity. “The Senate Judiciary Committee wants to know what the hell is going on”, Senator Cruz?

They know what’s been going on, because the same thing went on during the 2016 election campaign, when the Senate Judiciary Committee and the GOP at large—with the exception of Donald Trump—did ZERO about it.

The masses are way ahead of the committee, being aware that the strategies of the Democrat-media gang-up are boomeranging back on them.

Just as their unrelenting vitriol hatred of Trump has made the president the quintessential underdog of all time, Social Media playing fast and loose with Internet surfers is coming about at the worst time—for them.

Uncountable millions are all at home in government-mandated lockdown with nothing much more to do than surf the ‘Net and join the Command Center.

Flipping the bird to the diabolic narcissists who run social media. It’s not We the People who are up against it, but the Communist China-friendly purveyors of propaganda in the social media who really are.

Meanwhile, while Google, Facebook and Twitter are messing little people up on storm-tossed political seas in the dead of night, beacons like the New York Post, OAN, The Epoch Times, Whatfinger and Breitbart illuminate the coastline for all who are lost.

Nothing’s stopping folk from going directly to their sources, flipping the bird to the diabolic narcissists who run social media.

You are not lost go to the source and of course the best source is TeaParty.org and TeaPartyorg.ning.com