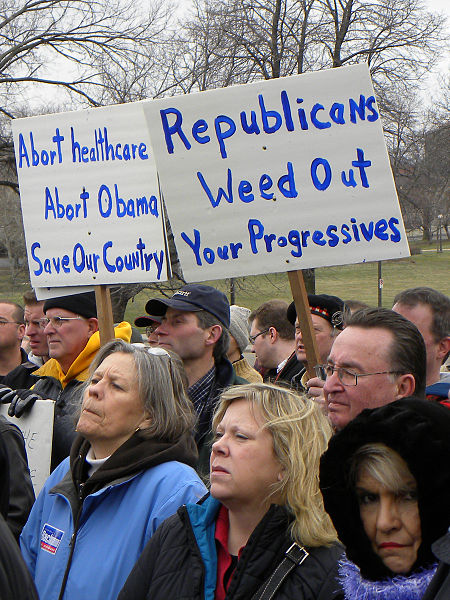 “You Americans are so gullible. No, you won’t accept communism outright, but we’ll keep feeding you small doses of socialism until you’ll finally wake up and find you already have communism.” Soviet Premier of Russia Nikita Khrushchev, 1959.

The seeds of the war on America’s principles and founding values were planted 54 years ago by Russia’s leader Nikita Khrushchev, and have found a cherished home in the presidency of Barrack Obama. It was this notion that communism would have a welcome home in the very seat of American power that The Tea Party members across the nation rose in defiance of. Obamacare was the fuse and much like America’s founding fathers’ rebellion against an evil imperialist power, freedom from tyranny was the clarion call.

With the ascendency of the Tea Party and the neutralization of the RINO grip on legislative power in state houses and congress in 2010, the president was waiting as were the pundits to unleash its RINO hell hounds on Sarah Palin, and any other Tea Party favorites to follow.

What is clear to Tea Party patriots as well as conservatives and most Americans who were seriously examining Obama’s actions, was his belief that Americans are gullible as Khrushchev stressed. The president and his minions in congress moved quickly and precisely to disassemble American military power, American economic prominence, and American moral principles and religious Christian values.

The only future that awaited America’s children was one which was staked to the barbed wire ideology of a socialist leader who apologized to Muslim nations for America’s Christian heritage. This was an administration that mocked parents who supported traditional values.

That is why it was predictable that Obama would create this false crisis called a government shutdown. He and his fellow travelers in the mainstream media and the White House knew that by simply letting Republican establishment RINOs unleash their fury on Senators Ted Cruz, Mike Lee, Rand Paul and even Sarah Palin, the liberal pundits could sweep in and create a greater GOP chasm.

But this was a campaign that was doomed to fail from its very inception. Liberals continuously underestimate the power of what truth and freedom mean to those who cannot be bought for thirty pieces of silver, or bribed with favored status on Air Force One rides.