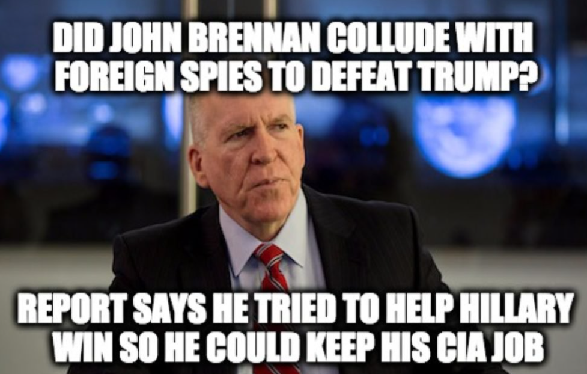 DID BRENNAN COLLUDE WITH FOREIGN SPIES TO HELP HILLARY?

John Brennan defended his thesis that Russia interfered in the 2016 election to help Donald Trump win before the Hoiuse Intelligence Committee. He did nothing to disabuse Congressional Democrats or the mainstream media of the notion that Team Trump colluded with Moscow to change the results of the 2016 election.

Brennan  didn’t explain why he thought that the Russians didn’t want Hillary Clinton to win. Perhaps Clapper could explain why they didn’t prefer Hillary who was Secretary of State when President Obama let Russia violate the INF Missile Treaty and colluded with the Russians to kill missile defense in Europe, telling Then Russian President Dimitri Medvedev to tell Putin he would have more “flexibility” after his reelection.

Clapper didn’t explain why he the Russians didn’t prefer Hillary, Secretary of State for an administration that did nothing when Russia annexed Crimea and invaded Ukraine. Why wouldn’t the Russians want the Secretary of State who called murderous Syrian dictator Bashar al-Assad a reformer and was there when President Obama drew the first of his “red lines” than did nothing to prevent the slaughter of 500,000 Syrians while giving Russia freerein in that country?

Why would Russia prefer Trump over Hillary after she and husband Bill brokered deals giving Russia and Putin 20 percent of our uranium supply to benefit  Clinton Foundation donors, including Canadian billionaire Frank Giustra.

As the New York Times reported, this mutual back-scratching gave Clinton donor Giustra control of a significant portion of the world’s uranium supply:

Late on Sept. 6, 2005, a private plane carrying the Canadian mining financier Frank Giustra touched down in Almaty, a ruggedly picturesque city in southeast Kazakhstan. Several hundred miles to the west a fortune awaited: highly coveted deposits of uranium that could fuel nuclear reactors around the world. And Mr. Giustra was in hot pursuit of an exclusive deal to tap them.

Unlike more established competitors, Mr. Giustra was a newcomer to uranium mining in Kazakhstan, a former Soviet republic. But what his fledgling company lacked in experience, it made up for in connections. Accompanying Mr. Giustra on his luxuriously appointed MD-87 jet that day was a former president of the United States, Bill Clinton….

Just months after the Kazakh pact was finalized, Mr. Clinton’s charitable foundation received its own windfall: a $31.3 million donation from Mr. Giustra that had remained a secret until he acknowledged it last month. The gift, combined with Mr. Giustra’s more recent and public pledge to give the William J. Clinton Foundation an additional $100 million, secured Mr. Giustra a place in Mr. Clinton’s inner circle, an exclusive club of wealthy entrepreneurs in which friendship with the former president has its privileges….

In February 2007, a company called Uranium One agreed to pay $3.1 billion to acquire UrAsia. Mr. Giustra, a director and major shareholder in UrAsia, would be paid $7.05 per share for a company that just two years earlier was trading at 10 cents per share.

Now isn’t that special. Both the Clintons and their donor made off handsomely. Uranium One, which was gradually taken over by the Russians, would later be involved in a curious deal involving Hillary Clinton when she was Secretary of State. As the New York Times reported:

At the heart of the tale are several men, leaders of the Canadian mining industry, who have been major donors to the charitable endeavors of former President Bill Clinton and his family. Members of that group built, financed and eventually sold off to the Russians a company that would become known as Uranium One.

Beyond mines in Kazakhstan that are among the most lucrative in the world, the sale gave the Russians control of one-fifth of all uranium production capacity in the United States. Since uranium is considered a strategic asset, with implications for national security, the deal had to be approved by a committee composed of representatives from a number of United States government agencies. Among the agencies that eventually signed off was the State Department, then headed by Mr. Clinton’s wife, Hillary Rodham Clinton.

As the Russians gradually assumed control of Uranium One in three separate transactions from 2009 to 2013, Canadian records show, a flow of cash made its way to the Clinton Foundation. Uranium One’s chairman used his family foundation to make four donations totaling $2.35 million. Those contributions were not publicly disclosed by the Clintons, despite an agreement Mrs. Clinton had struck with the Obama White House to publicly identify all donors. Other people with ties to the company made donations as well….

Soon, Uranium One began to snap up companies with assets in the United States. In April 2007, it announced the purchase of a uranium mill in Utah and more than 38,000 acres of uranium exploration properties in four Western states, followed quickly by the acquisition of the Energy Metals Corporation and its uranium holdings in Wyoming, Texas and Utah.

So Secretary of State Hillary Clinton, along with husband Bill, in exchange for donations, gave nuclear power Russia and Putin control of 20 percent of the world’s uranium supply. Is that what Hillary Clinton meant by a “Russian reset”? Yet neither Congressional Democrats, who accuse Trump  of being too cozy with Moscow, nor their wholly owned subsidiary, the mainstream media, are eager to talk about the Clinton uranium deals with Russia.

Based on this assessment, Brennan is wrong that the Russians wanted Hillary to win. They may have hacked into the DNC emails, but they didn’t write them. They didn’t keep Hilary from campaigning in Wisconsin, or make her motivate Trump supporters by calling half of them “deplorable”, or cause ObamaCare premiums to spike weeks before the November election.

There is another scenario as equally plausible as the one saying Team Trump, and perhaps President Trump himself, colluded with the Russians. It is that John Brennan himself colluded with the Russians to help Hillary win to guarantee his continued tenure as CIA Director. It involves the infamous anti-Trump dossier compiled by former British spy Christopher Steele, used by Brenan and others as a pretext for a Trump investigation bonanza.  As the American Spectator reported:

An article in the Guardian last week provides more confirmation that John Brennan was the American progenitor of political espionage aimed at defeating Donald Trump. One side did collude with foreign powers to tip the election — Hillary’s.

Seeking to retain his position as CIA director under Hillary, Brennan teamed up with British spies and Estonian spies to cripple Trump’s candidacy. He used their phony intelligence as a pretext for a multi-agency investigation into Trump, which led the FBI to probe a computer server connected to Trump Tower and gave cover to Susan Rice, among other Hillary supporters, to spy on Trump and his people….

The Guardian story is written in a style designed to flatter its sources (they are cast as high-minded whistleblowers), but the upshot of it is devastating for them, nonetheless, and explains why all the criminal leaks against Trump first originated in the British press. According to the story, Brennan got his anti-Trump tips primarily from British spies but also Estonian spies and others. The story confirms that the seed of the espionage into Trump was planted by Estonia. The BBC’s Paul Wood reported last year that the intelligence agency of an unnamed Baltic State had tipped Brennan off in April 2016 to a conversation purporting to show that the Kremlin was funneling cash into the Trump campaign.

Any other CIA director would have disregarded such a flaky tip, recognizing that Estonia was eager to see Trump lose (its officials had bought into Hillary’s propaganda that Trump was going to pull out of NATO and leave Baltic countries exposed to Putin). But Brennan opportunistically seized on it, as he later that summer seized on the half-baked intelligence of British spy agencies (also full of officials who wanted to see Trump lose).

The Guardian says that British spy head Robert Hannigan “passed material in summer 2016 to the CIA chief, John Brennan.” To ensure that these flaky tips leaked out, Brennan disseminated them on Capitol Hill. In August and September of 2016, he gave briefings to the “Gang of Eight” about them, which then turned up on the front page of the New York Times.

Could it be that Brennan himself is the leaker of classified information? There are reports suggesting he is and isn’t that what is going on in Washington these days – bogus investigations based on reports of collusion with the Russians and other shenanigans. Could that be any crazier than investigations triggered by the Steele dossier, a classic work of slanderous fiction? Two things we do know – that the only crime is the leaking of classified information to the newspapers to damage Donald Trump and that Brennan is wrong on ewho the Russians wanted to win.