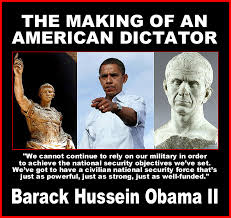 One must think about the many things that are transpiring right in front of our eyes and realize we’re held hostage by a dictator and traitor and so far the laws of our lands haven’t protected Americans or their Country.

Something is absolutely wrong with this scenario – we have laws to protect us from traitors and dictators and yet no group or groups of people seem to have the legal finesse or clout to put Obama out of office and behind bars. But, still I write today knowing that many Americans are still in “La La” land thinking they’re immune to the vicious grip of the distribution king.

It is self evident that Obama and his junk yard dogs all have immunity from the laws of our land along with an intense disdain for our Constitution handed down to us by our forefathers.  Obama, Clinton & Holder should be on America’s Most Wanted List.

Our money went to convicts, wasteful earmarks, “green” jobs in China, “green” jobs in Finland, the HARP program for Freddie and Fannie, millions in fact billions out the backdoor to Obama’s big bundlers.

He said, "So if this -- six months from now," Biden said, "if the verdict on this effort is that we've wasted the money, we built things that were unnecessary, or we've done things that are legal but make no sense, then, folks, don't look for any help from the federal government for a long while." This statement reeks of a Government gone bad! Doesn’t his statement make you feel warm, safe and comfy?

The “redistribution king” skimmed our money from us by creating non existent zip codes and non existent Congressional districts, green scams and our money disappeared overnight never to be seen again.

We’re suffering through five of the worst scandals in America’s history the Fast and Furious, Benghazi, IRS, NSA and Obamacare.  No one has been held accountable and billions of dollars have been spent on senseless poorly choreographed investigations.

Obama sailed smoothly into his second term by lying about the Benghazi murders and putting the tea parties under lock and key by the IRS.  Obama says 2014 will be the year of action, his talking points will be education, job creation, helping the middle class and amnesty for illegal immigrants, but this is just a guise allowing him to continue his “redistribution” scheme.

Bottom-line is this, the dictator who has committed treason will continue making his own laws as he goes the next three years, totally ignoring Congress and so far no one seems to have the guts or intelligence to stop him. Below some things to ponder. The betrayal of one's own country by waging war against it or by consciously or purposely acting to aid its enemies.

Dictator - a ruler with total power over a country, typically one who has obtained power by force.

What’s the difference between Weimar Republic and the Obama Administration?  No Difference.

The German Republic that succeeded the Imperial German government at the close of the First World War, otherwise known as the Weimar Republic, adopted a constitutional provision expressly enabling the President to rule by decree and without consultation with the legislative branch.