Decoding Flynn-gate: Russia, the Middle East, and the US Elections 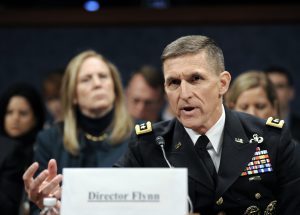 US Army Lt. Gen. Michael Flynn testifies before the House Permanent Select Committee on Intelligence in Washington D.C. on Feb. 4, 2014. (US Air Force photo by Staff Sgt. Jonathan Lovelady, via US Department of Defense)

EXECUTIVE SUMMARY: The FBI has concluded that ousted National Security Advisor (NSA) Mike Flynn’s contact with Russian ambassador Sergei Kisliak was not, in fact, illicit. Prior NSAs, aware that the Kremlin can influence close elections, have courted its “vote” for their candidates. Flynn acted as his predecessors did while protecting his back channel and his loyalty to Trump. The ongoing witch-hunt is emblematic of an unprecedented political power struggle in the US that reflects widely divergent policies toward Russia, the Middle East, and Ukraine.

Why was General Mike Flynn, Donald Trump’s National Security Adviser, fired? Did he do anything out of the ordinary by communicating with Russian Ambassador Sergei Kislyak during and shortly after the 2016 elections?

Former Ambassador Anatoly Dobrynin, as well as former acting KGB resident in America Oleg Kalugin, have both revealed in their memoirs that during close US presidential elections there were debates in the Kremlin about whom to “vote” for. The preferred candidate was whichever of the contenders was the less menacing for Russia and had the greater potential to unleash a new era of partnership. Moreover, aides to US presidential candidates have been known to actively court the Kremlin’s favor on behalf of their candidates. Election tampering goes in both directions.

As Dobrynin describes in In Confidence, in the tight 1968 elections, he viewed Democrat Vice President Hubert Humphrey as far preferable to the Republican candidate Richard Nixon, whom he described as “an anti-Soviet, Cold War warrior.” Based on Dobrynin’s reports, the Kremlin took the “unprecedented” step of “secretly” offering Humphrey financial aid. Dobrynin conceded that this was a “dangerous venture … if discovered it would have certainly backfired.”

Humphrey wisely turned the offer down, satisfying himself with “Moscow’s good wishes,” and never revealed it to anyone. Why did he not inform the FBI of the offer? Because had he done so, Nixon would have labeled him the Manchurian candidate.

But Humphrey was not the Soviets’ only choice. In The First Directorate, Kalugin reveals, “We in the KGB took a different view … We liked Nixon,” who could “take giant steps” towards improving Soviet-US relations. The reason for this, as the former KGB official explains, was that “no one could accuse Nixon of being soft on communism.” Kalugin had his man, Boris Sedov, develop a back channel with Henry Kissinger. Sedov then conveyed to the Kremlin that Nixon should be their man in Washington.

As the election approached, however, Humphrey was still the Kremlin’s choice. And so, as Clark Clifford showed in Counsel to the Presidents, Humphrey’s chief fan in the Kremlin, Premier Alexei Kosygin, helped Lyndon B. Johnson instigate an “October Surprise.” On October 30, 1968, LBJ, acting in concert with the Kremlin, agreed to a ceasefire in Vietnam. Meanwhile, Kosygin prodded Hanoi to open negotiations in Paris with the US and Saigon. Peace now beckoned – and with it, perhaps, a Humphrey victory.

But Nixon correctly interpreted Johnson’s move as a political stunt and torpedoed it. He instructed his emissary to persuade the South Vietnamese government not to participate in the negotiations on the grounds that they would get a better deal if Nixon was elected. Nixon thus squeezed out an election victory. Sedov continued meeting with Nixon’s aide, Richard Allen, for the next two years.

During the 1976 elections, the Kremlin had a slight preference for Nixon’s successor, Gerald Ford, who was a known quantity. However, on October 30, 1976, Ford’s NSA, General Brent Scowcroft, felt compelled to inform Dobrynin why the president had sent a virtual ultimatum to the Kremlin demanding that it permit Jewish emigration from the USSR. He revealed apologetically that, following Carter’s example, Ford had yielded to the demands of American Jewish leaders and asked Dobrynin for “patience and understanding for another 48 hours, until this madhouse is over.” After November 2, he promised, “everything was going to be back to normal.”

But Carter won, and the “madhouse” continued. Carter’s human rights policy would plague the Kremlin for the next four years.

Fast forward to March 1979. Richard Allen again courted the Kremlin, this time on behalf of Ronald Reagan. So did Scowcroft. Allen, drawing “a parallel between Reagan and Nixon,” indicated that a reset of the superpowers’ relationship was likewise possible under Reagan. Scowcroft advised that if the USSR “gave no trumps to Carter,” Reagan had a good chance of winning.

On October 16, 1980, Zbigniew Brzezinski came courting for Carter. He promised Dobrynin that Carter would adopt a soft line toward Moscow’s clients Angola, Vietnam, and Cuba. A US-Sino military alliance was also “absolutely out of the question.’’ The message was clear: Moscow should do nothing to diminish Carter’s election chances “and might even help a bit.”

On October 22, it was Kissinger’s turn. Now a private citizen, but acting with Reagan’s consent, he told Dobrynin that “The Reagan camp was fairly confident of victory absent some last minute surprise.” Moreover, Reagan “was not the mad, anti-Soviet right-winger” they may have thought he was.

In the end, the Kremlin “voted” to “stay on the fence.” Reagan won the elections and eventually embarked on a reset with Mikhail Gorbachev.

In 2012, President Barack Obama did his own marketing, promising outgoing President Dmitri Medvedev that “After my election I [will] have more flexibility.” Meanwhile, Mitt Romney declared that Russia “is, without question, our number one geopolitical foe,” a viewpoint that was openly mocked by Obama. The Kremlin’s “vote” was for Obama, although Putin was already blaming Hillary and her State Department for provoking protests during Russia’s December 2011 parliamentary elections.

In 2016, Hillary’s hacked e-mails revealed her as having been a major proponent of arming the rebels who killed Libyan dictator Muammar Qaddafi. As former defense secretary Robert Gates concluded in Duty, the Russians, who lost Libyan oil contracts, realized they had been tricked. They had not blocked a NATO intervention in Libya because it had been sold to them at the UN as a “humanitarian” effort to rescue civilians during the country’s civil war.

In 2015, having learned that Washington had been arming Syrian rebels against his client, Bashar Assad, Putin intervened militarily in Syria. He had watched Iraq and Libya become failed jihadist states after the deaths of their dictators, and was resolved to save Assad. It was not just oil contracts and future pipelines that were at stake, but also Russia’s heavy investments in upgrading Syria’s Port of Tartus.

The turning point may have come in the summer of 2016, when Hillary associate  Mike Morell, her likely CIA Director had she won, advocated “killing Russians” in Syria. In marked contrast, Donald Trump expressed a desire to work jointly with Moscow against the Islamists. Thereafter, the Russians sought to help Trump, their preferred candidate.

The unprecedented witch-hunt of Flynn-gate, now extended to Attorney General Jeff Sessions, is symptomatic of the enormous political power struggle in Washington, coupled with the deepening crisis of confidence in national institutions. It is also related to persistent divisions within US government bureaucracies over American relations with Russia, Syria, and Ukraine.

The new NSA, Gen. H.R. McMaster, can be expected to try to bridge these differences within a new unified framework. We recommend that the Trump administration not contemplate the lifting of sanctions without linking them to the conflicts in both Syria and Ukraine, and insisting on Russia’s compliance with the Minsk agreements.

The purge of Flynn is only the hors d’oeuvres. The calls for Sessions’s resignation and for the naming of a special prosecutor indicate that the sharks are hoping for the chef d’oeuvre – Trump – as the Manchurian candidate.

Dr. Jiri Valenta and his wife, Leni, are the principals of The Institute of Post Communist Studies and Terrorism (jvlv.net). They are authors of a forthcoming book on Russia and US interventions in the 21st century. A prominent author and speaker, Jiri served for decade as a professor and coordinator of Soviet and East European Studies at the US Naval Post-Graduate School and former consultant to senior members of Reagan administration.