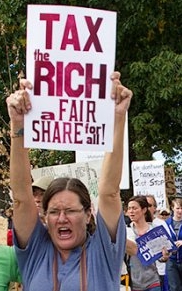 My middle child brother David is a great guy and a thinker. He has worked full-time in a factory for years, but coached little league football for several years growing to become Commissioner of the County Youth Football League. David has noticed America's cultural decline reflected in the attitudes of kids in his football programs – no fear or respect for authority. David is non political – does not listen to talk radio or watch Fox News. Thus, he does not connect the cultural decline to politics.

While my brother is extremely bright, I view David as being representative of the masses, so-called low-info-voters who reelected Obama despite his horrific record and crimes against freedom/the Constitution. Ironically, despite being ignorant of the term, David is very Conservative in his personal life.

So, this is my challenge. How do I help David (the masses) to understand that Liberalism is at the root of America's decline and that Conservatism is the solution?

Admittedly, my task is Herculean given that liberals control the media and are fully on board with Obama's plan to transform America into a country ruled by a socialist dictator. When David hears Obama's plans to take care of everyone, it all sounds fair, Christian and just. How do I get David to realize Obama is a pied piper playing a seductive tune leading us to hell?

“Identify the dominant philosophy of a society and you can predict its future.” Ayn Rand

Obama and company are swiftly making socialism the dominant philosophy leading to the end of America's role as the Land of the Free. Far too many Americans believe individual rights and pursuits are evil. They hate the rich and believe it is morally correct for government to confiscate and redistribute their money.

Every major gift to the world was the outgrowth of someone trying to make a buck and/or a better life for themselves and their family. There is nothing evil about that. As a matter of fact, the Bible says, “A good man leaves an inheritance for his children's children... ” (Proverbs 13:22) This biblical goal will be impossible if Obama and his supporters have their way. They seek to take most of your kid's inheritance while you are alive and show up at your funeral to collect even more – death tax. Inheritance? Forget about it! This is yet another example of how liberal philosophy is incompatible with the Human Spirit and God. When I worked for Westinghouse Broadcasting years ago, a fellow employee said the company should not earn a profit. He believed the business's sole purpose for existing should be to provide jobs. I was stunned. This is the crazy way liberals think. Interestingly, while this employee hated the rich, he was intrigued and envious of the trappings of the rich -- a trait which I have observed in many liberals.

While claiming to have superior compassion for the common man, liberals display a condescending superiority when dealing with common folks.

Another truth that liberals reject is when you pursue your dreams, you inevitably enrich the lives of others via jobs and opportunities. Capitalism is a good thing and it works.

Years ago, my buddy Jean Claude purchased an old house to transform into his family's dream home. I needed a job. Jean Claude hired me to work with his contractor. Thus, Jean Claude's pursuit of his dream blessed me with income.

Most Americans who are fortunate enough to have jobs are employed by small businesses - millions of Jean Claudes pursuing their dreams; blessing people with income and opportunities. And yet, somehow Obama and company have successfully demonized dreamers/entrepreneurs, portraying them as selfish SOBs who are not paying their fair share. “If you have a business, you didn't build it.” President Barack Obama

Truth is, the top ten percent of income earners in the United States pay almost half of the country’s total taxes. Half the country does not pay Federal income taxes. And yet, Obama relentlessly campaigns to inspire hatred for the rich, convincing the masses that the rich are screwing them.

One article will not educate my brother David to the virtues of Conservatism and the evils of Liberalism. I must stay diligent in my quest for the perfect approach that will cause David/the Masses to “see the light”.

On a positive note, for the first time, while watching a Christian TV network, David recently heard about Obama's attacks on Christianity. He was shocked. I thought, “Cool, David does not listen to Rush or watch Fox News however, he does watch Christian Broadcasting. Though his recent education is only a crack into his psyche, I am grateful.”

“I am done. I will never vote democrat again. I get it. I am buying a book by Star Parker called Uncle Sam's Plantation. U are right. Keep it up!”