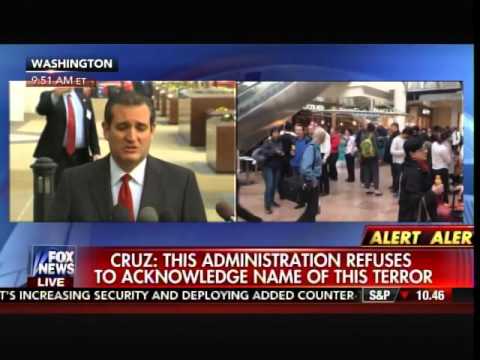 In response to the Islamic terrorist attack in Brussels, along with other commonsense solutions, Ted Cruz cited the success of the NYPD Muslim surveillance program.

Well, the mainstream media and Democrat talking heads went nuts, launching their usual shock-and-awe attack on anyone who refuses to bow their knee in worship to their god of political correctness.  The left called Cruz an idiot and a racist, demanding his head on a platter.

And yet Cruz has not wavered, not walked back his solutions or blinked in his resolve to protect Americans.  That's what I am talkin' about, folks.  Ted Cruz is a rock-solid, character-driven, backbone-of-steel conservative, sold out to defending and advocating for We the People.

The Islamic terrorist attack in Brussels happened in the middle of a highly contentious U.S. presidential campaign.  This is a time when candidates are typically extremely cautious about what comes out of their mouths, careful not to P.O. any group of voters.  Cruz's immediate instinct was to throw political correctness to the wind.  Cruz immediately came out with solutions rooted in the best interest of the American people that infuriated the left.  Again, that's what I am talkin' about, folks.

There is an old parable about a man who was trapped on his roof during a flood.  He prayed for God to reach down His hand and rescue him.  He drowned.  In Heaven, the man asked God why He did not answer his prayer.  God said, I did.  Before the water got too high, I sent a guy in a pickup truck.  Then I sent people in a rowboat.  Finally I sent a helicopter.  You rejected them.

Folks, since 2008, alongside millions of patriots, I have been fighting Obama and his leftist associates' implementation of their fundamental transformation of America.  Attending over 500 Tea Party rallies over the years, I have held patriots' hands and prayed for God to restore our great land.

We prayed for God to raise up strong conservative leaders who will keep their word when we send them to our nation's political Sodom and Gomorrah (Washington, D.C.).  Sen Ted Cruz is among a rare few we sent to Washington who has remained true-blue to We the People and our Constitution.  Cruz has paid a huge price for courageously standing up for We the People – hated by Democrats, the GOP establishment, and the mainstream media.

This is why, for the life of me, I cannot understand why anyone would not enthusiastically vote for Ted Cruz.

Patriots in heaven will say, You promised to bless those who bless Israel and curse those who do not.  Why did you allow government to betray our longtime ally, Israel?

God will say to those patriots, I answered your prayer, but you rejected it.  I sent you Ted Cruz.